Asim Rafiqui on art institutions and their collusion with the politics of imperialism.

This below is the sort of cultural whitewash that the West desperately clings to, and the appeasement that "others" desperately offer. The entire concocted narrative of "cultural understanding" and "cultural exchange" carefully elides the hard and obvious ugliness of crass political, economic, and military realities that defined the relationship of the Middle East to European colonial powers and more recently to American imperial control. The Aga Khan would do better than to offer sops to a discourse that serves the interests of political power, and continues to negate the struggles of people trampled with impunity and with extreme violence at the hands of the so-called "Western world." 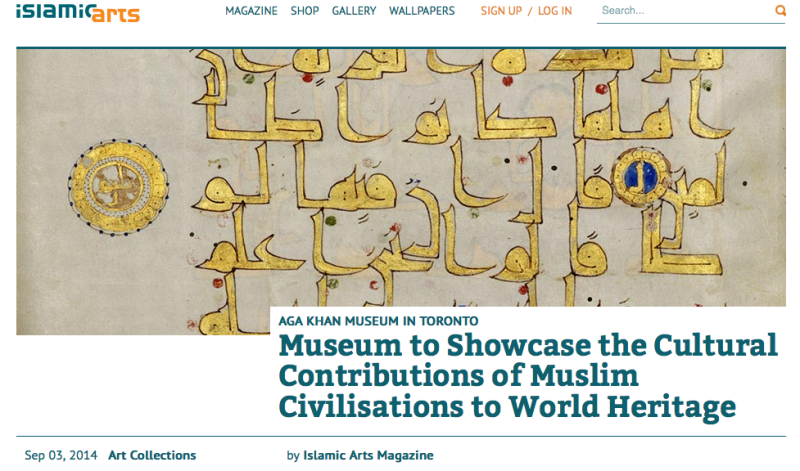 Screenshot from the Islamic Arts Magazine website taken on 9/3/14.

The Aga Khan is quoted as saying:

"One of the lessons we have learned in recent years is that the world of Islam and the Western world need to work together much more effectively at building mutual understanding, especially as these cultures interact and intermingle more actively," commented His Highness Aga Khan. "We hope that this museum will contribute to a better understanding of the peoples of Islam in all of their religious, ethnic, linguistic, and social diversity."

We have to question this "clash of culture" nonsense. In particular, those confronting the so-called West have to do so with intellectual and moral courage, and not with mealy-mouthed niceties about "mutual understanding." Asking the occupied, the displaced, and the invaded to create "mutual understanding" with their oppressors is to strengthen the hand of the oppressor, and to erase the history, politics and sensibility of the oppressed.

These fraudulent "cultural" events and institutions are part and parcel of a process of erasure of the politics of "the other." They are a close partner in the structure of thought which aims to bifurcate a human political force into "good" and "bad" Muslims—a false construction that reduces people into either collaborator or terrorist dichotomies and negates any possibility of complex political engagement. The Aga Khan is walking the wrong path and strengthens the hand of those who are determined to wage war, to steal, to use violence for base, material political and economic goals.

These institutions are also a clear reflection of the weakness of those who wish desperately to be invited to the dining room of power, a need to bend over and beg for crumbs by pleasing the masters, offering them soft, pointless, depoliticized trinkets that will somehow convince them that "we" are worthy. The discourse ranges from "Islam is a religion of peace" to these overblown museums' desperate attempts to show that "we" are worthy and that "we" are "civilized." It's as if the wars and the violence are nothing more than a misunderstanding. Who gives a shit if Islam is peaceful or not? Why is this never asked about any other faith, including capitalist secularism? How is this even relevant in the face of the dogs of war unleashed in the region for decades?

This is a moment of hard, clear, measured, and honest political engagement and confrontation. This is a moment to speak truths to power. To confront it not with apologetics, but with evidence, with rights, with demands, with law, and with strength. This is not about "mutual understanding." Go ask that of the family whose sons were tortured and raped to death in Abu Ghraib, or a child whose family was torn to shreds by a wayward drone, or to any of the millions affected by our invasions of Iraq, Libya, Afghanistan, Somalia, or even any one of the families whose sons and husbands were entrapped in fake terrorism cases and had their lives torn apart. Ask them for "mutual understanding" and to bring their trinkets of civilization to the fine and peace-loving people of the West to convince them that they are worthy of not being killed. Then see how inane and irrelevant all this sounds.

These projects simply entrench arrogance, and repeat, as Partha Chatterjee as argued, a derivative discourse of imperial power. They elide political facts and military realities. They avoid asking the hard questions and offering the clear evidence. They prefer to dwell in "culturalist" narratives, something that suits those who make their decisions based on specific power and political goals. They never accuse, they never question, they never critique, they never refuse, and they never dissent. This sort of game cannot continue. A radical political dissent is needed if we are to even pretend that we are in open and democratic spaces. Writer Arun Kundnani commented in a recent interview:

"I think terrorism is the product of closing down political space, political engagement and political participation," he says. "So, think about the end of 19th century when you had anarchist bombers. All of them were veterans of Paris communes. A moment of political defeat gives rise to terrorism, such as the IRA in Northern Ireland. They start to get involved in violence when the civil rights movement, non-violent movement are suppressed, right? Similarly, the African National Congress turned to campaign of bombing and sabotage once the peaceful attempt to fight apartheid was suppressed. So this is the pattern you see. If that is right then creating opportunities for people to advance their political agendas through non-violent means is actually the best way of reducing the risk of terrorism."

We do not need museums to display imagined histories of "past" civility, but podiums to express our radical political voices and fulfill our participation and our rights as citizens of our societies.

column by Esther A. Armah
BEWARE! Statementism and Tweak-o-nomics
Conversations by Nathan Suhr-Sytsma
What binds us, in this boat: Poet ‘Gbenga Adeoba on migration
blog by Warscapes
Open Call: The Corona Notebooks
Reviews by Nirupa Umapathy
The War on Terror Goes on Trial
Art by Melissa Rodriguez
Art becomes therapeutic for refugees
Art by Claudia Zini
Beauty, Brutality and Roma Identity in Selma Selman's Art
Poetry by Andy Young
Two Poems
blog by Bethan Staton
Imagining Palestine’s future
Art by Ermias Ekube
Artwork by Ermias Ekube
Art by Hollie Davis
Presence in Art and Activism
Like any of the articles? Support our work.
Donate Now