Sudan has been back in the headlines in recent weeks. Reports coming out of South Sudan suggest that the world’s newest state is sliding into what's been described as inter-ethnic fighting and mass ethnic killings. To be fair, the power struggle behind the purported ethnic dimension of the conflict has been highlighted in some media; yet, there seems to be no escaping the habit of attaching “ethnicity” to the conflict. To take just one prominent example, the Washington Post stated that in ‘South Sudan’s case, the divides are ethnic. Or rather, they began as ethnic and have since become political.’ 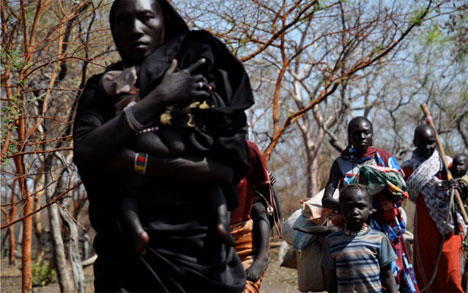 This is nothing new: reporting on Sudan has been plagued by such biases for a long time. The twenty-two year civil war between North and South—which concluded with the signing of the Comprehensive Peace Agreement (CPA) in 2005—has oftentimes been defined as a fight between the predominantly Arab and Muslim north and rebels in the mainly Christian and animist south. In this case, religion—one of the markers that define ethnicity—occupied pride of place as the main catalyst for conflict, conveniently overlooking the role of colonial legacies in fuelling war, among other factors.

Similarly, unrest in the Western region of Darfur—where the population is overwhelming Muslim—has been generally attributed to the ethnic cleavage between Arabs and non-Arabs, namely African groups such as the Zaghawa, the Massalit and the Fur. In this way, the intricate political economy of the relationship between sedentary farmers and nomadic cattle and camel herders has been glossed over as a root cause of conflict. Put differently, competition over material resources in the face of growing populations, marginal habitats, and an unprecedented ecological crisis offers a much more compelling explanation of the origin and continuation of conflict between the region’s communities than seemingly a-temporal cleavages along ethnic lines.

The very concept of ethnic conflict is problematic in several respects. Firstly, it seems to suggest that markers of identity (“ethnicity”) are at the origin of socio-political violence. While diversity engenders tension in any society, it cannot account for the viciousness of war. Most often, divisions along community—so-called ethnic—lines are the result of conflict and cannot alone explain sustained violence, whose root causes have to be found elsewhere. In other words, wars the world over may be fought under the banner of identity, but it is the underlying issues of political and economic power that start and fuel them.

Consider Yugoslavia. For years, journalists filed countless dispatches describing the raging ethnic conflict in the federation, which was ascribed to age-old hatred between Serbs, Croats and Bosniaks. Religion was also added as a driver of the war, as—roughly speaking—the first are Orthodox, the second Catholic, and the third Muslim. However, war in Yugoslavia broke out within the historical context of the fall of the Berlin Wall and the federation’s loss of the privileges accruing from non-alignment, given Josip Broz Tito’s leadership role within the Non-Aligned Movement (NAM). Likewise, a decade of structural adjustment preceded the war, including the 1989 ‘shock therapy’ package, which wreaked havoc on the country’s social fabric and undermined the delicate balance of resource redistribution between the federation’s republics. This created the structural conditions for war, where different elites fought over their share of the Yugoslav state.

Secondly, ethnicity is as hazy a concept as nation, a fact that severely limits its analytical potency. That the former is used—inter alia—in the context of Africa, the Balkans and Central Asia raises the suspicion that an inherent prejudice is at play, whereby some people have ethnic groups and others—read: Westerners—have nations. In 1978, anthropologist Ronald Cohen wrote that "in ideological terms, 'tribes' are a fundamentally colonial  concept derived from the Latin term tribus meaning barbarians at the borders of the empire. This etymology reflects and explains the significance of the word in Western culture, its link to imperialist expansionism and the associated and overgeneralized dichotomization of the world's peoples into civilized and uncivilized—the 'raw' and the 'cooked' of human historical experience."

Arguably, the same dynamics apply to the term ethnicity, the implication being that civilisation has by-passed some, and blessed others. Not surprisingly, the two terms are at times used synonymously. Actually, the Greek word ethnos, from which ethnicity derives, used to also mean a “caste” or “tribe,” and in the plural a foreign, barbarous nation, as opposed to the civilised Greeks.

“Ethnic conflict,” finally, appears to assume that identities are immutable through time, contradicting the very claim to historicity that purportedly undergirds it by creating a fictional uninterrupted continuum between the past and the present. As a variation on the same ethno-religious theme, it has become fashionable in the last few years to use sectarianism as the main frame of analysis for conflict in the Middle East. Thus, Syria is part of a wider religious sectarian war; Lebanon may become the centre of the Arab world’s sectarian wars; and the on-going troubles in Iraq are simply a manifestation of centuries-old sectarian strife endemic to the broader Middle East. In this way, modern warfare over the distribution of political power and economic resources at the national level, along with the meddling of regional and international actors, is written off as age-old animosity between Islam’s two major sects: majority Sunnis and minority Shiites.

As Abdullah Hamidaddin eloquently explains, such lines of argument are as absurd as attributing current European-Turkish wrangling over Turkey’s EU accession to the ninth century conflict between Charles I, King of the Francs, and the Byzantine Empress Irene in Constantinople, modern-day Istanbul. And still, sectarianism has been deployed as the explain-it-all framework for understanding conflict in the Middle East. In contrast, the role of the 2003 US-led invasion of Iraq in polarising communities, along with the occupier’s post-invasion mismanagement of the country—when not a deliberate policy of “divide and rule”—are expediently relegated to the background, if at all mentioned.

Explaining conflict through ethnicity or sectarianism is tantamount to explaining terrorism through religion. “I remain deeply sceptical that we can read people’s political behaviour from their religion, or from their culture,” Mahmood Mamdani states in his seminal essay, Good Muslim, Bad Muslim: An African Perspective. He suggests that debates about culture be set in their historical and political-economic context.

This is hardly a pedantic academic exercise, as some might contend. Quite apart from revealing a strong bias on the author’s part, a-historical claims of ethnicity and sectarianism risk “transforming conflict within elite circles over economic choices into non-negotiable questions of identity,” according to Susan Woodward, a scholar of Balkan politics and leading expert in the study of civil war. Not incidentally, these kind of readings feed into the discourse of those actors who have a vested interest in the perpetuation of violence. Getting a conflict right is the first step to resolving it.

Franco Galdini is a former Peace Fellow at the Rotary Centre for Peace and Conflict Resolution Studies, Chulalongkorn University, Bangkok, Thailand. In 2013, he was the political and media analyst at the UN Commission of Inquiry on Syria.