Globalization, while retaining the veneer that it brings communities and nations together also threatens our identities as individuals and as societies as we incorporate and assimilate the world around us. The growing dependence on each other presents a challenge to humanity, which has always held a poor record of struggling with differences. David Palumbo-Liu’s book, The Deliverance of Others: Reading Literature in a Global Age ponders how to accomplish a kind of harmony and resolve the many challenges that globalization brings about.

In The Deliverance of Others, Palumbo-Liu speaks to how we as individuals and a global community read or interpret each other and how literature is involved in delivering these ideas. When Palumbo-Liu speaks of “deliverance” in the title, he isn’t talking about one’s being saved from something in a biblical or spiritual sense, but rather how our “ideas of rationality, of the family, of the body,” and other concepts are delivered or brought to us through various “delivery systems.” In other words, deliverance is how the ideas of globalization are brought to us. These ideas, which can come in many forms, are a type of literature that can be compared and contrasted for their “sameness” and “otherness.”

Palumbo-Liu continues that in a world of globalization, the lines between others and the self are blurred in that we are all in the same “global ‘situation.’” Our separation from these others is removed as we begin to share the same “economic, political, social, cultural, ecological, epidemiological” situations. And so, globalization, in effect, challenges the idea of the other as we begin to be the same.

Despite this sameness, the concept of the self is still very strong. As globalization brings a type of tolerance, it also encourages “selfishness” as groups gain courage sufficient to represent their selves. Today’s 24-hour news cycle is replete with examples of outraged groups responding to the tweets, posts, and comments of others. Palumbo-Liu writes, “For many, the explosion of multiple forms, venues, and delivery systems, … is a liberating and democratizing possibility.” The internet and social media have become delivery systems creating an ever-increasing global situation; a situation that, again, creates more contact with “others,” and as such, more opportunities to observe and respond to the sameness and otherness of those we read.

For as much romantic liberal humanists welcome the opportunity to share the planet, the novel suggests that without a foundation of reasonable belief to secure the project, we are at a loss to survive the tidal wave of difference.

He continues that “the ‘globe’ will outdo us, not because of its mass or multiplicity, but because we have no workable political instrument with which to mediate and negotiate a settlement.” I likewise find that J.M. Coetzee in Waiting for the Barbarians frequently uses symbols of otherness to illustrate the complexity and futility of communication, perhaps because of insufficient means to “mediate and negotiate a settlement.” Though society may share situations, as others, we often rationalize situations differently, thus creating disparity in our interpretations, because we are not entirely the same.

In the preface, Palumbo-Lui explains that The Deliverance of Others was born during a conversation about rational choice theory. He explains, “‘people act on the basis of common ways of reasoning.” He continues, “This kind of thinking undergirds our sense of how we behave towards each other and think about the world.” In this respect, literature first acts as a delivery system of sameness and otherness, and second as a delivery system of ideas that affect our behavior.

In the 1990s, Patricia Bizzell famously introduced the idea of “contact zones.” Like Palumbo-Liu’s use of sameness and otherness, Bizzell discusses how differing cultures interact as they have contact. I remember my linguistics professor, Dr. Kenneth Pakenham, saying as much in discussing the contact between the Vikings and Anglo-Saxons in the early days of the English language. The two warring cultures were very different, and yet over time, their shared situation created sameness between them. They agreed to a truce, they intermarried, and then they began to share language and stories. The most famous example is that of Beowulf. Beowulf doesn’t take place in England, but in Denmark, where the Vikings came from, and yet it is written in Old English — a conglomerate of Anglo-Saxon and Old Norse — the fruit, if you will, of their contact. Thus, a language that began in otherness became the English that we share today.

Recent trends in academia have investigated the idea of literature being studied in terms of contact zones as opposed to chronology or geography. Doing so would explore further how these works of literature act as delivery systems of sameness and otherness, and how the behavior of peoples at the time was affected by it.

Throughout the text, Palumbo-Liu examines not only our perceptions of others, but also how our physical bodies relate to others. For example, he investigates the complexity of having an organ transplant, where the foreign organs of another are placed into one’s own body. In this, Palumbo-Liu identifies how we are sometimes forced to reconcile our sameness and otherness with other humans physically in nonsexual ways. Further, he discusses how biotechnology further complicates the issue, as something inhuman can become part of our human selves.  These are only a few of the complicated situations that we are forced to rationalize as we attempt to understand all of our relationships — both human and inhuman, physical and social.

Palumbo-Liu concludes that reading will be a self-reflective act that puts the question of ethics before all else. Here, Palumbo-Liu’s argument about rational choice theory comes full circle. Reading doesn’t just deliver others to us, but is also requires that we make ethical decisions, and as such, it affects our behavior.

Our literature is an expression of our shared global situation — a situation that will continue to challenge how we respond to the sameness and otherness of everyone and everything we come in contact with. If this movement towards globalization continues, we will continually be asked to reconcile the sameness and otherness that are delivered to us. Perhaps this will lead to the instrument both Coetzee and Palumbo-Liu long for — the means to resolve our otherness.

Jacob Dee Lauritzen, MA is an English Teacher at Fort Thomas High School and an Adjunct English Instructor at Eastern Arizona College. He is currently working on his first novel and hopes to have it completed in the coming months. You can listen to his podcast, The Uncommon School, at http://bit.ly/T0ygZi and follow him on Twitter @jdlauritzen
Topics:
Jacob Dee Lauritzen
Globalization
David Palumbo-Liu
book review
Region:
Asia 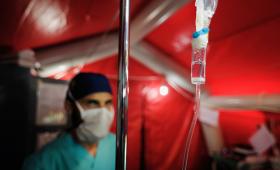 The Deliverance of Others: Reading Literature i...
Paperback
$24.77
Buy from amazon.com