Monica Ong’s debut collection, Silent Anatomies, won Kore Press’s 2014 First Book Award. The book is a hybrid of poetry and image, engaging multiple senses when addressing the body, silence, and cultural history. An experiential autobiography, these poems interrogate the space of cultural silences – most notably, those that shame the female body and illness. Ong brings to light these personal stories, thus reclaiming narrative, agency, and voice.

A Kundiman fellow and graduate of the Rhode Island School of Design’s Digital Media MFA program, Ong utilizes image-poems to create tension throughout. Moving seamlessly through language and image, readers are met with nuanced narratives and questions. As Joy Harjo, the judge for the First Book Award, writes: “Poetry unfurls within, outside and through images.” Our experience of seeing and reading Silent Anatomies is first and foremost, with Ong’s careful direction.

At the center of the Silent Anatomies is Ong’s desire to spotlight cultural silence and social shame when speaking about the body and health. She moves through her transnational history in China, the Philippines, and the United States via the physicality of the body: the lungs, the veins, the arteries. These image-poems grapple with lineage and one’s place in the world. Indeed, what happens with you speak to the ghosts of your history – ghosts who have remained silent until now? 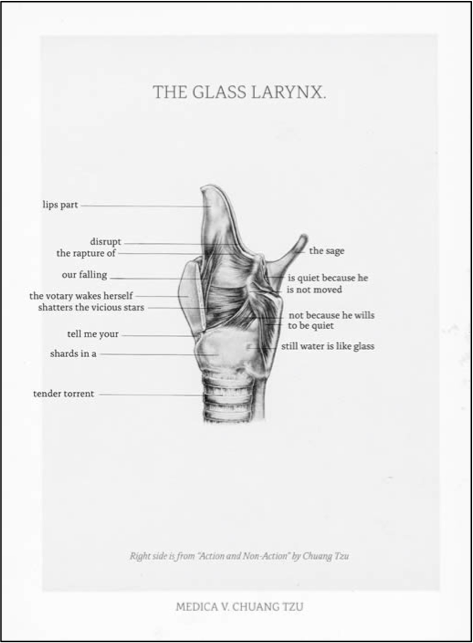 What occurs is a breakage of barriers – including how we tell stories.  The book itself is an art object – inviting to the eye. We want to reach out and touch these images since the language is so visceral. Ong’s collection also recalls work by other multimedia Asian American poets, including Theresa Hak Kyung Cha. Indeed, Cha’s DICTEE (1982), which engages text and image throughout, emphasizes the experience of reading over the book’s “aboutness.” With Cha’s book, we begin with an image of rubble. At once personal and impersonal, this image of a barren landscape encapsulates Cha’s preoccupations with home, which is anything but a rooted, bounded, and identifiable space.

Likewise, Ong’s Silent Anatomies begins with an image that unmoors us. The poem “Bo Suerte” opens with a family photograph on the left. Elements of separation are clear in the image: the girls pose on the left and the boys on the right. No one smiles in the photograph. The first line reads: “Mother, each day I look for you.” This line is direct and honest – there is no hiding behind metaphor or simile. This striking poem moves tonally from blunt to soft: “The way your long locks fell like black feathers onto the kitchen floor.” Coming back to the stark photograph, Ong writes: "Portrait as battle." 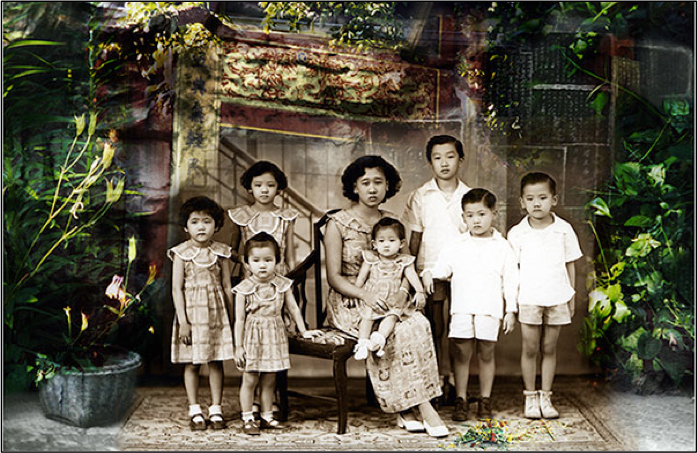 As a “battle,” these image- poems invite complicated emotions and allegiances. Indeed, who are we loyal to? The most impactful poems in Silent Anatmonies are the poems written on medicine bottles, with “directions” on the labels. Here, home remedies are rooted in value systems. These faux labels consider cultural conceptions of health, particularly gender value systems. In “Fortune Babies,” Ong writes: “Does not guarantee protection from bearing daughters. Consult your fortune teller if you suspect your pregnancy may be at risk.” In other medicine bottle poems, Ong offers dictionary entries on the label – interrogating linguistic colonialism. Such poems recall Harryette Mullen’s Sleeping With the Dictionary (2002). For instance, one bottle features an image of an older woman, followed by the words “withstood,” “withy” “witless,” “witling,” and “witness.” These words highlight our gender and age expectations – that we see older women as passive and “witless.” Ong exposes such shameful stereotypes throughout. Moreover, through these dictionary labels, she underscores the hierarchy of the English language, highlighting the “prescriptivism” of language as a silencing tool. By “prescribing” English through a dictionary entry, Ong questions why and how we speak today. Here, the English language participates in a traumatic act of othering within immigrant narratives. Indeed, who speaks English and who does not? In another medicine bottle poem, she writes about English and erasing the mother tongue: “Lose your accent in 30 days – guaranteed.”

Toward the middle of the collection, there is a diagram of lungs, which simply reads “Metal Lungs”. By contrasting these two words, Ong creates a strange, eerie feeling of the natural meeting the unnatural. How can our lungs be metal? How can we breathe with such a hard element? The subject of violence, which is threaded throughout, is similarly uneasy and half-lit. She writes: “You could say the wind/had been knocked out of her -/black tangle in his thick fingers…” Above these lines, there is a blurred image of a face, with the eyes cropped out. The violence implied in these lines is not fully formed, not fully at the surface. Such half-silences recalls DICTEE once again, as Cha writes about the difficulty and pain of speaking: “The wait from pain to say. To not to. Say.”

Ong addresses the painful process of telling these stories (and why it is difficult to say it fully). In another poem, there is an image of a hand touching the peeling bark of a tree: “[And who in this white cube/can decipher the endangered dialect/thinning in her throat?]” The throat, a vulnerable space of the body, is thinned out – unable to carry such words. The use of brackets also adds to the difficulty of speaking.

Such lines powerfully address the pressure of telling a story, of reimaging the story, because no one dares to speak about violence and the body. Yet, as Ong insists, she must speak. She must make noise:

“It is rude to finish other people’s sentences.
I have been warned
But my ribcage keeps expanding
This hoarder rummaging through…”

Here, although the speaker has been “warned,” (i.e. shamed) she must look history in the eye. The stories within are full and need to be told: “my ribcage keeps expanding/This hoarder rummaging through…” It is here, where the heart is located, that one must undo the boxes of memory. Silent Anatomies opens each box slowly and carefully. And while such memories seem unique to Ong, she ask us to rummage through our own complicated silences.

Jane Wong is the author of Overpour (Action Books, 2016). Her poems have appeared in places such as Best American Poetry 2015, Best New Poets 2012, Pleiades, Hayden's Ferry Review, The Volta, and others. She is a Kundiman fellow and has received fellowships and scholarships from the U.S. Fulbright Program, the Bread Loaf Writers' Conference, Squaw Valley, and the Fine Arts Work Center. She is currently a PIP Teaching Fellow at UW Bothell.