Cambodia—synonymous with paradoxical ideas: ‘Pearl of the East,’ ‘war,’ ‘Kingdom of Wonder,’ ‘genocide,’ and ‘Land of Smiles’—where deep and irrevocable truths hide behind such broad and overused concepts, standing in the way of reconciliation for a people who are struggling to come to terms with the past and find a way to rebuild, restore, and live again.

As any avid student of history and war, I was familiar with the untidy landscape of Cambodian history. Democratic Kampuchea was one of the worst human tragedies of the 20th century. The Khmer Rouge regime claimed nearly 2 million lives, leaving tens of thousands of widows, orphans, and broken families. Millions of mines were laid by both the Khmer Rouge and government forces, which have led to thousands more deaths and disabilities since the 1980s.

When I arrived in Phnom Penh for the first time, I couldn’t help but be innocently captivated by the superficial energy of this developing and bustling place. Kindness and humanity from strangers I could barely communicate with drew me in instantly, making me feel at home in a place that would prove to be further away than I initially thought.

I wanted to create a documentary series based on portraiture for as long as I could remember, but the idea of documenting the lives of Cambodians did not arise until my visit to Tuol Sleng. Tuol Sleng is a museum that bears testament to the Cambodian genocide, sitting in the untarnished grounds of S21, the most notorious prison and mass extermination site of the Khmer Rouge regime.

Endless photographs taken by Khmer Rouge officials of every innocent Cambodian captured and sent to S21 cover the chilling walls of what 30 years ago were cells, interrogation and torture rooms. During the regime, the Khmer Rouge had a calculated and systematic way of categorizing and keeping records of their actions, including its victims. As I walked from room to room, each portrait, shot exactly in exactly the same manner, standing in infinite rows next to one another, stared right at me. Eyes revealed fear, despair, sorrow, confusion, and stoicism, all silently screaming, a mute cry for emancipation which still resounds in me today.

In the courtyard of Tuol Sleng, I met Chum Mey, a man with a gentle voice and piercing blue eyes. As I spoke with him, I came to learn that he is one of the 12 survivors of S21, one of the three survivors alive today. Chum Mey was the first person I photographed who is part of this series, however, when I took his portrait, I still hadn’t conceived the idea that would later evolve into this body of work. Once the conception of this series took place, I eventually went back to meet with Chum Mey time and again, photographing him each time.

This day was a turning point for me. From this moment on, I could not stop thinking about the war, the perpetrators, the victims, the survivors, and present day Cambodia as it unfolded right before me. I had arrived in Cambodia with what I thought was a very clear understanding of what the situation was, with an almost righteousness about it all, but as I let that wash away, I started to realize that it wasn’t so simple. Although the Khmer Rouge regime ended 30 years ago, there have been no sound efforts of reconciliation, and its legacy continues to affect Cambodia today.

Talking about the Khmer Rouge has been widely taboo in Cambodia since the end of the war. It can be accepted that Cambodia only learned to breathe again at the expense of silence and the will to forget, which has in turn had detrimental effects on the rebuilding of its society in the aftermath of war. Physical and mental disability is a prominent symbol of the legacy of war in Cambodia. Those who visibly bear the wounds of war have become an unintentional reminder of the country’s unbearable past, and are amongst the most vulnerable and marginalized groups in Cambodia. Visible disabilities have become a social stigma synonymous with exclusion on all levels of society and in daily life. Furthermore, I realized that victims of the Khmer Rouge do not only exist within the confines of the past, nor places like S21 or the Killing Fields. Everyone in Cambodia, those of yesterday and today, dead or alive, is a victim of the war and its wounds.

That night I couldn’t sleep, I was haunted by the blood-stained white and maroon tiles of S21, silent cries and spirits trapped in the eyes of hundreds of photographs inhabiting the horrific place. I kept thinking of the way photography was used by the Khmer Rouge, as a system of “cataloging” its victims, and the way these very photographs have come to represent the legacy of the war today. Then I would think of Chum Mey, a survivor, and look at the photograph I had of him. Could there be a way to explore the legacy of war in Cambodia from an angle that would not make people want to look away? A way to appease memory with reconciliation, instead of pain and the will to forget?

I began building on this idea and found myself unconsciously working towards it. I spent time researching at DC-CAM (Documentation Center of Cambodia), trying to find native sources that would give me a more faithful understanding of the legacy of war in Cambodia. Through many unorganized stacks of books, articles, and studies, I found “The Cambodia(n) People’s Lament,” a poem by Sath Bunrith. This was my first encounter with an openhearted testimony about the legacy of war, a beautiful and visual encounter that inspired me to look for more native poetry. What I came to find were strong Cambodian voices bearing witness to the legacy of war, calling out to fellow survivors through a shared grief and the recognition of human suffering, but most importantly, letting them know they are not alone. I found an unusual beauty in including this element in my work, which serves, in its own right, as a way to preserve the cultural literary tradition that was at risk of disappearing during the Khmer Rouge regime.

I also started thinking about photography, its origins and place in society. When photography was “invented,” it was mainly used as a form of cataloging the world around us in the most mundane manner, but as it was perfected and its popularity grew, having one’s portrait taken became an act of status amongst the aristocracy and high spheres of society. Photography became a way to establish not only one’s identity, but also one’s place within society itself. Looking at such images gave me insight into how I could use this photographic style to offer a different conversation about the war, its wounds, and its legacy, pointing towards a more humane dimension of such subjects and living individuals.

Through my time in Cambodia—learning Khmer and building relationships with people—I learned that assumptions and perceptions are dangerous, as they do not answer to the complexities of an individual’s plight. As I gained insight of what the war and genocide truly meant to the community, I realized it went far deeper and was endlessly more intricate than the impersonal historical truths I had come to learn within the confines of a classroom.

Working from a conviction that a portrait is, as far as possible, an act of mutual engagement, I made a commitment to the people I approached, gaining their trust and slowly finding my way in to their lives. It was especially important for me to show that physical wounds of war only represent a facet of an individual’s identity, strength, and willingness to live, without neglecting their struggle. Most of the images comprising this work have been taken in an eventful manner, with the help and input of the subject themselves, its their family, friends, and neighbors. By using this approach and inviting the community to take part, the photographs have not only come to show a faithful representation of the subjects as they wish to be identified, but have also opened avenues for dialogue on the subject of the legacy of war and social inclusion within the community.

Through developments in justice and education, the process of reconciliation in Cambodia has recently begun to solidify, and with it come the endless possibilities of rebuilding. This body of work is an attempt to define Cambodia’s past in terms that are acceptable for its victims and future generations, through the eyes of those who are striving to rebuild their communities and identities in the aftermath of war. Cambodia is filled with untold stories of overcoming that bear testament to the willingness and efforts of a society to reconcile itself. An open-ended multidisciplinary essay, “The Legacy of Silence” seeks to foster social reintegration, coexistence, and ultimately to contribute to the dialogue of reconciliation in Cambodia. 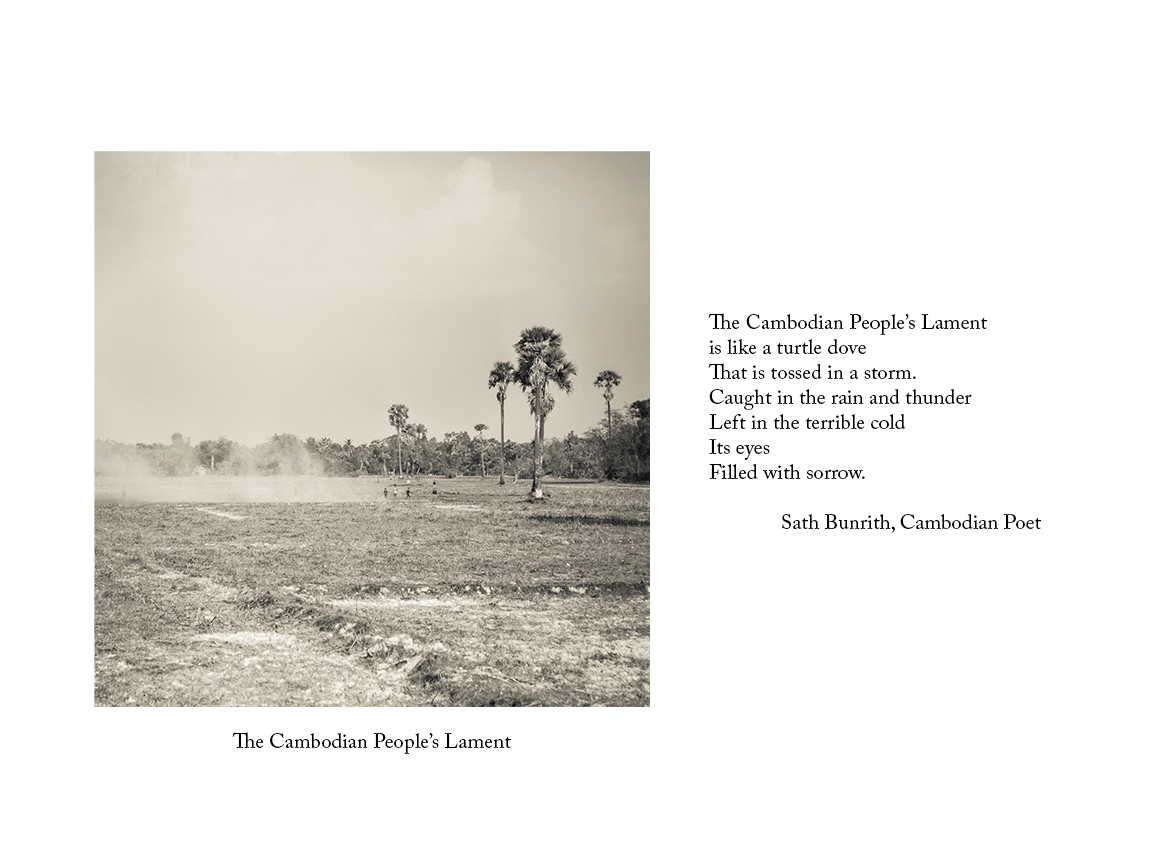 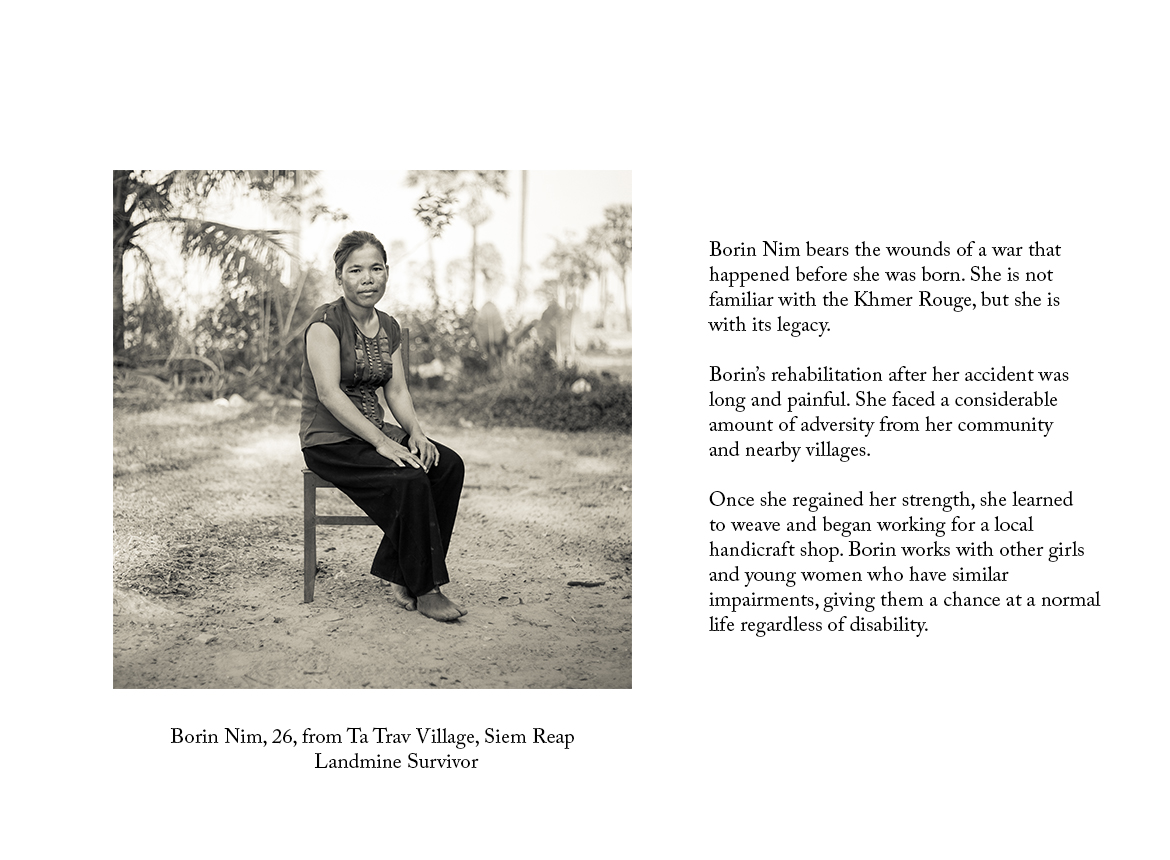 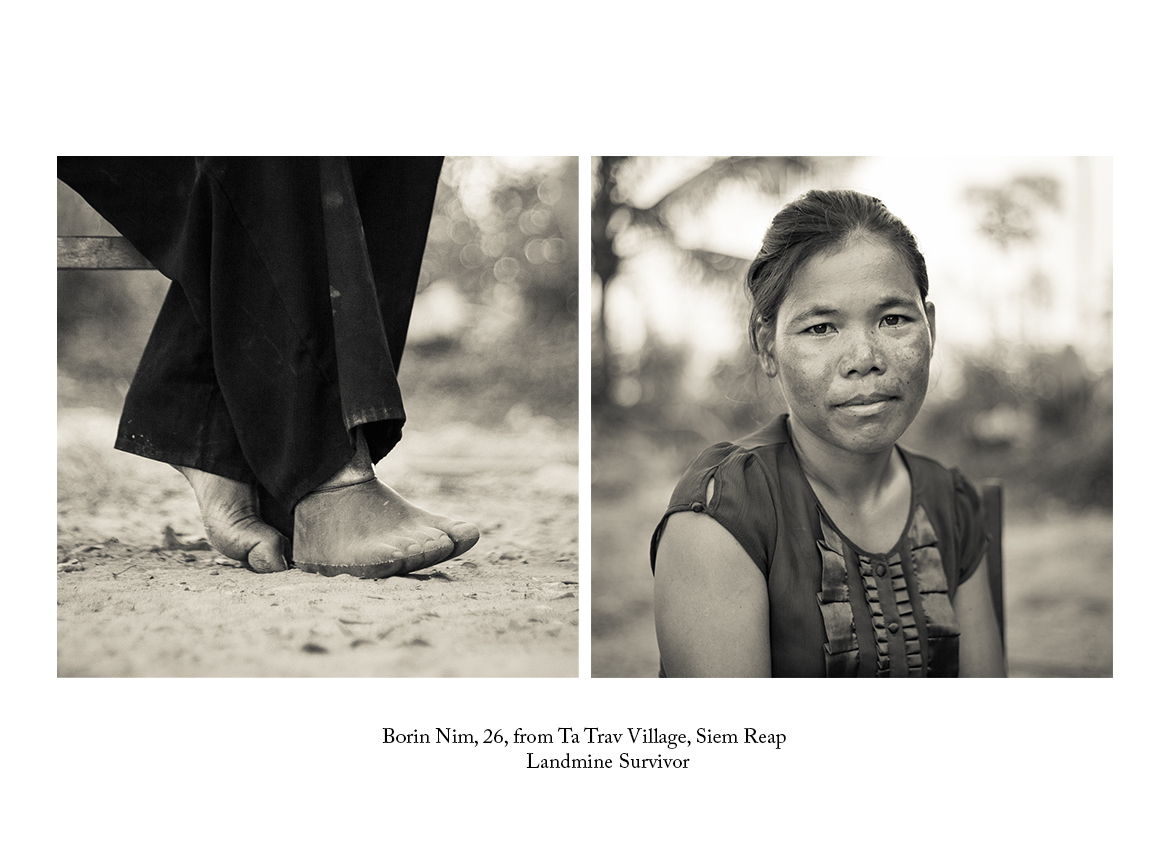 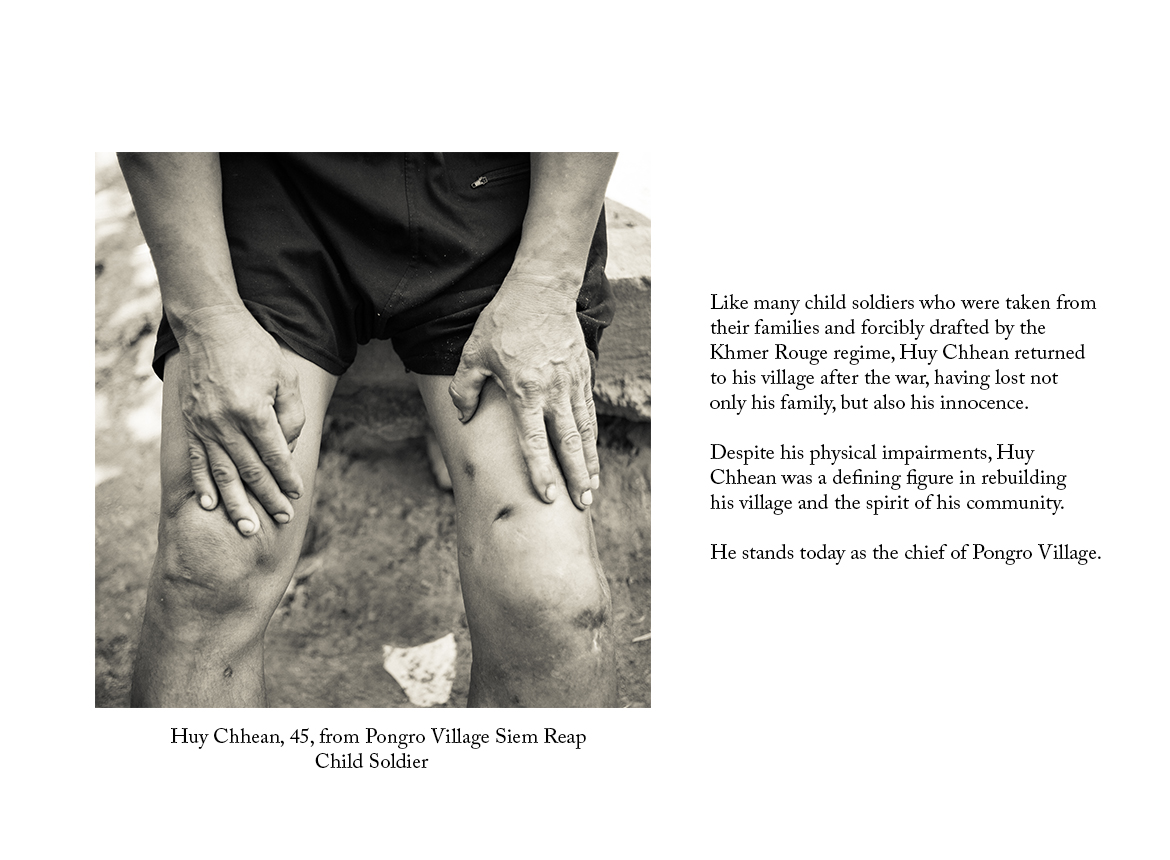 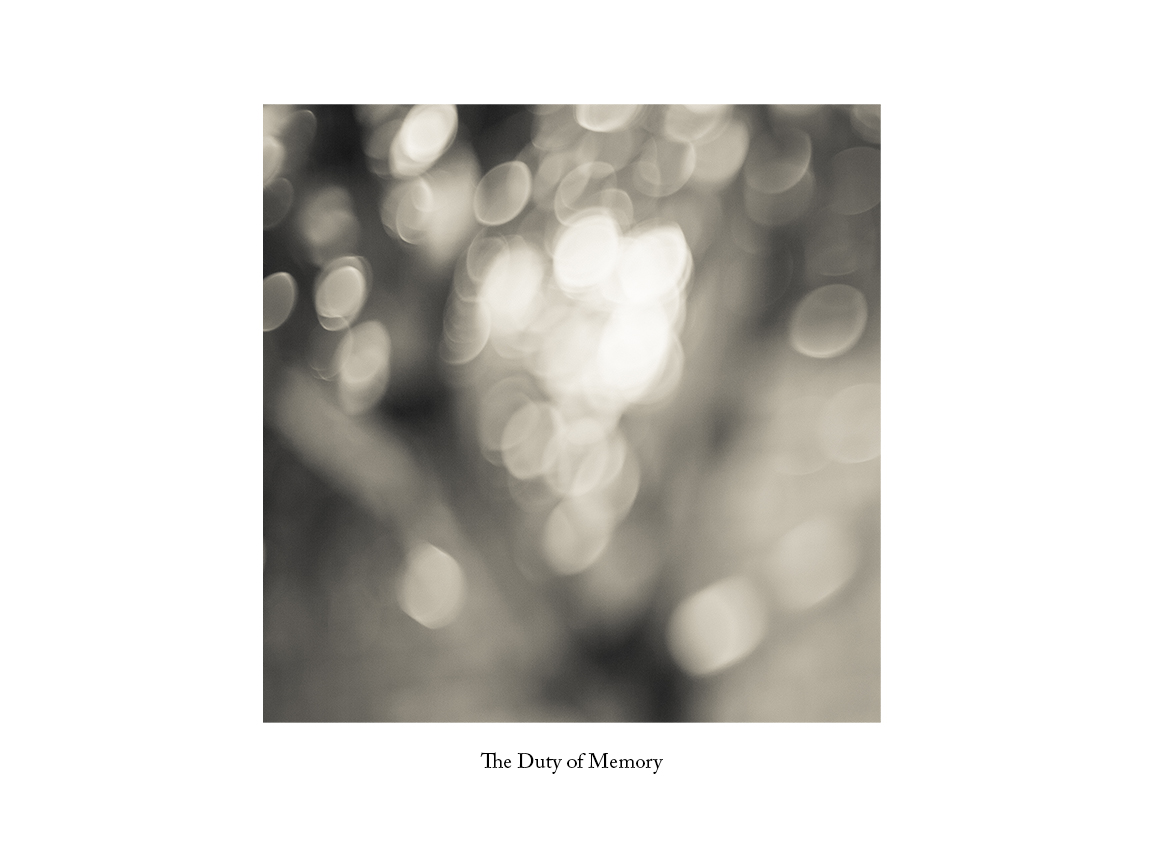 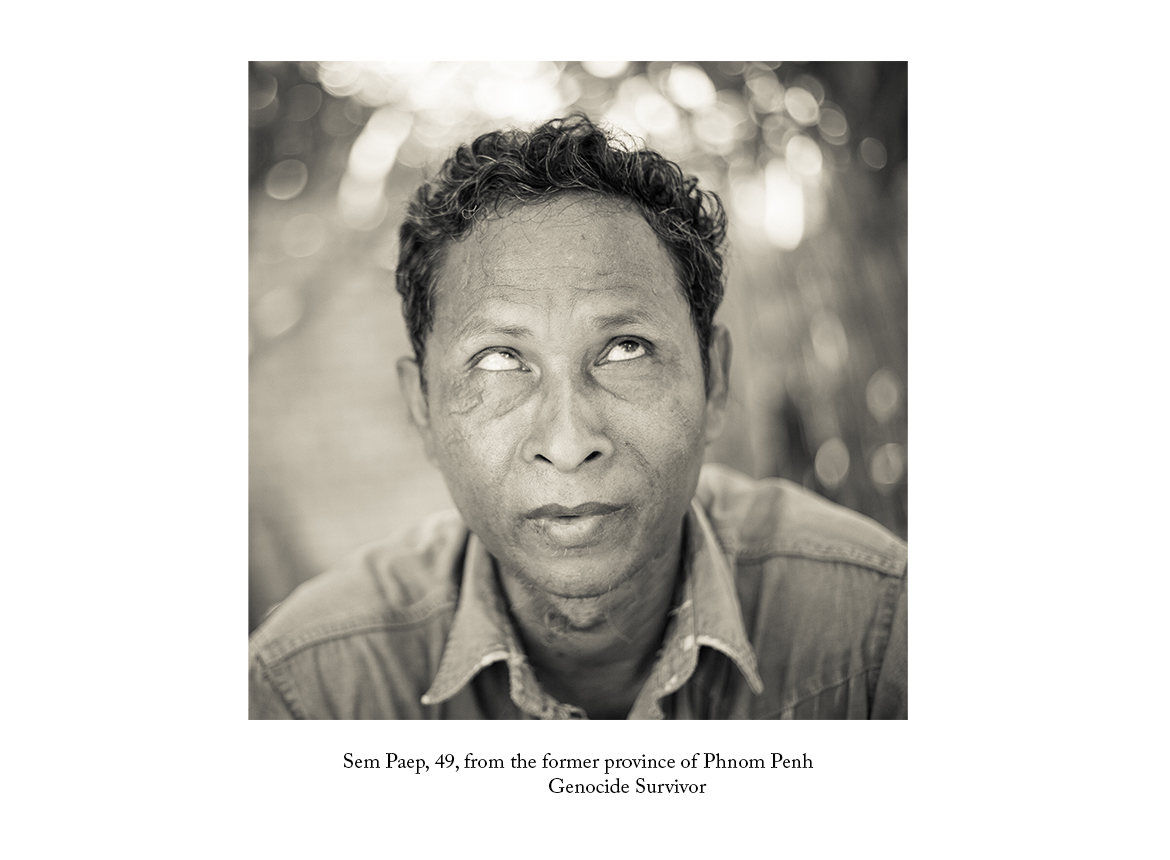 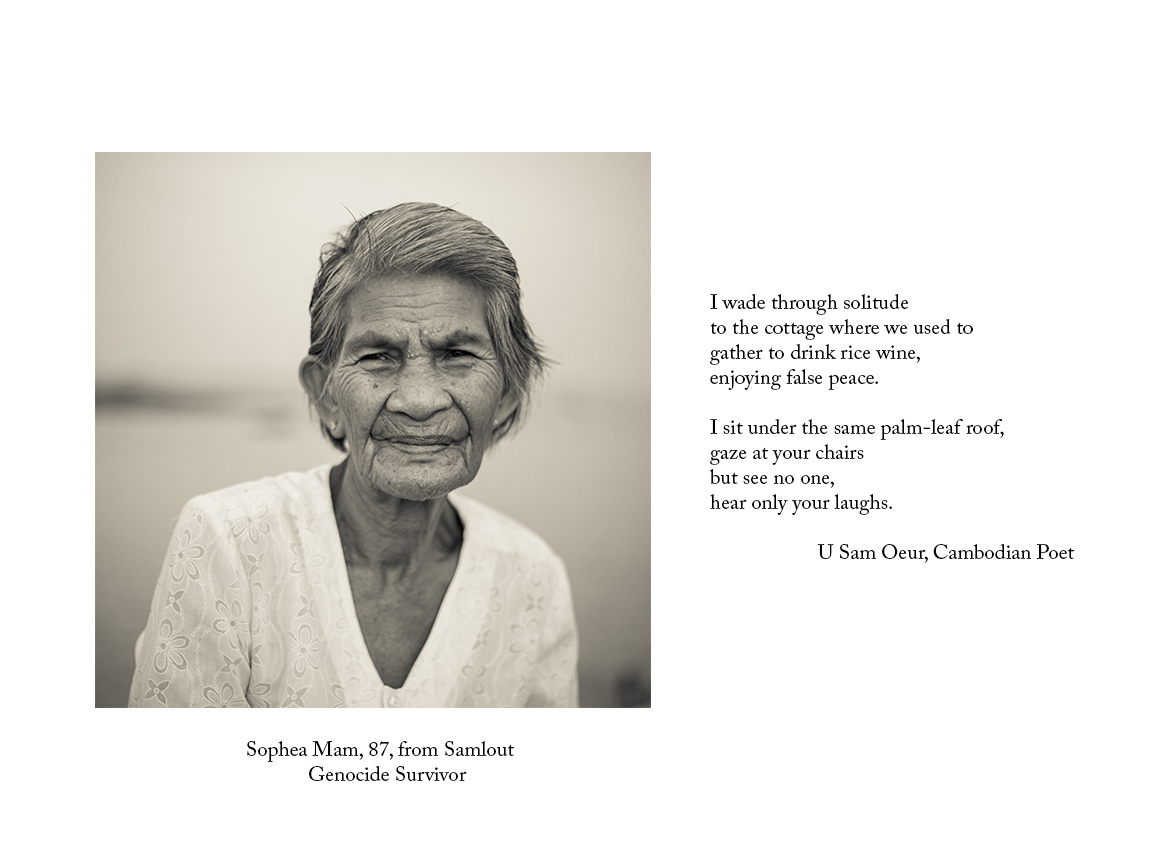 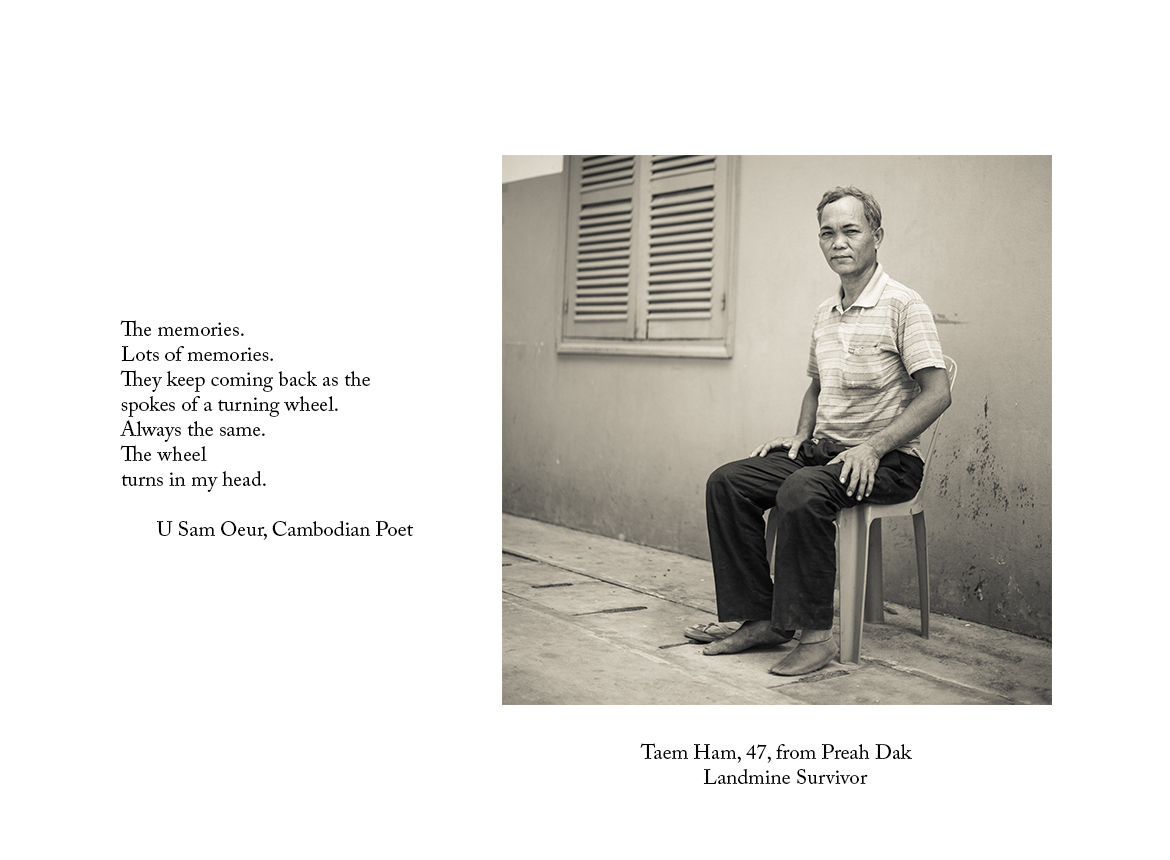 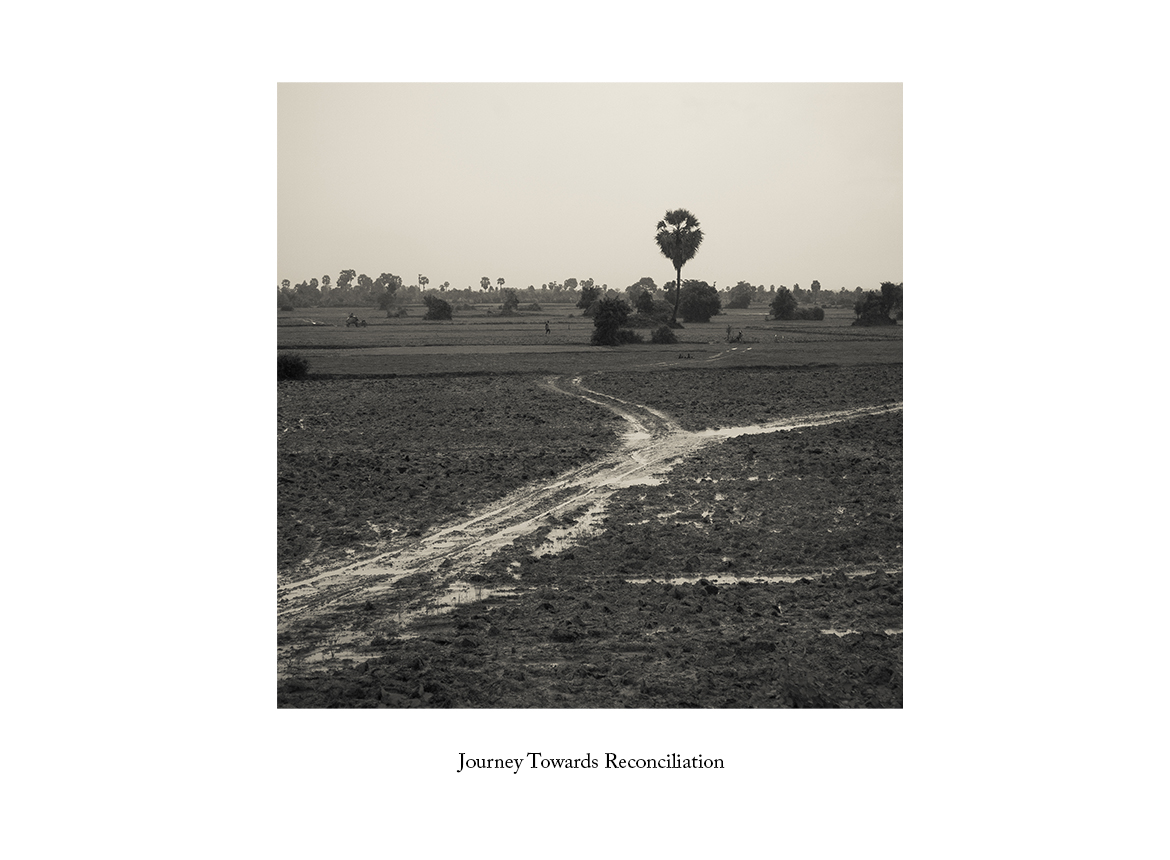 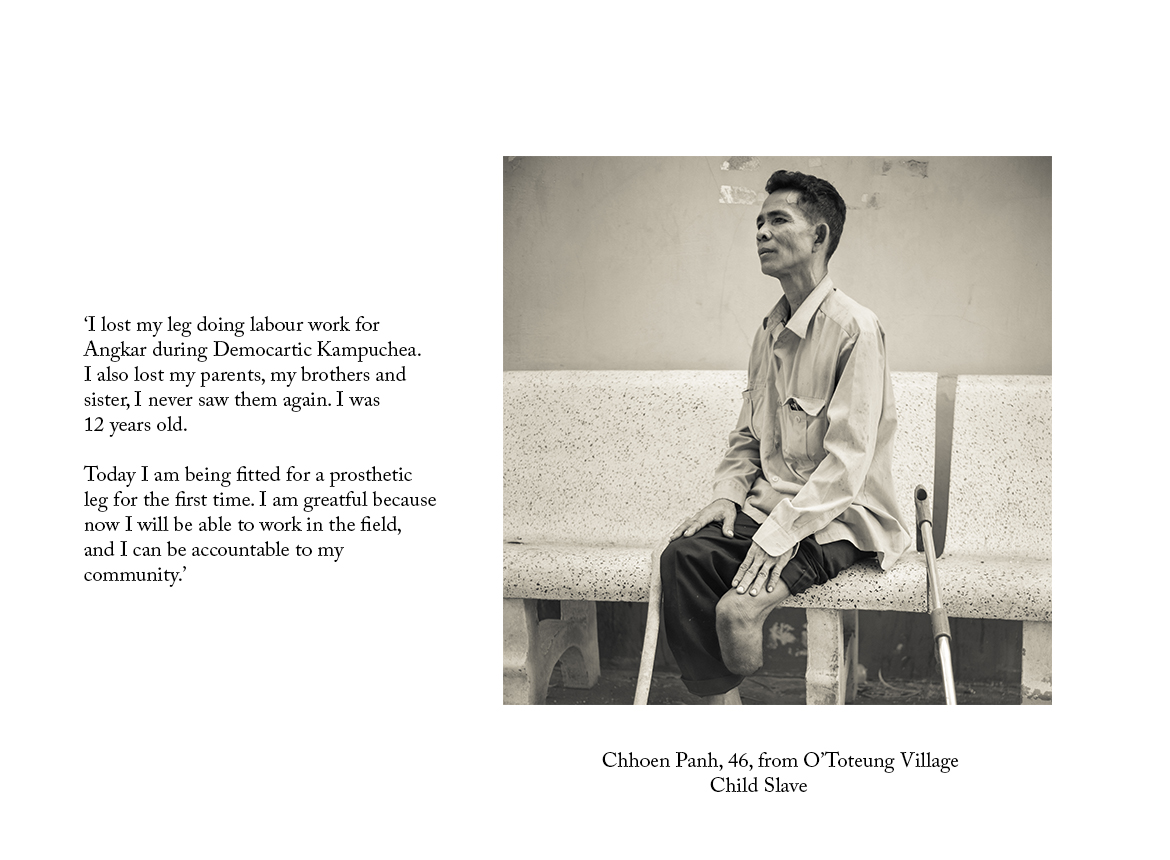 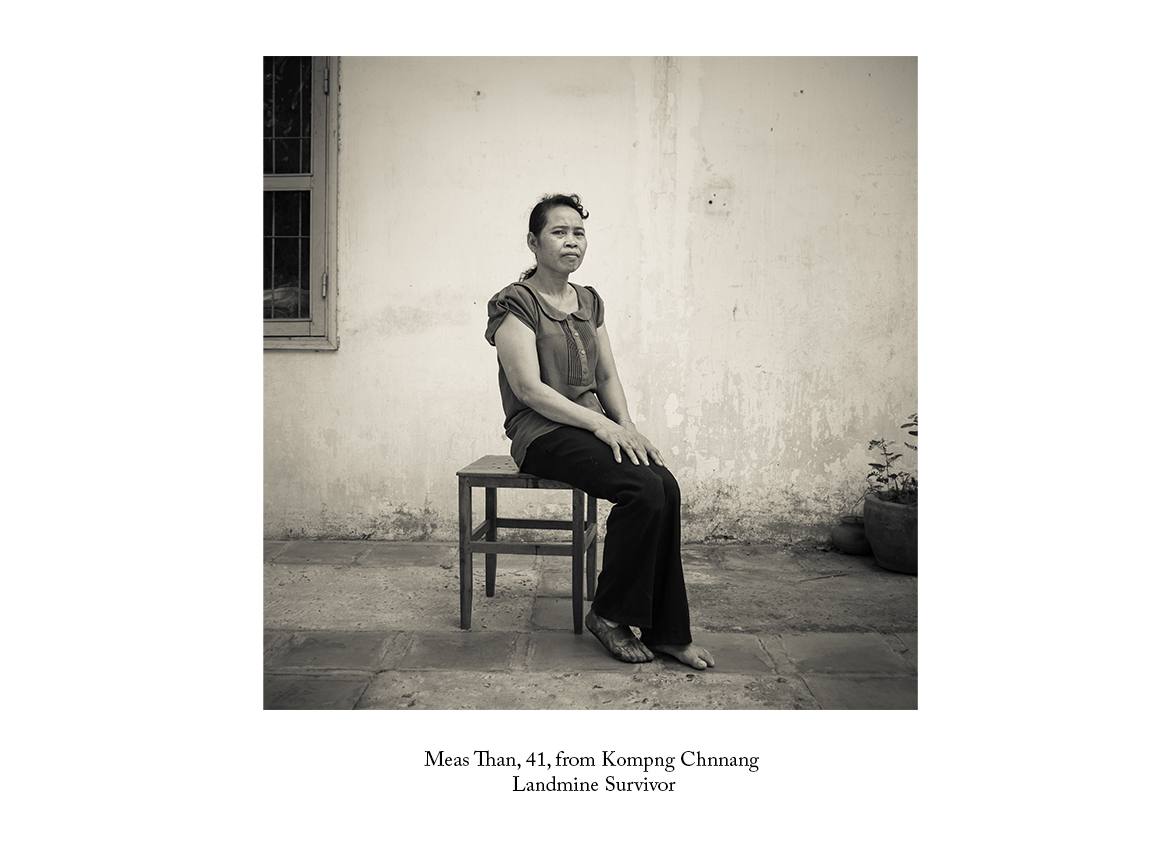 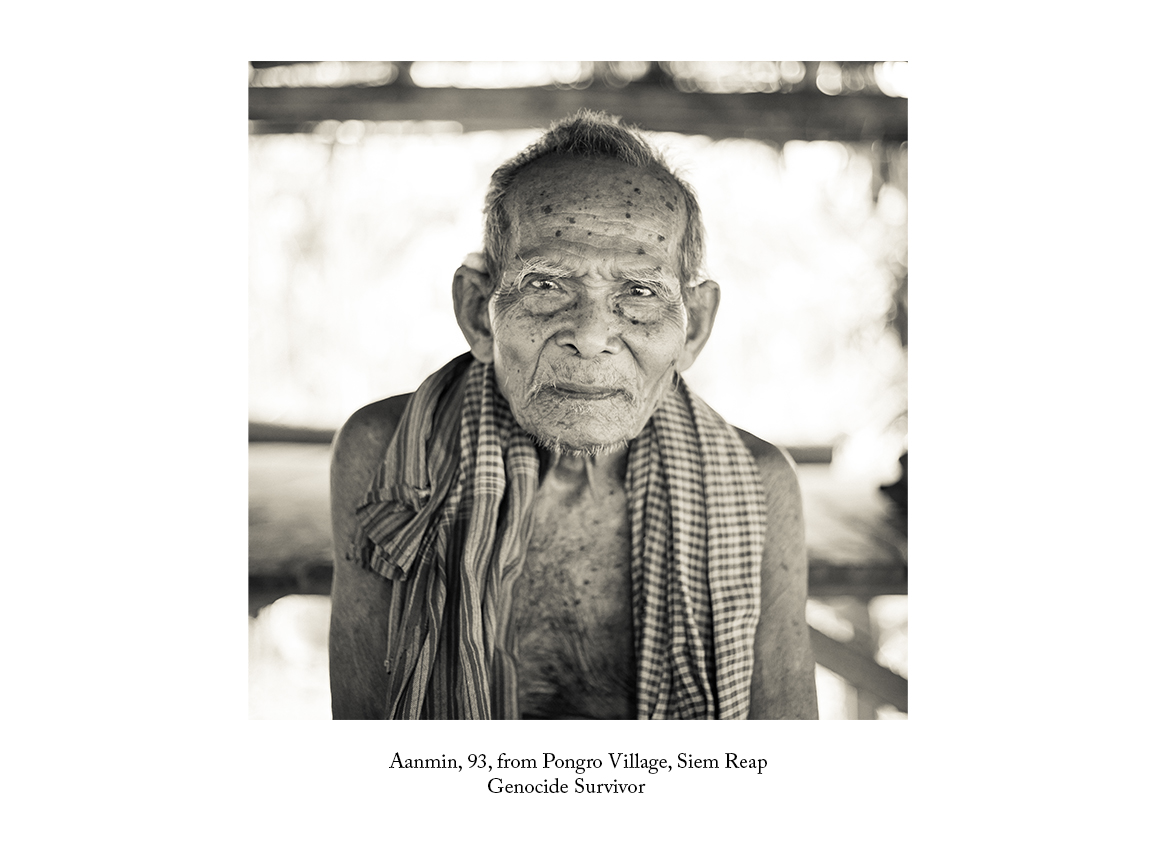 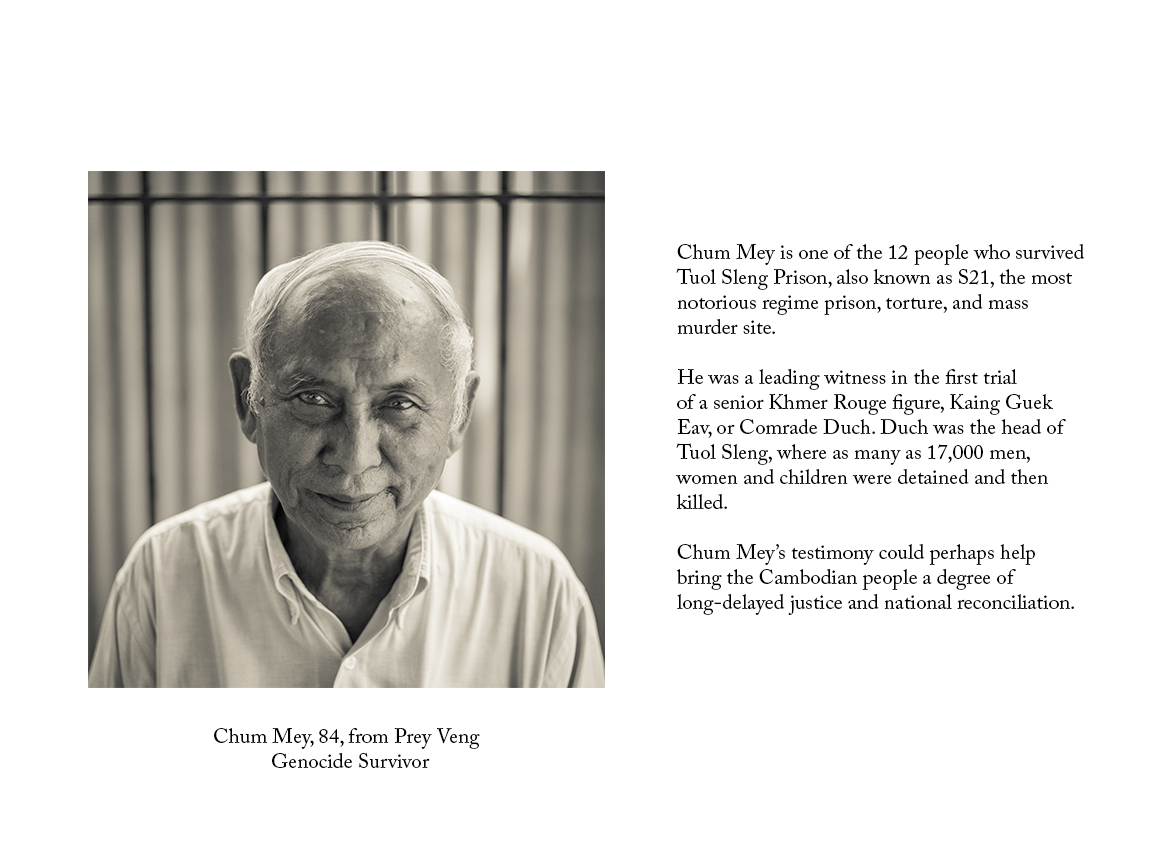 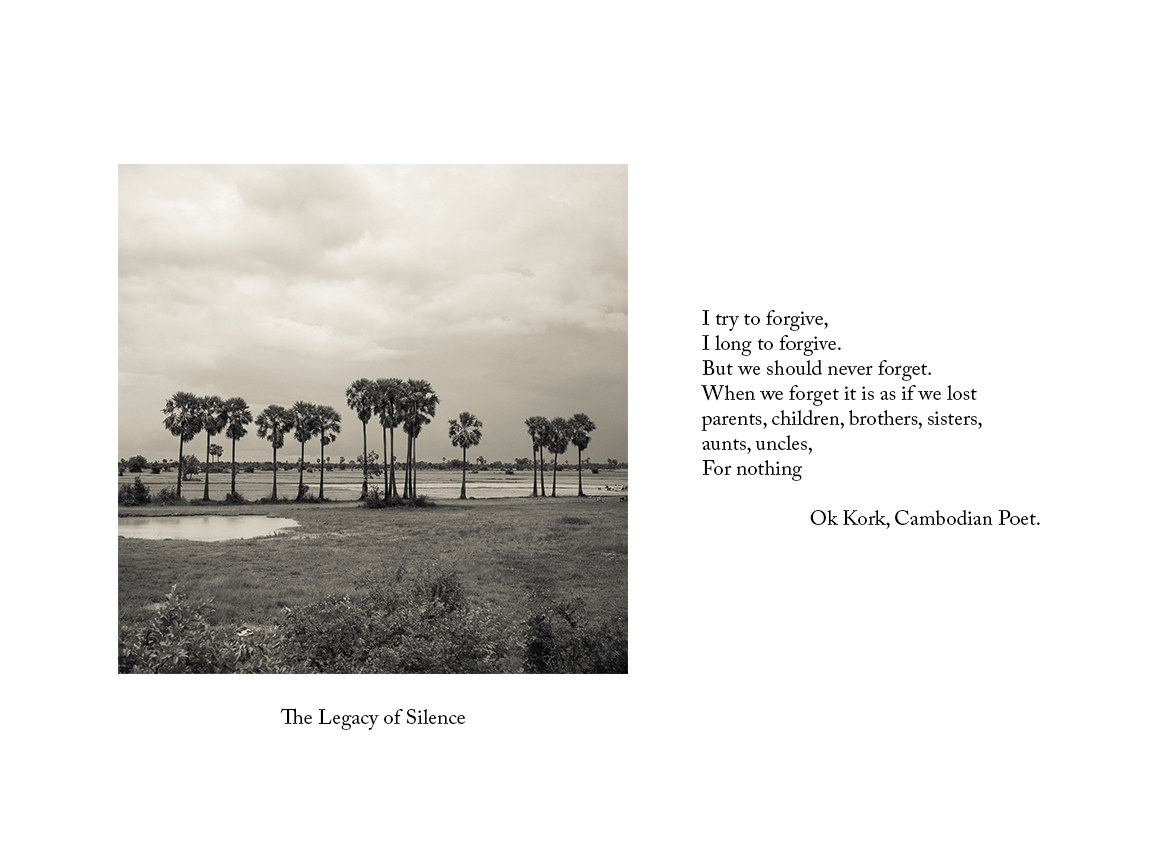 Marta Tucci is a freelance documentary photographer and writer. Her work focuses on developing long-term projects that explore issues of identity and social exclusion, paying close attention to the plight of displaced and marginalized communities in the aftermath of war.

Opinion by Laura Kasinof
Yemen's Change Square, Ten Years On
blog by Warscapes
Ethiopia: Urgent Call and Appeal for Peace
Reviews by Sneha Khaund
The Personal is Political in Assam's Insurgency
column by Esther A. Armah
BEWARE! Statementism and Tweak-o-nomics
Conversations by Nathan Suhr-Sytsma
What binds us, in this boat: Poet ‘Gbenga Adeoba on migration
Literature by Kevin Mwachiro
Once Upon a Night
Poetry by Ngũgĩ wa Thiong’o
Dawn of Darkness
blog by Warscapes
Open Call: The Corona Notebooks
Poetry by Susan Nalugwa Kiguli
To War Mongers Everywhere
Opinion by Jehan Bseiso
Skyping with Medics in Syria
Like any of the articles? Support our work.
Donate Now