Sitor Situmorang graced the Indonesian cultural political terrains in more ways than one. Born in 1924 in Harianboho village, west of the Sumatra’s Toba Lake, Situmorang began his career as a reporter. In 1941, during the period of Dutch colonization, he moved to the capital city, then-called Batavia, and became known as a prominent intellectual and literary figure in Indonesian modern literature, publishing hundreds of poems, short stories, and essays.

During the first few decades of Indonesia’s independence, he was known as a nationalist, political activist, and strong advocate for Marhaenism; an Indonesian concoction of socialism and nationalism. The first president, Sukarno, experimented with various governence and economic models. Western nations became wary when Indonesia became one of the leaders for the anti-imperialist coalition of the Asian African nations and held the Bandung Conference. Furthermore, Sukarno’s relationship with China and the vast growth of Indonesian Communist Party had stirred US fears that Indonesia might join the communist bloc. Situmorang was a cultural activist during Sukarno’s time and was sent to various cultural missions abroad. Sukarno’s fall in 1967 made way for Suharto, a Washington-backed president who implemented capitalist, militaristic democracy for the next 32 years. Situmorang was incarcerated when Suharto rose to power and was only released eight years later.

The short story "Oceans of Longing" reveals a side of Situmorang often overlooked by scholars; that is, politics aside, he was first and foremost a writer who spoke assertively about his nation and homeland. He was a rare voice who spoke intimately about the Sumatran landscape and Bataknese culture, presenting images of Sumatra’s Toba Lake when Indonesian literature was dominated by writers from the Java island. Situmorang’s work has not been widely known by non-Indonesians. His poems was published in English in 1992 by Lontar Foundation under the title To love, to wonder but was not widely known. This time, Indonesian studies scholars Harry Aveling, Keith Foulcher, and Brian Russell Roberts have taken on the task of translating Situmorang’s short stories and shed light on his craft and engagement with world culture to English readers. 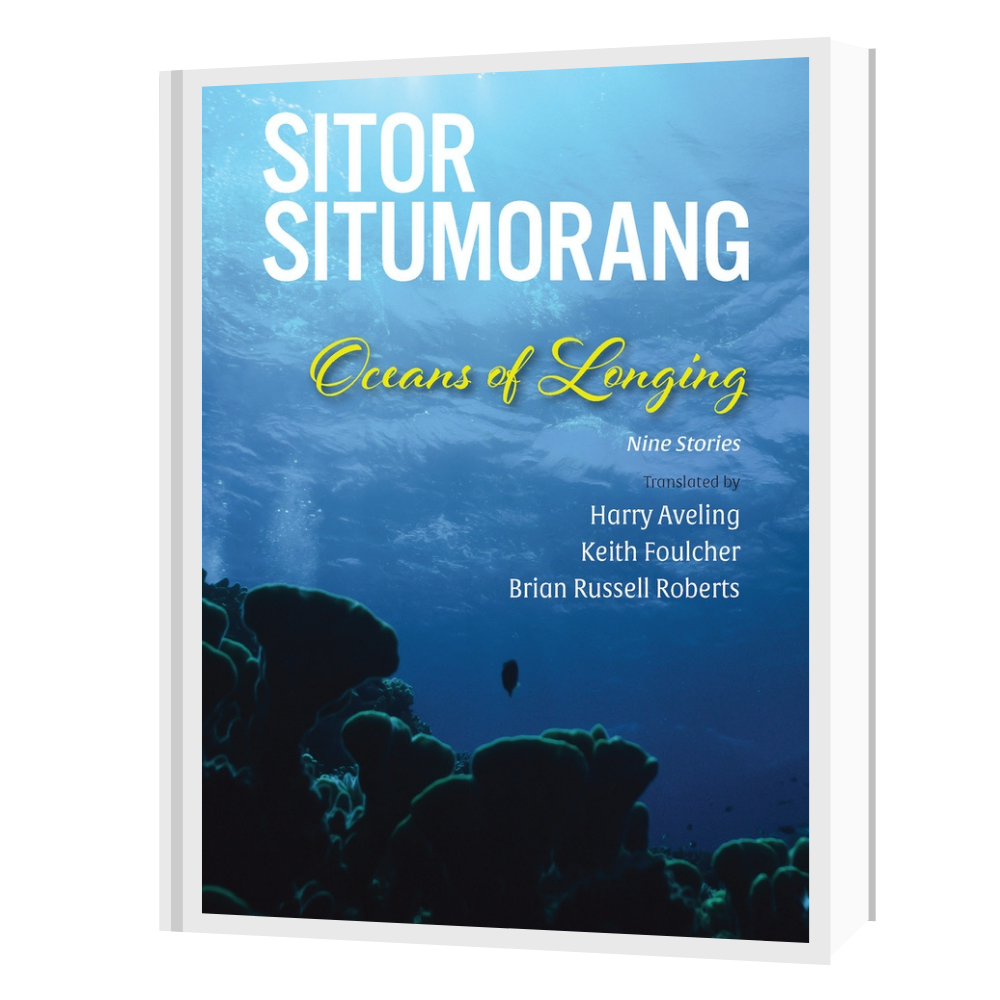 Oceans of Longing: Nine Stories covers three important periods of Situmorang’s life as a writer. Some of the stories are taken from the book Pertempuran dan Saldju di Paris (the title originates from two stories in the collection, “Combat” and “Snow in Paris”) which was published in 1956. This was shortly after he returned from his sojourn to Europe under the support of STICUSA (Stitchting vor Cultuur Samenwerking), a cultural foundation established by the Dutch and Indonesian governments. Other stories in Oceans of Longing were published over a decade later in two different books: the anthology Pangeran: Kumpulan Tjerita Pendek (Lord: A Collection of short stories, 1963) was published a few years before Sukarno’s descent from power, and Danau Toba: Sekumpulan Cerita Pendek (Lake Toba: A collection of short stories, 1981) that marked a time in his career when he turned to writing about the Bataknese culture and tradition.

Broadly described, Oceans of Longing represents different times in Situmorang’s life. One half of the book reflects Sitor’s worldy travels with stories set in Netherland’s Red District, a small apartment building in Paris, and a cross-continental train heading for Amsterdam. Critics have opined that Situmorang’s Europe-based narratives were highly influenced by European modernism and French existentialism. Through narrators such as a young diplomat and an Indonesian artist in a western country, Situmorang was critical to both his own people as well as the European society he observed. The narrators detest upper class Indonesians whose privilege allows them to travel while simultaneously contemplate the amalgam of characters from all corners of Europe with whom he crossed paths.

Situmorang is known to have been influenced by European existentialism some of which is reflected in his dramatic narration and depiction of the banality of everyday life. In the story “Snow in Paris”, the narrator contemplates as he stares his room: “The room was tidy, the air warm and moist. It was empty of all signs of humanity except for the traces of everyday boredom. Cleaned, slept in, cleaned, slept in. The room never spoke, never asked questions, and never answered any.” Upon his return from Europe, he continued to blaze the literary scene as a cultural activist, essayist, poet, and literary critic.

Meanwhile, the other half of this book displays a more demurred Sitor, comfortably rooted in local culture and engaged in narrating Lake Toba. These stories are perfect depiction of his craft as a Penyair Danau Toba or ‘The Toba Lake Poet’ -- a moniker he used for himself in an autobiography he wrote in 1981. Oceans of Longing begins with his arguably sharpest oeuvre, a short story titled “Old Tiger” which has been repeatedly adapted into a play by theater groups in Indonesia. The story centers on a son who had left his village to work in the city, and is now summoned home by his father. On his way home, an old man greets him and asks him to spend a night in on a chilly hill just off Lake Toba before continuing the journey home the next morning. The young man bears witness to the old man’s obsession over an old tiger after the tiger has bitten his hand some years ago. The eerie description of the Sumatran wilderness and the image of an old tiger that is mystical, vicious yet worn-out all loom over the narrator like a dark cloud in his first night back to the hometown he thought he knew. The result is a quick-witted story about mystery and loss, with the Lake Toba’s landscape serving as an important symbol.

The theme of returning to the hometown and the character of a dutiful son are common patterns in this collection, and they speak true to the values and tradition of many Indonesians. Urbanization is part of the norm as many Indonesians choose to relocate to the cities rather than stay in rural hometowns. Specific to the Bataknese culture with which Situmorang was raised, sons and daughters who have left home for opportunities elsewhere are forever bound to their hometown, and must submit when summon home for weddings and funerals. Furthermore, the annual act of coming home is a national tradition, done during religious holidays. Kinship and family are also significant for the Bataknese, and we see this depicted in the stories when the whole village serve as prongs and means to help sons of other families reached home to their parents.

Stories about reconnecting with parents and siblings who were left behind are also prominent in the book exemplified by the stories “Mother Goes to Heaven” and “The Last Supper.” Here, Situmorang seems to long for the homeland and struggles to capture what is left of it. He describes the constant act of returning home as a path that repeatedly finds a gapping void, grief, and loss, juxtaposed against the close-knit community that carries on familial and communal traditions. A telling scene is depicted in “Mother Goes to Heaven“ when the newly returned son finds his mother has passed away minutes before opening their door for neighbors to congregate for mass at their home. The son decides to pretend that the mother is asleep, not wanting to create a stir. The image of the lifeless mother amidst the neighbors’ lively prayers though odd and triggering serves to illuminate an Indonesian context where it is important to keep the honor of the family’s name, and prioritize community over individual needs and emotions.

In translating Situmorang's Oceans of Longing, Harry Aveling, Keith Foulcher, and Brian Russell Roberts’s expertise in Indonesian literature and literary history really shines. The English version captures his interest in European existentialism and anxieties upon observing how the world is so enmeshed. Simultaneously, Situmorang’s intimate depiction of Lake Toba is beautifully unraveled to the English readers. A line from “Old Tiger” transfers readers to the Toba hillside, “He stoked the fire by scratching the coals with a dry branch. Cold air blew into the hut through the sieve of dry grass walls.” To that end, Oceans of Longing skillfully connects the multiple geographies that Sitor Situmorang had traversed and ultimately delivers his work across yet another boundary, that is, unraveling his stories to non-Indonesian readers.

Warscapes had curated a special issue on Indonesia in collaboration with The Lontar Foundation in 2012.  See here: http://www.warscapes.com/retrospectives/indonesia

Asri Saraswati is an Assistant Professor in the English Studies Program and the American Studies Postgraduate Program, University of Indonesia. Her research is broadly concerned with Indonesian diaspora, postcolonialism, and global English literature. She is currently  researching the cultural politics of travel and Indonesian sojourn writers who had spent time in the U.S.

Reviews by Sneha Khaund
The Personal is Political in Assam's Insurgency
blog by Warscapes
African Authors Sans Frontieres in Solidarity with African-Americans
Conversations by Nathan Suhr-Sytsma
What binds us, in this boat: Poet ‘Gbenga Adeoba on migration
Opinion by Anne Bourrel
No, I won't write about corona
Poetry by Ngũgĩ wa Thiong’o
Dawn of Darkness
Reviews by Lutivini Majanja
Makena Maganjo chronicles 1990s Nairobi
blog by Warscapes
Open Call: The Corona Notebooks
Opinion by Christopher J. Lee
Reading Wole Soyinka’s "Madmen and Specialists" in a Time of Pandemic
videos by Warscapes Literary Salons
Nairobi: Maps of Exile
Reviews by Kerry Carnahan
Nathalie Handal: A No-State Solution in Poetry
Like any of the articles? Support our work.
Donate Now