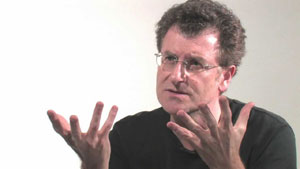 In August 1994, Chilean artist Alfredo Jaar traveled to Rwanda in the aftermath of the country’s infamous genocide. He documented scenes of murder, mass graves and refugee camps in Uganda and the DRC, which was then called Zaire. He interviewed, filmed and photographed survivors.

Jaar’s visit initiated The Rwanda Project, a six-year undertaking involving mixed-media installations responding to the spectre of genocide and the world’s collective failure to react.

Reflecting on the project, Jaar said, “I was shocked and appalled at the criminal indifference of the world community.” He continued, “It took a while to analyze and understand the information I accumulated. I felt blocked intellectually and shocked psychologically.”

The inability to encapsulate trauma led Jaar to test different ways of portraying genocide. Collectively, however, his ‘exercises’ navigated the ethics of representation and the aestheticization of suffering by defying the conventions of documentary photography. Unlike photojournalists and reporters at the time, Jaar refused to display images of victims themselves.

In Real Pictures, Jaar concealed sixty photographs taken in Rwanda inside black boxes arranged on the floor. The top of each box was inscribed with a caption describing the image within. By withholding the photographs, Jaar emphasized the impossibility of representing tragedy, while referencing the invisibility of the genocide in global media.

This emphatic absence was also referred to in (Untitled) Newsweek. Jaar exhibited the seventeen Newsweek magazine covers that coincided with the genocide in 1994, along with facts on the extent of violence in Rwanda. As reports suggested that thousands were being killed, the periodical gave prominence to stories on O.J. Simpson, Richard Nixon and Nelson Mandela.

The Eyes of Gutete Emerita consists of backlit images of Emerita’s eyes and text recounting her personal story. Gutete Emerita managed to escape with her daughter from a church where 400 Tutsis were massacred. She was attending Sunday mass with her family and witnessed Hutu militia murder her husband and two sons with machetes.

For this piece, Jaar decided to reduce the scale of the genocide to a single human story. He felt that the idea of one million dead was an abstraction that failed to address the dimensions of suffering. Relaying Emerita’s experience through her eyes, the viewer is confronted with the act of witnessing and the cost of inaction.

The Silence of Nduwayezu played with the sense of scale itself. It consisted of a light table covered with one million identical slides of Nduwayezu’s eyes, each representing a murdered individual. Viewers were invited to examine the slides with a magnifying glass. Nduwayezu was a young refugee who witnessed his parents’ murder.

For Frank Möller, Jaar’s work is an example of how “to circumvent the looking/not looking dilemma and to increase the audience’s awareness of its own responsibility….[His] artwork haunts the viewer, not because it shows images depicting brutality but because it alludes visually to brutality only by implication.”1

By withholding images of atrocity, Jaar avoided photography’s tendency to aestheticize its subjects through framing and composition. Viewers, in turn, would not be complicit in the subjects’ suffering through the consumption of those images. Instead Jaar confronted the viewer to examine the collective indifference to human suffering without, he says, “falling into the trap of what media did or did not do.”

Two decades on, the questions on representation and humanitarian intervention seem as salient as ever. Citing the current situation in Syria, Jaar laments, “The world is as wicked as it was twenty years ago. We continue to ignore conflict, with ignorance and indifference. The world hasn’t managed to do anything. I am not hopeful.”                       - By Tyler Chau 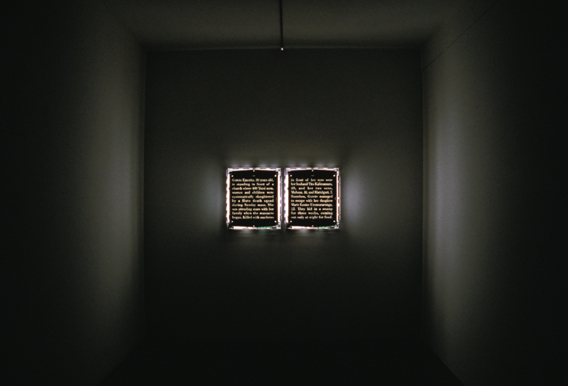 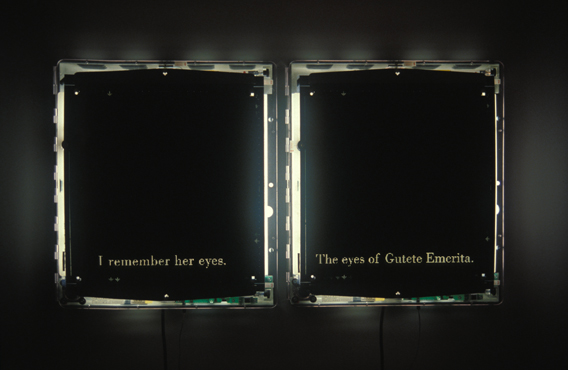 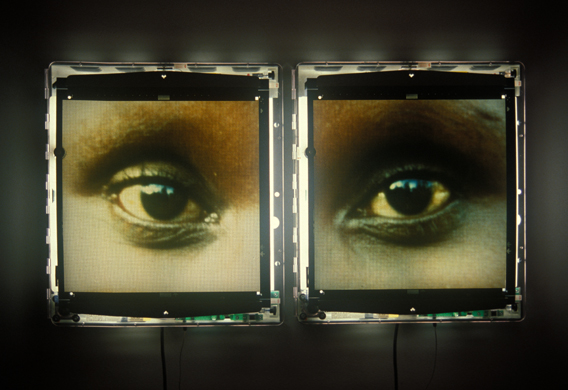 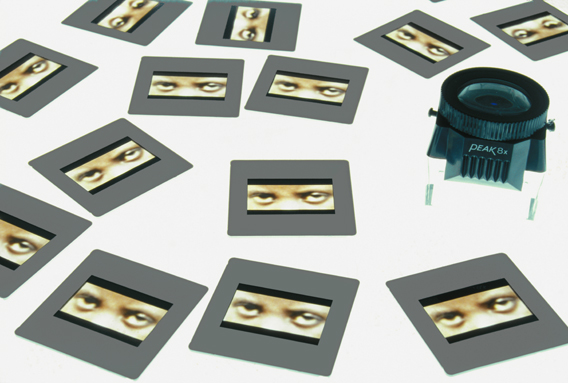 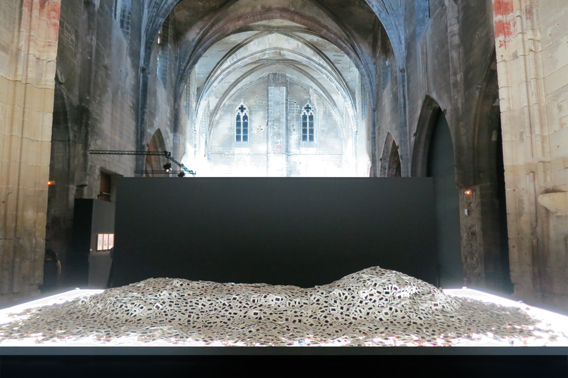 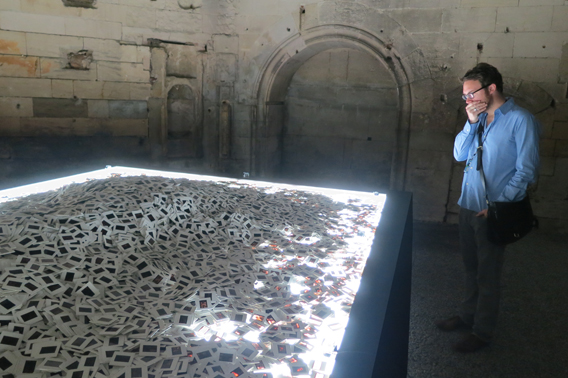 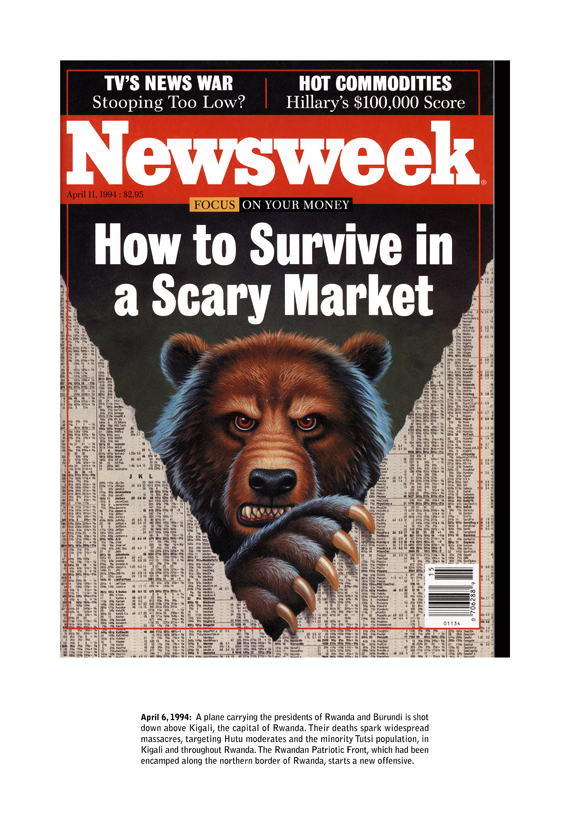 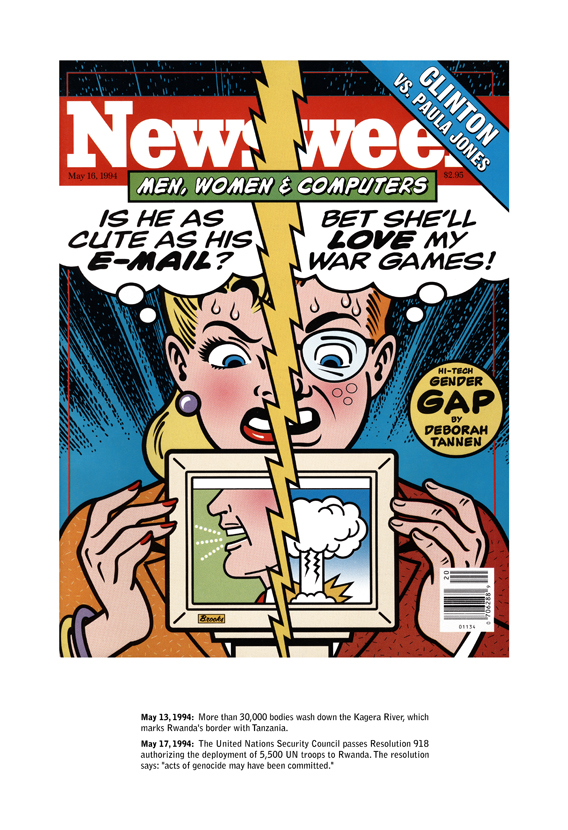 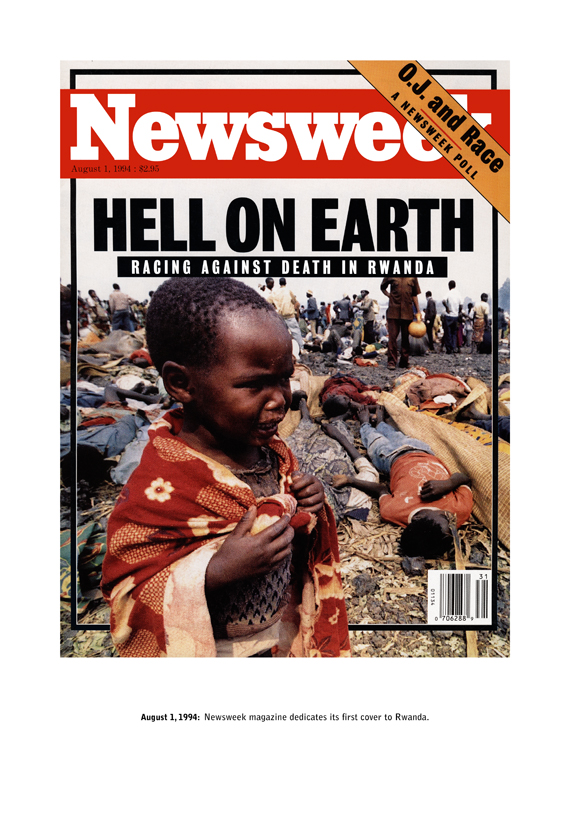 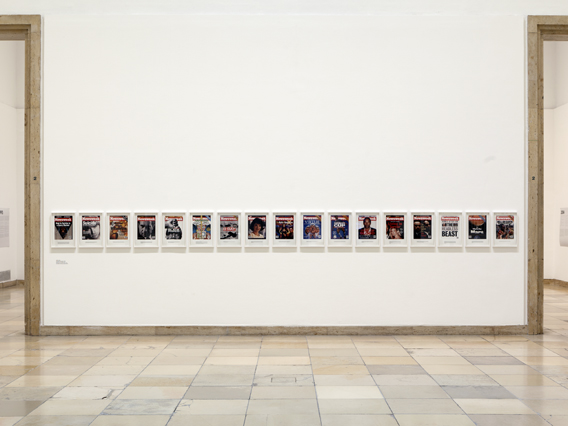 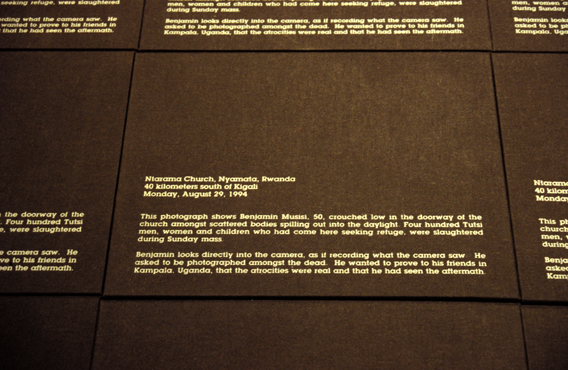 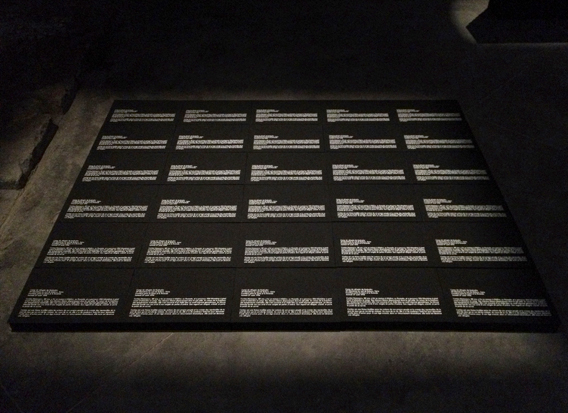 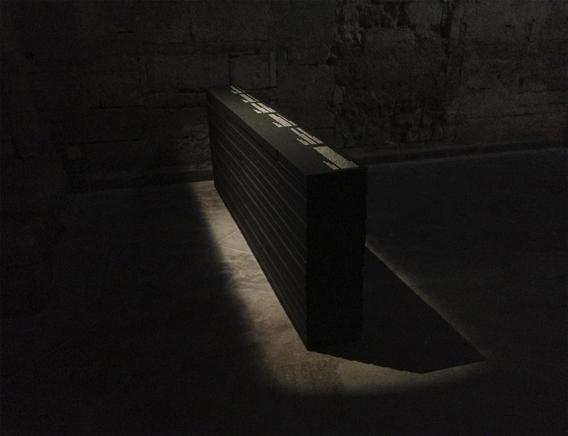 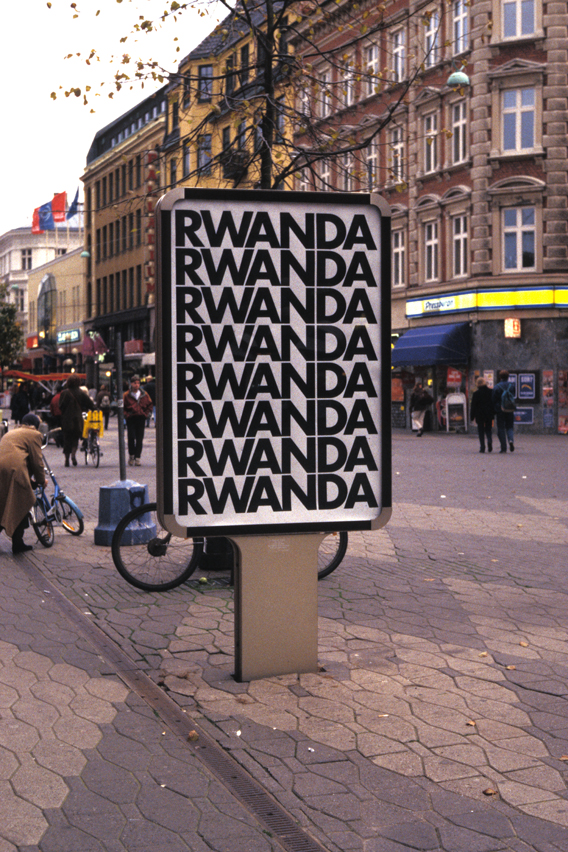 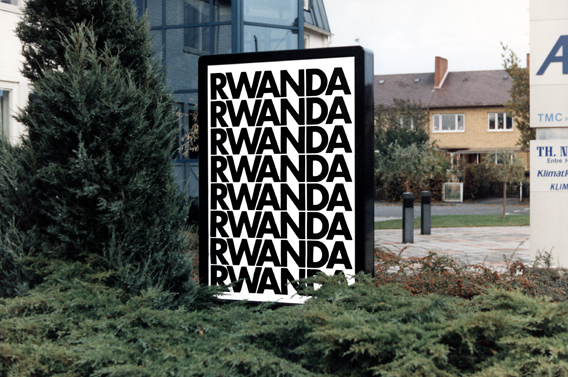 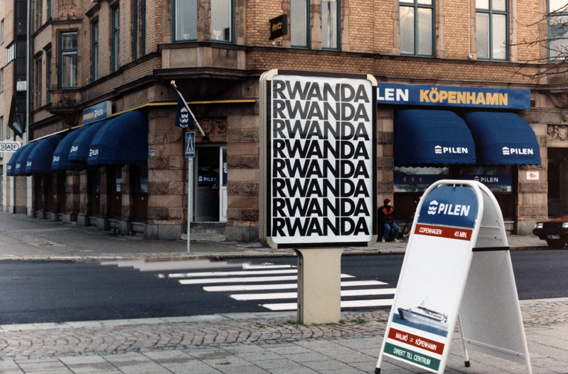 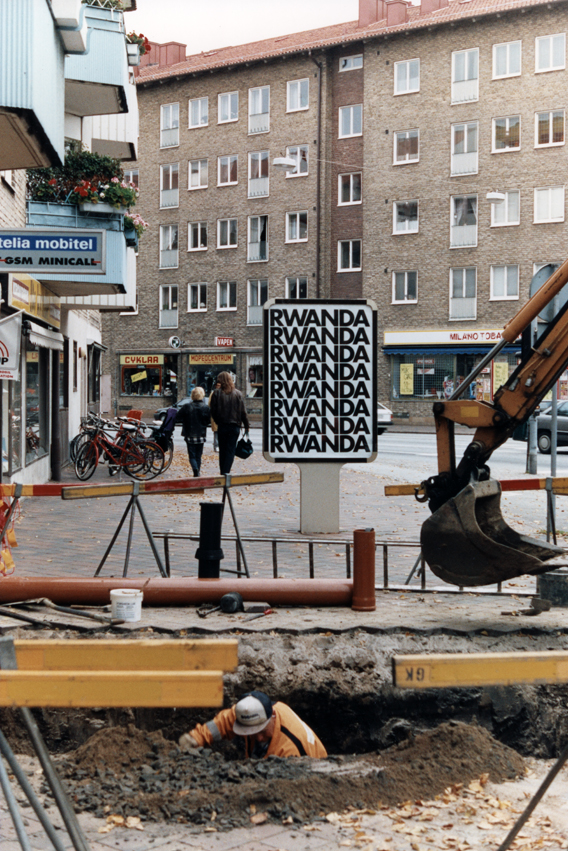 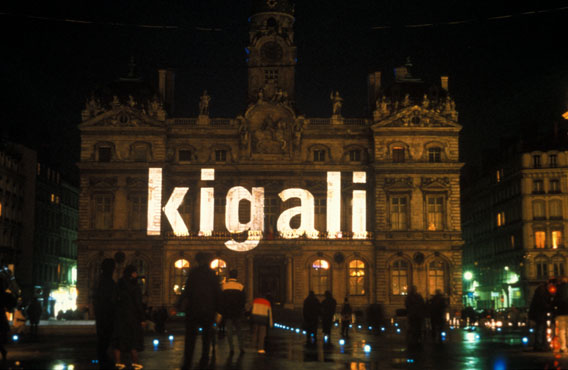 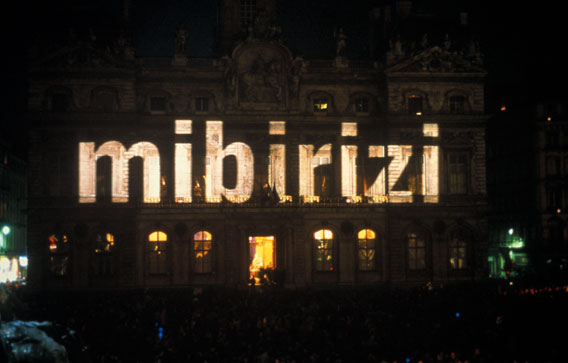 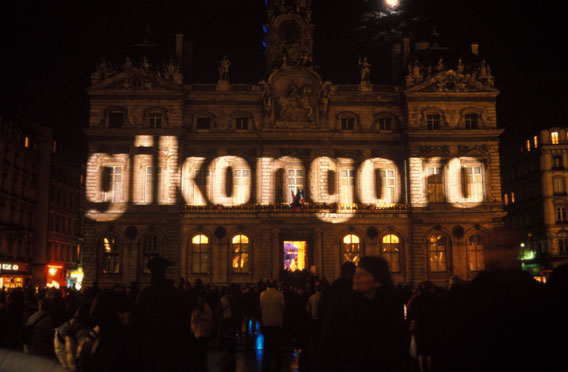 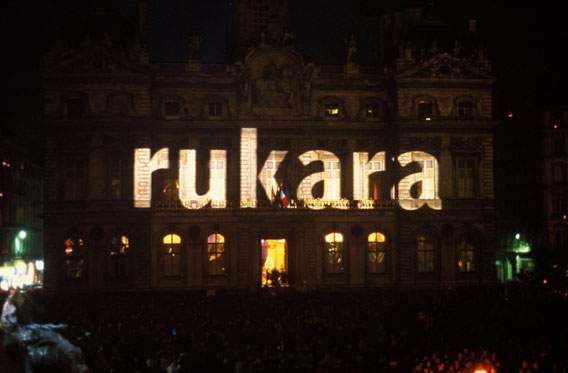 Alfredo Jaar is an artist, architect, and filmmaker who lives and works in New York. He was born in Santiago de Chile. His work has been shown extensively around the world. He has participated in the Biennales of Venice (1986, 2007, 2009), São Paulo (1985, 1987, 2010) as well as Documenta (1987, 2002) in Kassel. Important individual exhibitions include The New Museum of Contemporary Art, New York, Whitechapel, London, and Museum of Contemporary Art, Chicago, as well as the Museum of Contemporary Art, Rome and Moderna Museet, Stockholm. A major retrospective of his work took place in 2012 at three institutions in Berlin: Berlinische Galerie, Neue Gesellschaft für bildende Kunst e.V. and the Alte Nationagalerie. Last year Alfredo Jaar represented Chile at the 55th Venice Biennale. He has realized more than sixty public interventions around the world. He recently completed two important public commissions: The Geometry of Conscience, a memorial located next to the just opened Museum of Memory and Human Rights in Santiago de Chile; and Park of the Laments, a memorial park within a park sited next to the Indianapolis Museum of Art. More than fifty monographic publications have been published about his work. He became a Guggenheim Fellow in 1985 and a MacArthur Fellow in 2000. In 2006 he received Spain's Premio Extremadura a la Creación.

Reviews by Nirupa Umapathy
The War on Terror Goes on Trial
Opinion by Anna Arabindan Kesson
What is Tamil for Loss? Remembering the Sri Lankan Civil War
Art by Taylor Miller
South, and by the Sea: Palestine and Arizona
videos by
An Evening of Poetry from the Horn of Africa
Reportage by Kate Bartlett
Srebrenica's Battle for Truth, 22 Years On
Art by Melissa Rodriguez
Art becomes therapeutic for refugees
Opinion by Kate McCabe
Refusing the Silence of the British State
Art by Claudia Zini
Beauty, Brutality and Roma Identity in Selma Selman's Art
Poetry by Andy Young
Two Poems
Reviews by Alexander Dawson
Rwanda and the Sorrow of Surviving
Like any of the articles? Support our work.
Donate Now