Layziehound has a bit of Muhammed Ali about him. He towers over most humans, for one thing. He's also a compulsive self-narrator—when he’s in the zone he moves through the world in a cloud of rhymes and stylistic flourishes that form and re-form as only poetry can. Then there's the name change. Layziehound adopted his moniker as a fine arts student, causing a string of administrative and philosophical headaches at his art college. This was no passing fad of the psyche, though. A decade on, the hound, like his artwork, is still loud and poetic.

The first ten years of democracy were characterised by young South Africans like Layziehound doing new things in new ways. Within the cracks and corners, Johannesburg's youth in particular created lyrical, progressive art, music and poetry that addressed everything from identity to politics. Layziehound's art fit with these times. It was iconic and bright, and his imagery smacked of the rough graphic aesthetic of independent hip hop. Young faces were central in many of his pieces. There were also lovely eponymous flourishes—a series of the hound whistling, and another of him playing the city like an accordion. 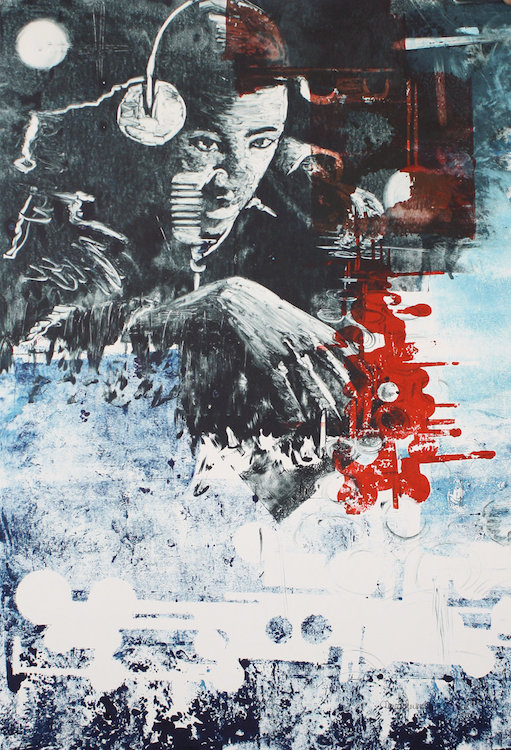 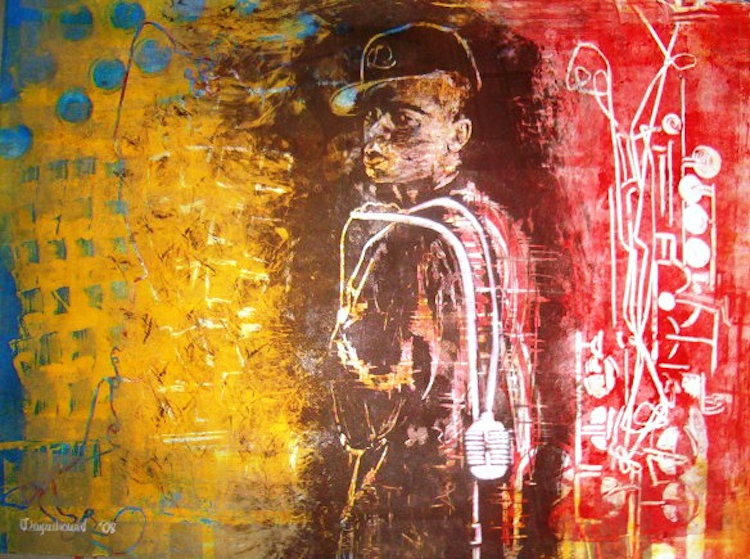 When too much has been said 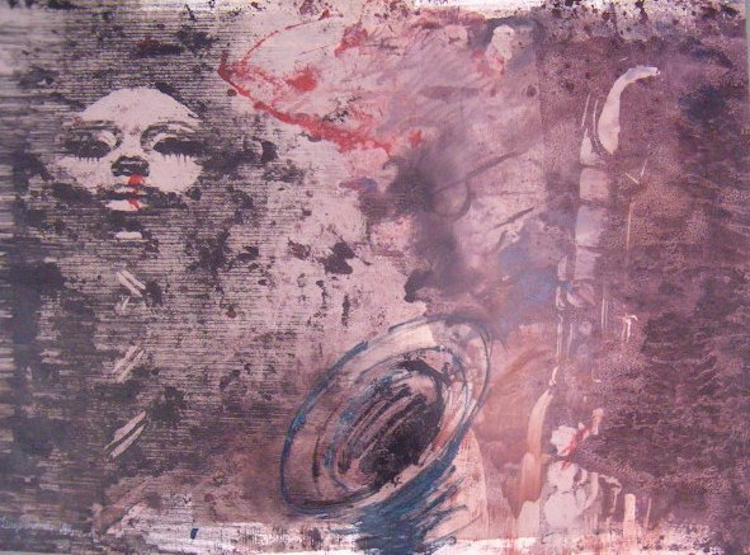 Layziehound left Johannesburg in 2009 for three years, returning to his home in rural KwaZulu Natal to be with his mother. In that time, the urban youth scene began expanding its focus to the socio-political structure of the country itself. By 2015 he was back in the city and presenting new work. His art still fits with the times; now it is dark and quick and political. Gone are the fusions of colour and urban style, replaced by stark black and white strokes. Gone are the young faces, in their stead disturbing images of men in suits.

Layziehound's suits appear brazenly and often repulsively self-absorbed. None seem capable of observation beyond delight at what they find in their hands: money, the levers of power or a piece of ass. Yet the eponymous hound is still present. Some pieces feature a cruel looking Layziehound in a suit, evoking the question of what would happen if the current youth generation behaved in the manner of many of its political leaders.

“There are no suits where I come from,” he says in explanation of his theme. “Only on a Sunday, for church. Otherwise nothing. If you see someone in a suit you know something big is going on. But up in the city suits are everywhere. All the foxes are in the most expensive cloth, as if they are doing big important things. But they are not. They are just serving themselves.” 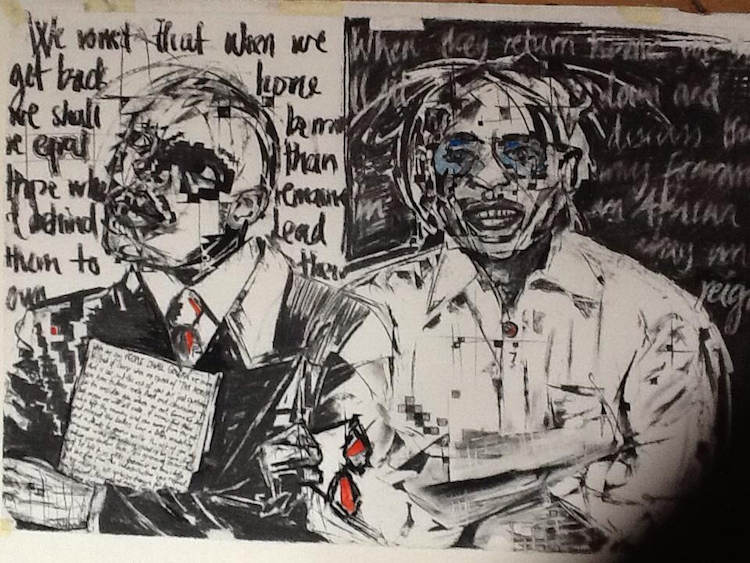 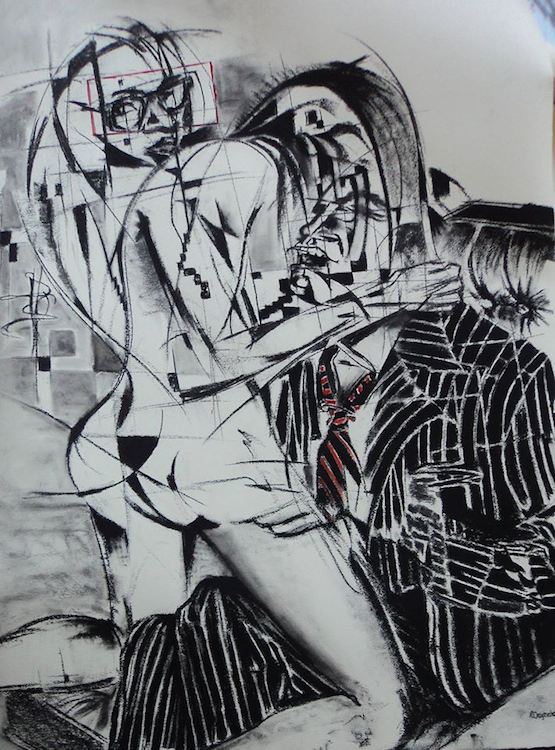 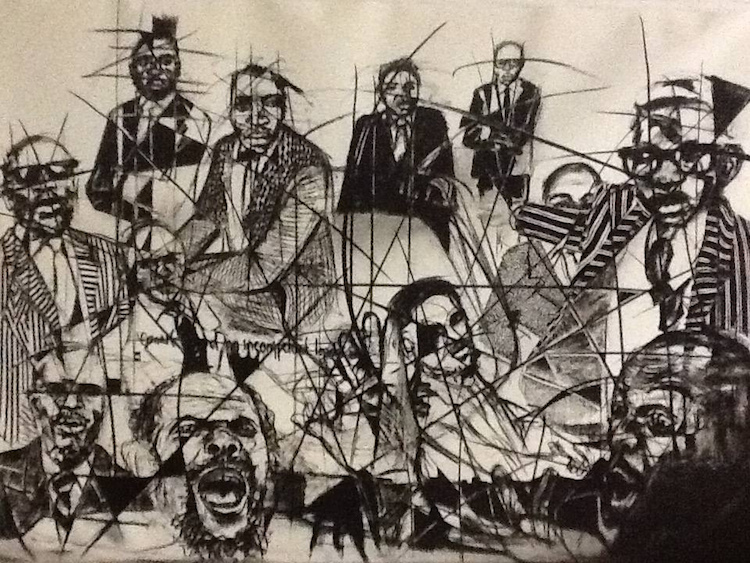 G12 Caucus that has no agenda for the third world 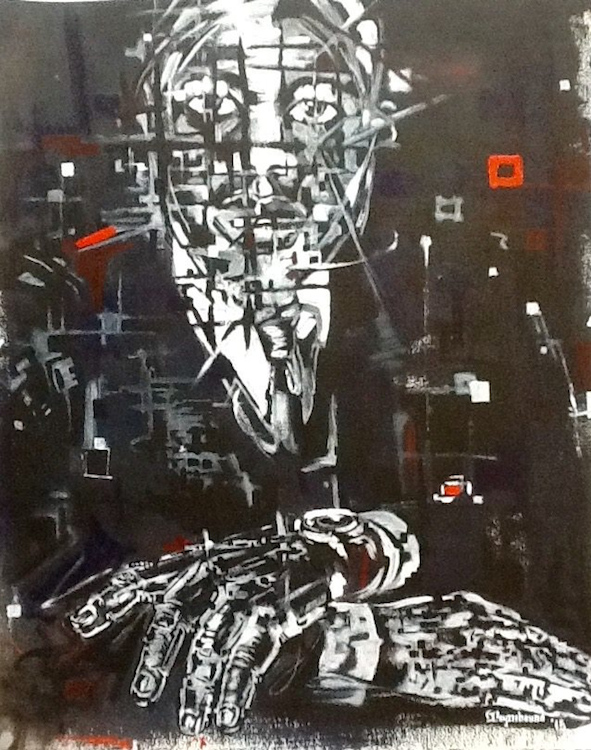 Layziehound's art indicts South African leadership at all levels: businesspeople, government, religious leaders... no suit is spared. This condemnation reflects the zeitgeist of 2015, a year in which youth movements shook the foundations of South African history, business, government, education and much else.

Coalescing around the statue of Cecil John Rhodes at the University of Cape Town, youth fervour spread to the rejection of colonial-era statues across the South African landscape, especially at educational institutions. Statues were toppled, victories claimed. Following this, a bigger challenge against a more daunting target—university fees. Persistence compelled a reluctant acquiescence from the government. Minister of Higher Education 'Blade' Nzimande slowly emerged from the houses of parliament to address a student protest marked by riot police in full swing. Students booed him away and refused to let him speak. He was too late, and too reticent for their appetite. Shortly thereafter, president Zuma announced that university fees would not increase. He issued his statement from inside the union buildings while thousands outside demanded to hear from their leader in person.

South Africa's ongoing wave of struggle and protest has been extensively documented. Yet the nature of the discussion has been the subject of debate among many young intellectuals. In the ongoing articulation of the ‘South African youth narrative,’ a key question among young South African intellectuals throughout 2015 has been: 'Who benefits from telling 'our stories' in the way they are currently told?'

Within this context, the quality and accuracy of mainstream coverage (of international and local varieties) of youth issues and actions is increasingly irrelevant in the creative streets of Johannesburg, where media suits—global and local—are perceived as merely serving up another iteration of the colonial gaze. There is an alternative life in the blogs, social media, the stage, the gallery walls, and the streets, where a new narrative paradigm, detached from traditional media powers, is fast emerging. Among many others, bands like The Brother Moves On, essayists like Lwandile Fikile and web sites like Africa is a Country and The Daily Vox are notable for their focus on telling new African stories in a new way.

Equally notable was a statement made at the 2015 Franshoek Literary Festival by writer Thando Mgqolozana. 'Look at yourselves!' he barked at an all white audience, stating his intention to remove himself from established white dominated literary events. The literary establishment’s reaction involved tears, conferences, talk-shops and such. Black writers, on the other hand, have looked to attend and support new events, developed and managed by new role players, often, but not exclusively, black. 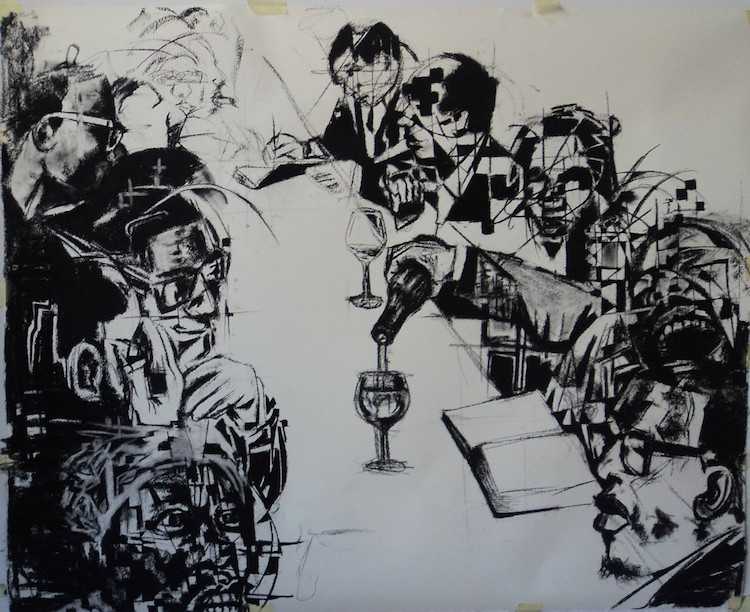 Democracy gone mad from the top 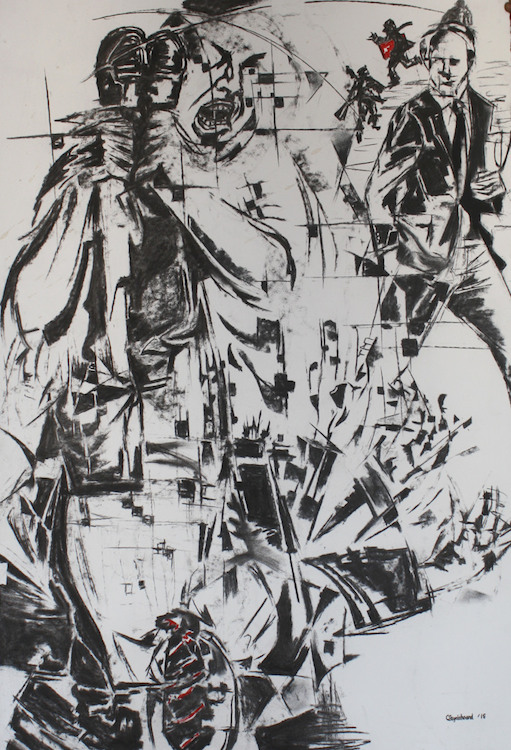 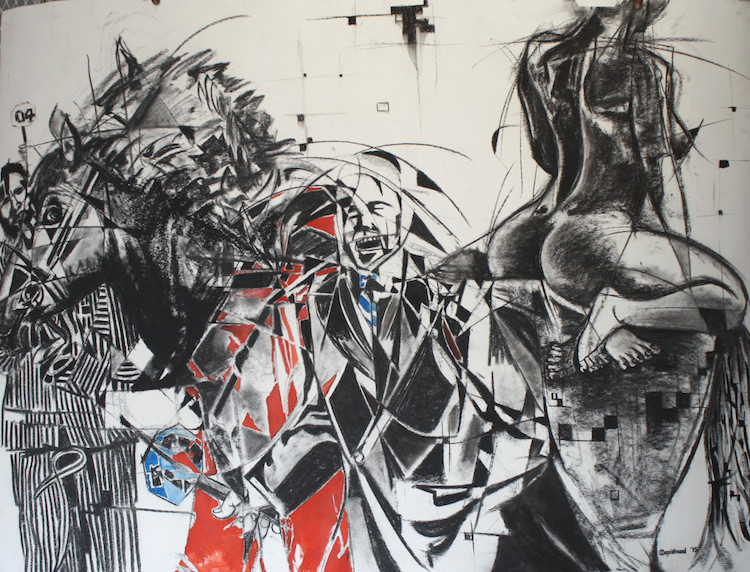 Suits bidding for the horse 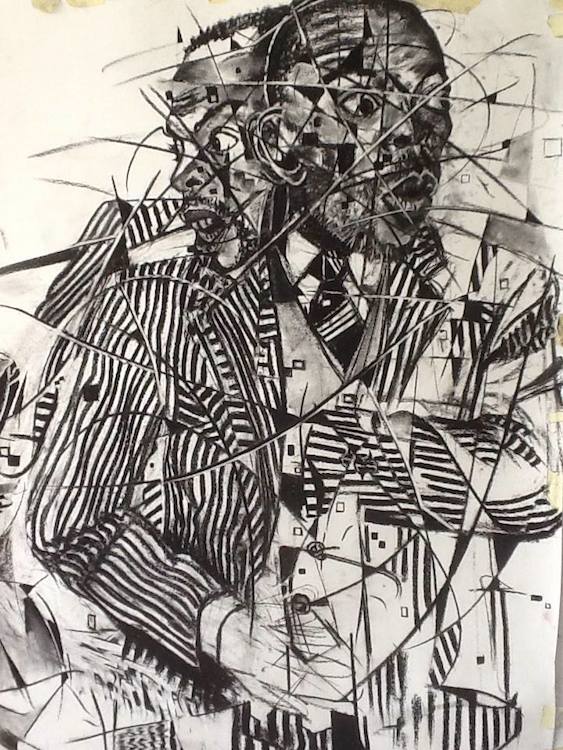 Until there is nothing left to steal

Frantz Fanon has been an increasingly common philosophical benchmark among young South Africans in 2015, while physical vehemence has become an important and obvious element of the protest movement’s achievements, along with narrative independence. South African youth voices are thus likely to prove increasingly disconcerting for local leadership and members of international media and NGOs, many of whom have been weaned on the essential idea of fragile African youth needing to be 'developed' by wiser elders. In fact, taking note of the words and actions of South Africa’s youth movements, it becomes clear that the emerging generation of artists, intellectuals, and activists have proven their will and capacity to forge the country’s future, and to provide a new example to their elders.

To create meaningful solutions to the myriad socioeconomic issues of postcolonial South Africa, suits may need to learn to think far more expansively and creatively than before. To whit: within the troubled context of 20 tough post-democracy years, one of South Africa's most obvious strengths lies in community. Look around in youth communities, and communities in general, and you'll find a plethora of individuals and micro organisations picking up the slack left by often incompetent state governance. Might there be a way for the country to build on this innate strength? Can its leadership move past the top heavy and remote governance structures inherited from colonial and apartheid governments and re-involve itself with local people, on the ground? What work remains in the decolonizing project? 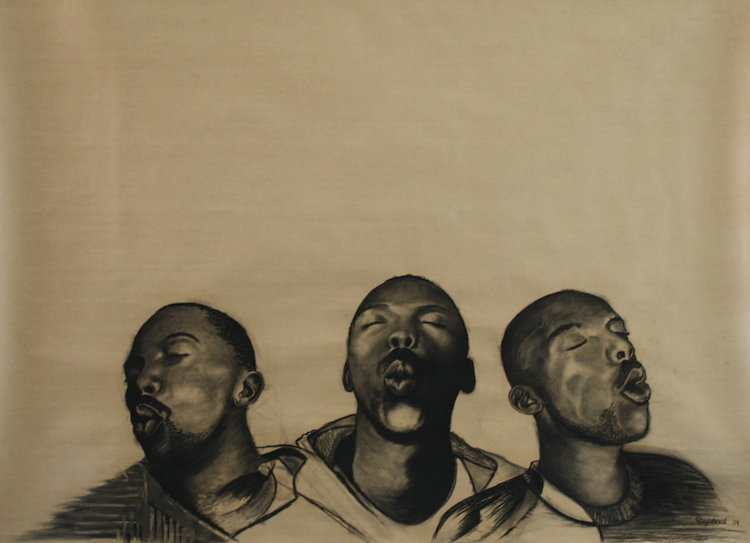 South African youth have determinatively met these vast theoretical challenges with concrete actions and tangible changes. And the significant pressure they have placed on government, business, and civil society leaders lives in Layziehound’s intricate, indicting depictions of the suits. Robin Hood Doing Justice shows a community member shaking a suit angrily by both feet, attempting to release some of his ill-gotten gains back into the street. Another suit marches past, watching without engaging, the length of his stride and the papers under his arm telling us that, despite the violence and corruption abounding, he has more pressing engagements to deal with. The piece poses a stark open question: for how much longer will a suit like this be allowed to walk through communities without stopping?

Metaphorically - whether in art, poetry, music or marches - South African youth are demanding that national leaders remove their favoured battle attire and assume the cloth of community. Layziehound's art, among many other creative works emerging from creative centres like Johannesburg, implores South Africa's leadership to locate the emotional vision necessary to go back out into the world and re-learn how real people dress and speak and actually live. If the events of 2015 are any indicator of things to come, local leaders would do well to take the hint.

Layziehound is a Johannesburg based fine artist, born and raised in Bilanyoni, Zululand. After attending Boksburg College in 2002 and Pretoria Technikon in 2003, he moved to Artist Proof Studio in 2005 to study printmaking, and currently works as an independent artist from his studio at August House. Layziehound has held two solo shows: Lyrical Sense and Sounds of Philosophy (Peach Hotel, Melrose, Johannesburg [2010]) and Do What You Love and Love What You Do (Unity Gallery, Johannesburg, [2010]). He has also participated in a number of group exhibitions in public spaces and commercial galleries.

Reportage by Steven Herran
Social Media State: Crushing Colombia's "Cacerolazo"
column by Esther A. Armah
BEWARE! Statementism and Tweak-o-nomics
blog by Warscapes
African Authors Sans Frontieres in Solidarity with African-Americans
Conversations by Nathan Suhr-Sytsma
What binds us, in this boat: Poet ‘Gbenga Adeoba on migration
blog by Warscapes
Open Call: The Corona Notebooks
Reviews by Nirupa Umapathy
The War on Terror Goes on Trial
Art by Melissa Rodriguez
Art becomes therapeutic for refugees
Art by Claudia Zini
Beauty, Brutality and Roma Identity in Selma Selman's Art
Poetry by Andy Young
Two Poems
Opinion by Fabio Andrés Díaz
On the Brink of Peace
Like any of the articles? Support our work.
Donate Now