The Aisle. Reach, engage, stretch across it. So says Biden, and the Biden camp post the US election win. After these last four years, the aisle has become a political middle passage. It is a space strewn with the debris of a decimated democracy; abandoned policy, caged children separated from their parents, grieving families from COVID, super spreader rallies, Supreme Court Justice sexual assault hearing, the corpses of black bodies slain by the police, unindicted police officers, gun-toting white men from militia groups, and 911-calling white people. It is a space filled with vulnerability and insecurity from a normalized racism and an intimate relationship with violence cheered on by political leadership.

This moment represents an intra-political party reckoning for the Democrats and the unhealthy notion that there can possibly be any reaching across an aisle that happily stares at dead babies, violated black bodies, decimated black lives and nods vigorously yes, this is a democracy I can believe in, we can restore, unify and heal with an aisle-reaching politics.

The reach, the call by Biden for healing has been mirrored by others – like Democrat John Kusich - imploring all of us to really listen to the centrists and the republicans, to listen to those who lost. That call has been similarly echoed globally by English writers like Janet Daley writing in The Telegraph – a right-wing English broadsheet newspaper – in which she laments the loss of the kind of listening to, what she called "the economic anxiety" of the ordinary voter.

In the forensic post-Biden win analysis and call for healing, it matters that we root this election in the history of a global Black people, and recognize that this is a call for racial healing and unity. So, we must interrogate this within a historical context of global black people, whiteness, politics and racial violence.

This goes beyond healing from division and disagreement. Nor can it be summed up as economic anxiety. This was racialized violence, and the most profound abuse of power.  It was a deep nod to a history of white supremacy and overt racism, a rabid satiated hunger for a return to a land where white men in trucks hunted black people, and faced no sanction. It was a welcome to a land where black people are haunted by the incessant shadow of violence, and must navigate gingerly around white men and women. It is that America that millions lamented, longed for, returned to with Trump and his administration. It is that America that Joe Biden must reckon with.

That reckoning requires an engagement with a politics of emotionality.  This is about a politicized empathy within a racialized emotionality.

Empathy. Empathy conveys validity, that a perspective, an argument, a focus has merit. White supremacy, fascism doesn’t. Who suggests that a survivor listen to a rapist as a way to resolve the trauma of their rape? No. The work has become to center survivors, to privilege their stories, their healing. 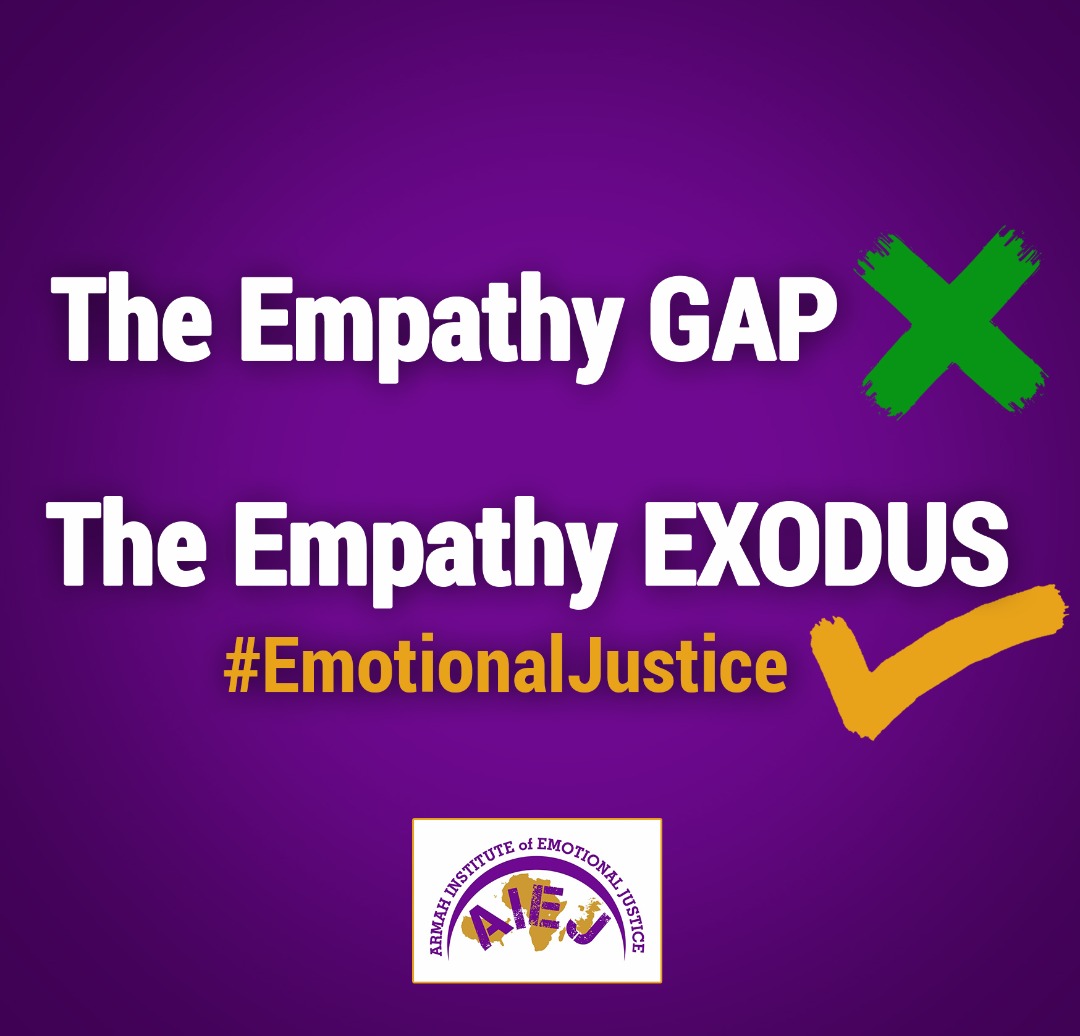 The millions who organized, strategized, rallied and navigated paths of voter suppression, heightened racist violence, converging pandemics to make their way to cast their ballot merit empathy. The families who found daily activity interrupted by escalating Karen armies, cell-phone toting white folks, whose particular weapon was whiteness, 911, and a state-sanctioned power that validated their invalid calls with unwarranted excessive force deserve empathy. It was in the knowing, the dangling of the 911 call threat, knowing that their whiteness carried not power but a valid abuse of power, and black folk knowing that facts and truth are not the foundation of policing, and so the fear in faces and eyes was a delight to the 911 callers who got high on black fear. There was a delight in the threat, the terrorizing, dehumanizing, denigrating of black life.

Early voting reports revealed long, long lines, and waits of 5, 6, 7, hours. Those long lines were reminiscent of South Africa in 1994. Hours long lines of a people casting their vote and becoming political citizens for the first time.

That election campaign triggered bloody explosions of racialized violence, with rabid white supremacists anxious for there to be no election, and livid at the notion of a new government led by black people, and millions of black voters. This US election saw racial violence with caravans of Trump supporters seeking to intimidate, and incidents shown on social media of Trump supporters zeroing in and surrounding those who do not support him, calling them racial slurs and using naked intimidation tactics.

In South Africa, the aftermath of the election saw Mandela call for healing, for unity, for empathy. It would led to the creation of The Truth and Reconciliation Commission. That call was also a politicized empathy within a racialized emotionality.

It is an empathy expected, required and reserved for the white South Africans who were "losing," who held "economic anxiety," and who were anxious that the brutality they had meted out to black folks would return to visit their own heads, and those of their children. It was tied to the politics of the election. It was racialized emotionality - when we take an emotion, and add color, context, and consequences.  In South Africa’s case, it was vulnerability, forgiveness and pain. It was white folks’ vulnerability that was elevated, it was black forgiveness of white supremacist violence that was expected, and it was the pain white folks were suffering that required empathy. Empathy was the emotion, the color was whiteness, the context was apartheid and the consequence was white people somehow deserved the empathy for their pain, and that pain was elevated above that of black folks. Indeed, black folks were being called on to privilege, center and prioritize the pain of white folk over their own.

This was "emotional patriarchy" – that system in which society caters to the feelings, the vulnerabilities, insecurities, anger, pain of whites no matter the cost and consequence to society, to black people

That call from South Africa’s newly elected leader, echoed an earlier one in Kenya in 1964. The leader was Jomo Kenyatta. It was the aftermath of the Mau Mau uprising, a battle for freedom, land and cultural identity. The British perpetrated the kind of violence against the Kenyan people that mirrored the brutality of enslavement in the anti-bellum South. The response was for Kenyatta to reach across the aisle – across the 1.5 million Kikuyu interned by the British, across the sexual violence perpetuated against Kenyan women, the torture and slaughter of Kenyan men, all with the knowledge and sanction of the British government – to say forgive and forget. Forgetting is, of course, impossible when the scars of the struggle, slaughter and sacrifice are etched into the faces of Kenyan people, when the land is soaked in the blood of their bodies, and the legacy of that untreated trauma lingers so that white life is valued, white pain is privileged, and white lives mattered more than black.  Years would pass and the entrenched cancer of emotional patriarchy would make Kenya, a paradise for white British folks, and a living graveyard for millions of Kenyans. The legacy of the scars and the ongoing twin delusions of white superiority and black inferiority linger, run deep, taste bitter. Organizing by the veterans from the Mau Mau seeking justice against the British government would culminate in a court case they won. On the floor of the UK’s House of Commons, then prime-minister William Hague announced the multimillion-pound settlement. During the statement he would say of the Mau Mau uprising and British enforcement and violence: “there were atrocities on both sides”. This is the equivalent of Trump saying there were fine people on both sides in reference to Charlottesville protests that led to the killing of Heather Heyer.

Equating the war against injustice with the battle to uphold white supremacy is much more than a false equivalence. It roots healing in a racialized emotionality, a politicized empathy dominated by emotional patriarchy.  This instinct to treat racialized violence with empathy, extending hands and forgiveness is what South Africa offered the architects of apartheid in the aftermath of 1994. When in 1964, Jomo Kenyatta said of the murderous British who had rampaged, raped, killed and terrorized Kenyans, that they should forgive and forget, that action helped maintain the path to expand the medusa like head of white supremacy.

There is no healing in a world where domestic racial terrorism is met by empathy towards the terrorists by the terrorized. That only entrenches the emotional patriarchy that occurred – and continues - in South Africa and in Kenya. Black and brown folk in America cannot – and must not - listen as millions of white folk articulate their fears, insecurities, vulnerabilities to co-existence as if they are legitimate, reasonable and can be reasoned away with empathy. This is not and cannot be about reconciliation, it must be about accountability. No path to justice comes from this politicized empathy, only entrenched inequity.

Resist. Resist the ongoing humanization and normalization of white supremacy, resist its mainstreaming.

This is the moment for the empathy exodus.

This political healing is not an individual 12 step program where black folks struggle and sacrifice and white Trump supporters stubbornly adhere to beliefs that result in black folks burial. This political healing must be backed by governmental weight, by institutional clout, by foundation dollars, by policy creation, by organizational cultural implementation. Black people fought, strategized, organized fiercely to deliver a victory. That fight should offer them more than peace, a chance to rest their heads and be pulled back from a precipice of a solid diet of escalating racist violence, an uncaring president and normalized racism. The new Special Interest groups of Washington DC must be those to whom Democrats owe victory.

Reserve no empathy for the ugliness of white supremacy, offer no hand, extend no good will. White supremacy must be starved of empathy. There should be no safe haven for racial violence. Not one iota of empathy should be directed at supporters and voters of Trump by black folk and people of color. No time should be spent seeking, exploring, interrogating, engaging or figuring out how to reach them. This is not our work.

Emotional patriarchy – one of the four pillars of Emotional Justice - is a crucial part of the system that is white supremacy.  There is only one thing to do with a system. Uphold it or dismantle it.

Emotional Justice for white people – the specific work for those who claim ally ship, who believe in freedom and liberation – is to center dismantling emotional patriarchy. The work of white women is to forensically challenge their Trump-supporting sisters, and the men that they love. To struggle with them, to call them out, to sacrifice them in order to choose liberation, humanity and freedom – that is their intimate reckoning. It is for them to call the men in their lives to account. This is what black women have always done, and been willing to do. For this work, they are routinely described as traitors, as treachorous, are accused of not loving black men, hating themselves – and yet when black men’s behavior threatens the health of the whole it is called out.

We must stare across this political middle passage that is the aisle and the millions who voted for Trump and declare we will not negotiate with emotional terrorists. We will not be the emotional currency you engage in order to lick manufactured wounds within a politics that sanctions black folks’ stolen breath, choked rights and dead babies. Resist. Starve whiteness’  manufactured fear of the oxygen of empathy.

There must come a point where we reckon with a history that says the response to racialized violence is empathy towards those who perpetuate it, uphold it, support it and vote for it. No. Global black folk, let’s get to stepping. It is time for an empathy exodus.