Over the first week of July, Mr. and Mrs. Hyder Ghulam Bhat were confronted with a difficult decision. They had to call off their daughter's wedding.

"We regret to inform that due to prevailing circumstances in the Valley, the marriage ceremony of our daughter is hereby postponed," their announcement in the local paper read.

The "prevailing circumstances" referred to deadly fighting that broke out on July 8 in the Indian administered part of Kashmir, where they live.

So far, 45 youth have been killed, some 3,140 people injured (half of them security personnel) and hundreds of civilians blinded by pellet cartridges that fire 500 tiny metal balls per round.

This is life in Indian-administered Kashmir these days. Weddings, graduations, school exams, hospital visits, funerals and even births can be cut short due to unexpected outbreaks of violence. The temperature has long simmered, with periodic triggers making the militarized zone boil over.

It was Maqbool Bhat in the 1980s (co-founder of Jammu Kashmir Liberation Front, hanged in 1984 in Tihar Jail in New Delhi); Afzal Guru in the early 2000s (convicted for his role in the 2001 Indian Parliament attack and executed in 2013); and this time, 22-year old Burhan Muzaffar Wani, a self-proclaimed commander of the militant separatist group Hizbul Mujahideen, killed by Indian security forces on July 8th. All three men were Kashmiri separatists, deemed "terrorists" in the parlance of the Indian government and made "martyred freedom fighters" in the eyes of many Kashmiri civilians. 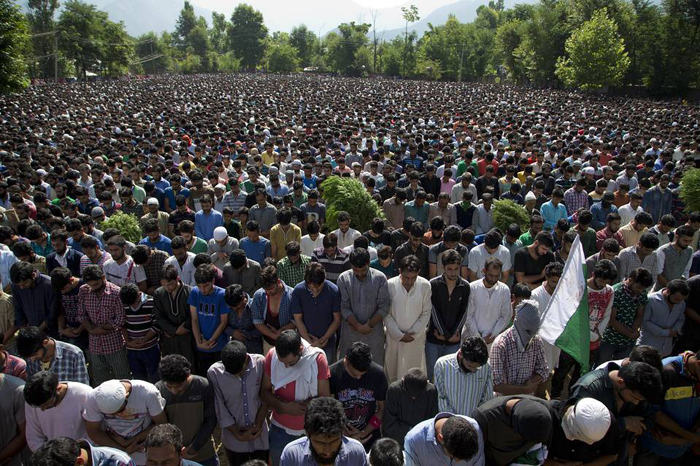 Mr. and Mrs. Hyder Ghulam Bhat got their newspaper announcement in just under the wire; a few days later, local news circulation came to a grinding halt under orders of the Indian government. The printing presses went silent following police raids in which freshly inked plates were literally seized from presses and the offices of the Kashmir Reporter and other local papers indefinitely shuttered. It was no coincidence that the Reporter just published a story detailing an attack against a family, including the rape of an ailing woman, while they were en route to the hospital.

This was the first-ever official ban on media, which the government cited as a “reluctant move” to avoid misinformation, and the first such raids since the 1990 Gawkadal massacre which, as a result, received virtually no media coverage.

The Kashmir valley, long serenaded by travelers for its arresting beauty, became an open prison in the decades following the partition of India. In 1947, amidst the birthing of two giant states, India and Pakistan, the neonatal cries of the esrtwhile princely states of Jammu and Kashmir fell on deaf ears, Kashmiris calling for azadi (freedom). Indefinitely divided between the influence of three much larger sibling states (the third being China), Kashmir’s quest for self-determination has been stunted amid the expansion of India's military industrial complex.

Kashmir’s geostrategic importance to all sides is that it serves as a natural buffer zone, one that the Indian government has called its atoot ang – an “un-severable limb.”

Amidst well-substantiated narratives of torture, rape and the overall subjugation of their communities by the Indian armed forces, Kashmiris view the military as a tourniquet ever tightening around their throats, squelching their voices, especially in circumstances of political dissent. Many Kashmiris support seceding from India, but at the same time, do not want to join Pakistan.

The killing of Wani, a social media celebrity who disclosed his identity and made no secret of relinquishing the wealth of his family when he took up arms at the age of 15, enraged Kashmir's youth, which took to the streets in protest. The Indian military might have used water cannons against similar-sized protesters in other parts of the country, but in Kashmir, where the rules are different, opened fire on stone-pelting teenagers. 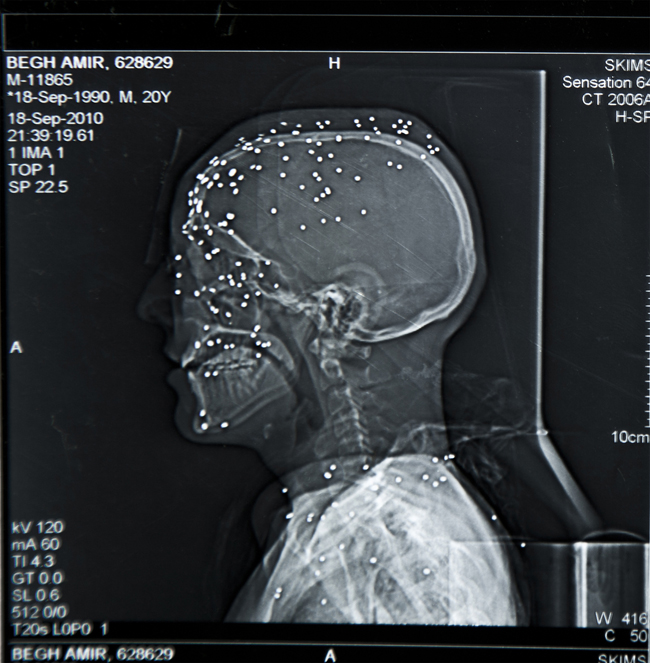 An x-ray of the skull of Aamir Kabir Begh, 21, shot at close quarters in a clash in 2010, shows numerous pellets, resulting in a total loss of sight. He was one of the first casualties after the introduction of pellet rounds by Indian security forces (©Vivek Singh).

The first contingent of Indian soldiers arrived in Srinagar, the already restive capital of Jammu and Kashmir, on October 27,1947, just months after Indian independence. They never left.

Today, with about 700,000 soldiers - roughly one soldier for every 10 Kashmiris, the highest ratio in any current counter-insurgency operation - the Kashmir valley is the most densely militarized area in the world, the conflict having claimed 70,000 lives, with some 8,000 forced disappearances, to date.

It is a highly palpable occupation: countless army barracks, military checkpoints, armored vehicles moving in all directions, restricted movement and arbitrary detention. It is designed to crush any and all resistance, and to quell the thirst for self- determination amongst Kashmiris. In the name of maintaining law and order, the Indian government has employed methods akin to colonization.

Yet, when the violence reaches a pitch point of probable war crimes – the Indian Army’s use of weapons that blind young boys, deliberate attacks on hospitals, torture and rape – the world hears very little about it.

The international community has been complicit in its silence, especially American leaders who have cozied up with India, touting the country’s “democratic vigilance” while writing off Kashmir as an “internal issue.” The US has expressed a keen interest of late in learning from India’s “counter insurgency operations” while conducting annual military drills alongside the Indian army.

Imagine growing up in a curfew culture where your movements are tracked, your political voice is stifled and your social existence killed off. This is the status quo in the Kashmir Valley, where 60 percent of the population is below 30 years of age. However, based on how current events in Kashmir are being discussed in a majority of Indian media, policy circles and amongst ordinary citizens, it appears that most Indians find this reality hard to imagine. The average Indian is no longer cognizant of how the state has dehumanized an entire population by consistently discussing Kashmir through a security prism, and only during “security crises” and “border infiltrations.”

This has caused a slow and systematic “social death” – a method that has been effectively employed by governments through the segregation and exclusion of communities to the point that they become less than human in the wider public eye. These are the same policies that were applied during slavery and apartheid regimes and dictatorships.

There are several misnomers that need to be clarified and acknowledged in order to turn the oft-hysterical patriotic responses to the question of Kashmir into a semblance of pragmatism.

Terrorism is not the gravest threat for India. Inequity and the resulting political disenfranchisement are the culprits. Kashmir is the most acute example. Kashmir cannot simply be viewed through a one dimensional security prism. New Delhi must start negotiating a political solution. The nexus between neoliberalism, nationalism and militarism has helped perpetuate the violence; it must be dismantled. A fourth military conflict between the two nuclear powers, India and Pakistan, must be avoided at all costs. An internationally arbitrated resolution on Kashmir is overdue.

Indian policy towards Kashmiri separatist groups - which has oscillated between dismissal and excessive force - must be more forthright. Such groups are either a legitimate political “threat” or not. Such acknowledgement, even if hostile, would bring much needed honesty to the conversation. Meanwhile, avoiding the conversation all together and driving them underground only exacerbates the “militancy,” as has been proven time and again.

Ultimately, India cannot resolve the question of Kashmir without involving Pakistan. Given their natural, geographic, cultural and psychological proximity, the two states should focus on improving bi-lateral relations while avoiding larger, self-interested players like the US. At 69 years of age, both states should have matured to the point of being able to arbitrate without a third-country umpire.

Many in India argue that Pakistan’s occupation of a part of Kashmir following partition killed the possibility of a plebiscite on the issue of an independent Kashmir, but they also know full well that a direct vote on the question of self-determination in the Indian administered parts of Kashmir would reveal that a vast majority are living as unwilling constituents.

Congress leader Jyotiraditya Scindia is among the very few who have explicitly called for a direct referendum vote on the issue of Kashmir. Speaking in the parliament in recent days, he referred to the “increase in infiltration and deaths of Indian soldiers,” but also called for a “plebiscite” and the “need to create an environment of peace and tranquility and growth and development." Such voices calling for pragmatism to prevail have been far and few in between.

It is time that Indian Prime Minister Narendra Damodardas Modi starts to pay heed to such advice and extends ties with Pakistan by following in the footsteps of his predecessor Atal Bihari Vajpayee, also a BJP member, who fostered progress in normalizing relations with Pakistan in the early 2000s.

It is high time that India surmounts the political impasse on the question of Kashmir within and without the country.

Preethi Nallu is a frequent contributor to Warscapes and managing editor of Refugees Deeply. Twitter @Preethi_Nallu

Reviews by Sneha Khaund
The Personal is Political in Assam's Insurgency
blog by Warscapes
Questioning Racism in the Indian Diaspora: Cultural Perspectives
Reviews by Samadrita Kuiti
Queer, Digital, Indian, Neoliberal?
Reportage by Priyamvada Gopal
Insurgent Empire: Anticolonial Resistance and British Dissent
Reviews by Arpita Mandal
Nation as Parent in Netflix's Delhi Crime
Poetry by Uzma Falak
The Last Call: Audio Postcards from Kashmir
Reviews by Deepali Srivastava
Kamaladevi Chattopadhyay, the intersectional feminist we should all know about
Opinion by Deepali Srivastava
Liberation in Tradition: Lahore Literary Festival in New York
Opinion by Ikram Ullah
A Century in Defiance
Opinion by Suchitra Vijayan
Curfew is the Camp
Like any of the articles? Support our work.
Donate Now