For a small community of ethnic Turks who have lived peacefully in Ukraine for twenty-five years, the current conflict is allowing the dream of a distant homeland to resurface. “With this war, Ukrainians have nowhere to go. But we do,” says Makhmud Manmedov, who manages a Turkish café in the southern Ukrainian city of Kherson. Somewhat amusingly called “Big Shef” in English, the restaurant could easily be mistaken for sitting on a quiet Istanbul side street. Men sporting thick moustaches enthusiastically smoke on its patio, drinking sugary tea out of small glasses shaped like tulips. Photographs of glittering Turkish mosques hang on the walls inside, where the soft sounds of an Anatolian dialect swirl between its customers. “Many want to leave for Turkey now. My sister moved there earlier this month,” fifty-two-year-old Manmedov tells me, before adding that he is “too tired for another move.”

Similar to the Chechens, the Tatars, the Ingush, and a host of indigenous peoples across the Caucasus and Crimea, Josef Stalin deported the Meskhetian Turks to Uzbekistan, Kyrgyzstan and Kazakhstan en masse in 1944. In total, Stalin forcibly removed some 1.4 million indigenous people from the Soviet-controlled lands. The entire population of 100,000 Meskhetian Turks was parcelled up and packed into cattle cars for the one-month journey. Thousands died from frost and starvation, and of those who survived, they were forced to endure primitive living conditions. Unlike the others, however, whom he accused of collaborating with the Nazis, the Soviet reason for deporting the Turks was never given. (It was later thought that Stalin wanted to annex the Turkish Straits, and therefore viewed the population—who lived in Georgia’s mountainous region of Meskhetia on its border with Turkey—as potential opponents.) The scars run deep: in Chechnya, the deportation is largely viewed as having fueled the separatism responsible for two wars with Moscow. While other deportees to Central Asia were rehabilitated and allowed to return to their homeland by the Soviets, the Meskhetian Turks were forgotten. By comparison, the Chechens were gradually allowed back from the 1950s; the Crimean Tatars from the 1980s.

In 1989, Soviet troops booted them out of Uzbekistan, where they had largely settled in and around the cotton-lined Fergana Valley, able to continue their farming lifestyles. “When we were kicked out of Uzbekistan, we looked at a map of the Soviet Union, and thought, ‘now where to go?’” Manmedov tells me in his café, where he smokes one unfiltered cigarette after another. As we talk, slices of watermelon and pide—stuffed Turkish flatbread—are brought to our table. “We needed somewhere with warm, good earth, so that we could work the ground. So it made sense to come to Ukraine.” 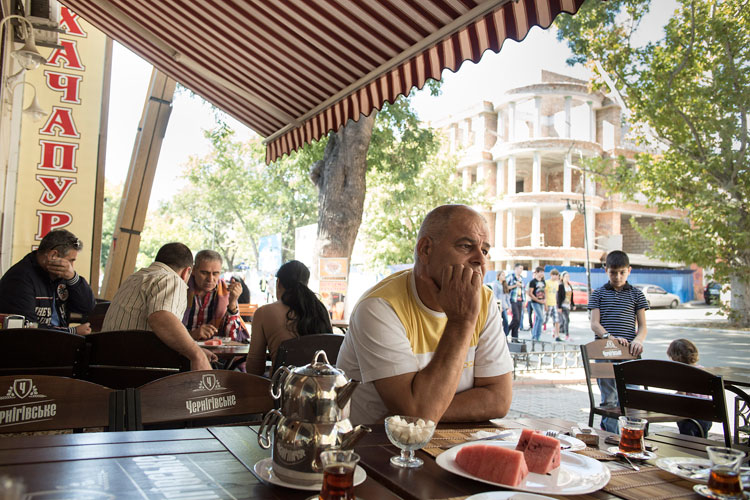 Zakhadin Aslanov in his home in the village of Krestovka, with his 8-year-old granddaughter Belora.

The war in eastern Ukraine is now threatening to displace the community for the third time in seventy years. Despite the signing this September of a ceasefire agreement between the Ukrainian government and pro-Russian separatists in Minsk, both sides accuse each other of shelling and gunfights in the east, and Ukrainian soldiers and civilians have continued to die.

Before the fighting started six months ago, small groups of Meskhetian Turks, no more than fifteen families in the span of five years, trickled out of Ukraine for Turkey, according to Vatan, the international organization advocating for their repatriation (it translates as “homeland” in Turkish). Over the last year, that number has jumped to at least 300 people, its Ukrainian head, Marat Rasulov, told me in Kiev. When not running his Turkish timber export firm, he is busy securing pledges of support from the Turkish diaspora, to rebuild homes destroyed by the conflict. Meskhetian Turks can be found in far-flung places. From 1989, they started to spread around the world: to Russia, Turkey, and even the United States, which gave citizenship to 10,000 refugees a decade ago (They had been living in Russia for fifteen years without legal status). Today, around a quarter of them have a tightknit community in Dayton, Ohio.

Most of those seeking new lives in Turkey come from in and around Sloviansk in the insurgency-plagued Donetsk region in eastern Ukraine. Once the epicenter of the war, Sloviansk was liberated in July by Ukrainian forces, ending a three-month separatist siege. The jagged, blown out windows and charred entrances of apartment buildings bear haunting reminders of mortar and artillery fire. Nasiba Mirzayeva, 48, sits outside what is left of her home in the village of Semenovka just outside Sloviansk. Its dirt roads are littered with the debris of war—shell fragments and abandoned toys—and are devoid of people, making it ghostlike. Mirzayeva holds a dented gallon-sized water bottle close to her chest, which she reheats on a fire to keep warm at night. Her house is sprayed in bullet holes, and missing its doors. Despite her physical discomfort, she speaks with a sense of self-preservation. “There’s no coal, no electricity, no water. How are we going to survive the winter?” she asks me in accented Russian, typical of Meskhetian Turkish women who often marry young and receive less education than men. Her neighbors on both sides, like dozens of families in Semenovka, left for the Turkish city of Bursa in late summer. Mirzayeva’s own children are in Russia. “They’re waiting it out,” she says. 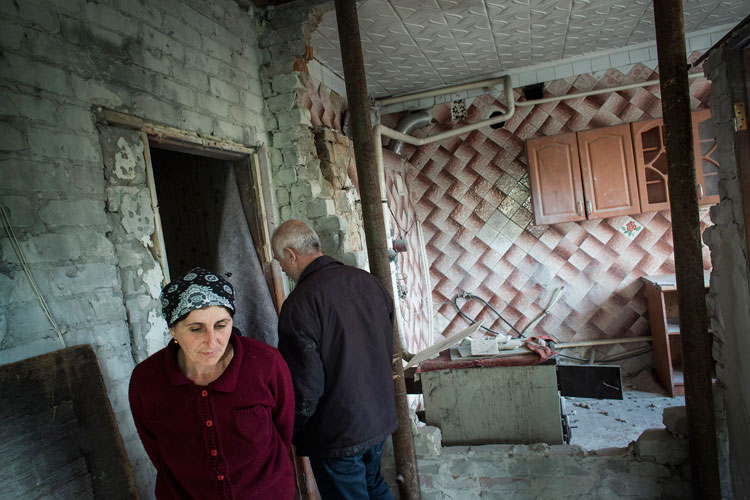 Nasiba Mirzayeva and her husband Vakhid near Sloviansk in Semenovka, in what is left of their living room and kitchen. 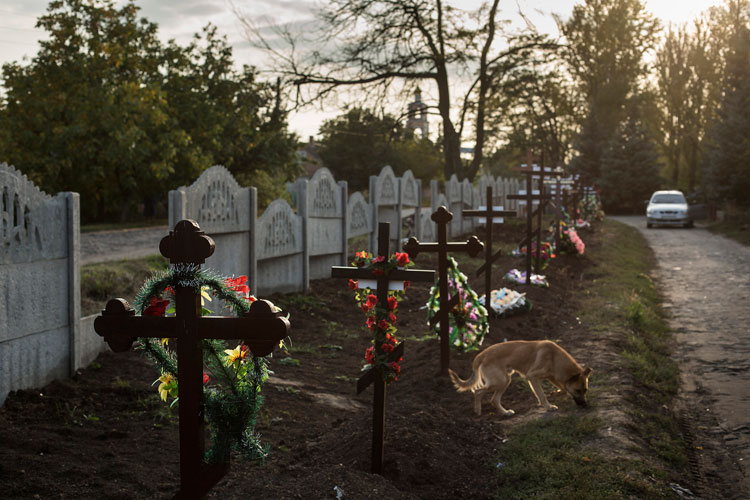 On November 14, Meskhetian Turks around the globe will mark seventy years since the day their deportation began. The bitter irony of the timing is not lost on the Turks, whose collective suffering only strengthened their sense of identity. “How could a third misfortune befall us already?” asks Kherson’s Imam Qasim Mukhamedov, a gaunt man in a knitted green skull cap. The city near the Black Sea is home to the largest Ukrainian population of Turks—some 5,000—having lured them with its horizon-touching black fertile earth. Mukhamedov talks to me in the city’s small Turkish mosque, where some men have gathered for Koran reading on the brightly lit crimson carpets of its prayer hall.  Pamphlets on the story of Islam, in both Russian and Turkish, are splayed on wooden tables inside.

“I’m a typical Meskhetian Turk,” Mukhamedov says in a preaching lilt, occasionally touching his young beard. “My father was born in Georgia, I in Uzbekistan, and my three children in Ukraine. Assimilation happens, but of course we all want to return home.” Moscow maintains that in June of 1989, when interethnic violence between Uzbeks and Turks broke out leaving 100 Turks dead, it intervened to swiftly “evacuate” 17,000 from the Fergana Valley to western Russia.  The rest, some 70,000 people, quickly left for other parts of the Soviet Union, before they could make arrangements to sell their homes. These include the 8,500 that today live in Ukraine.

The community’s deep connection to Turkey is immensely touching, perhaps especially so as Turkey does little to acknowledge them. In Turkish, if they are spoken of at all, they are called Ahiska, which refers to an historical term for the area between present-day Georgia and eastern Anatolia. “When I first went to Turkey,” says Vatan’s Rasulov, who studied in a Turkish university in the late nineties, “no one understood who I was or where I was from. They thought I said I was from Alaska.”

Being Sunni Muslims with no linguistic link to heavily Christian Georgia, few of the Turks feel a connection to Tbilisi. “Georgia isn’t really our homeland as it was part of the Ottoman Empire,” Imam Mukhamedov says. It is equally hard to place them in Kherson, a leafy city of spectacular Soviet decay where drunks and stray dogs roam the streets in pairs. Just sixty miles northwest of Crimea, now the beginning of Ukraine’s new international border with Russia—the peninsula was annexed by Moscow in March—there is a growing sense of unease. The lines of food and gas trucks crossing into Crimea are getting longer as checks become more arduous, while Russian armored personnel carriers make occasional infringements, spooking locals. 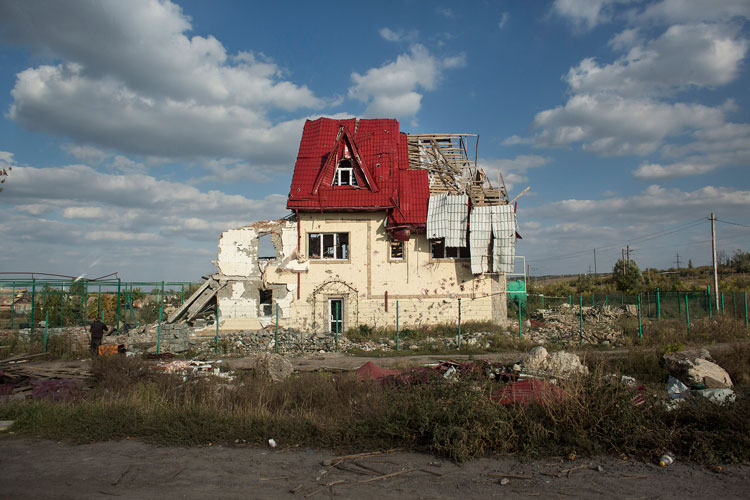 A shop destroyed by fighting by the village of Semenovka, near Sloviansk 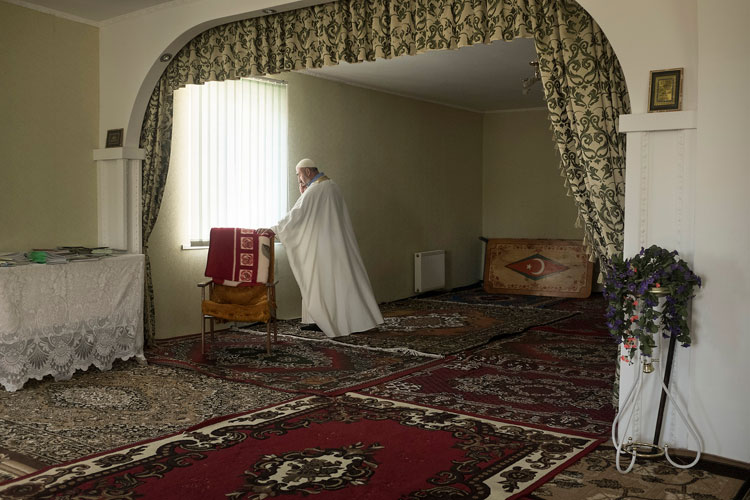 Imam Ibragim Shukurov in his mosque in the village of Krestovka, near Kherson.

Vatan is planning a somber ceremony for the seventieth anniversary in Kherson, with the hope it will attract attention to their plight. “We want the world to help us, we want Europe to help us. The most important, the most sacred thing to us, is to go home,” sixty-four-year-old Zakhadin Aslanov, its Kherson representative, tells me after Friday prayers in his home in the village of Krestovka. Jolly and broad-shouldered with a bottom row of golden teeth, Aslanov’s life has been defined by the deportation. He was orphaned soon after, when both his parents died from illnesses connected to the journey. Out of the nine children he had with his wife Asamat, only three survived to adulthood. “We will show how a nation lives without their homeland, how we suffered, how we feel the pain of our ancestors,” he says as Asamat serves up oily fried eggs from a rudimentary wood-fired stove. The tumbledown village is entirely populated by Meskhetian Turks, making its Soviet setting feel strangely out of place. Turkish TV is piped by satellite into many of the homes, which are without indoor plumbing. An abandoned grain mill sits near the tiny mosque on Gagarin Street, where chickens and the occasional cow amble past. Unlike other Turks in Ukraine, including their own children, the Aslanovs have not caught a glimpse of their homeland. Their eight-year-old granddaughter Belora comes into the room, where we are seated on flat cushions, to show off her toy bear. She speaks to her grandfather in Ukrainian, making him grimace. “See what is happening here?” he asks me, bemused. “Seventy years will soon become one hundred, and we’ll stop being Turkish all together.”

Amie Ferris-Rotman is a journalist based in London.

Joel van Houdt is an independent photojournalist based in Kabul, Afghanistan.

Reporting for this article was supported by a grant from the International Reporting Project. All photographs ©Joel van Houdt.

Opinion by Ahmed Hezam
How the Khashoggi Case Plays in Yemen
videos by Franco Galdini
Moscow's Little Kyrgyzstan
Reportage by Betsy Joles
City Beyond Refuge: Journeys Suspended in Istanbul
Opinion by Ikram Ullah
A Century in Defiance
blog by Deniz Ay
Insurgent citizenship on the 3rd anniversary of the Gezi Park protests
blog by Melissa Rodriguez
UN report: Syrian government is exterminating its own people
videos by Preethi Nallu
Afghan refugees suffer from perils of "post-conflict"
blog by Ilya Budraitskis
Gilbert Achcar on the Russian military operation in Syria
Opinion by Gareth Davies
Ukraine's Cultural Backlash: 38 Books Banned
blog by Marion Pineau
Maidan: A Revolution in a Hundred Portraits
Like any of the articles? Support our work.
Donate Now