Quinoa currently fetches as much as $3,200 a ton, up nearly threefold from five years ago – a surge fed by "foodies" making quinoa a hot health-food product based on its high content of protein and amino acids. It's also gluten-free. Though used like a grain, quinoa is actually an edible seed.

The United Nations has designated 2013 as the International Year of Quinoa, and Bolivian President Evo Morales celebrated it in New York Wednesday along with Peru's first lady, Nadine Heredia. Their countries are the world's two biggest producers.

The U.N. Food and Agriculture Organization believes quinoa can make an important contribution to global food security and fighting hunger.

"Quinoa can grow if very diverse climactic and environmental conditions, including climates with very little rainfall. And that's especially important on a planet that is warming where desertification and the erosion are more pressing than ever," U.N. Secretary General Ban Ki-Moon said in New York. 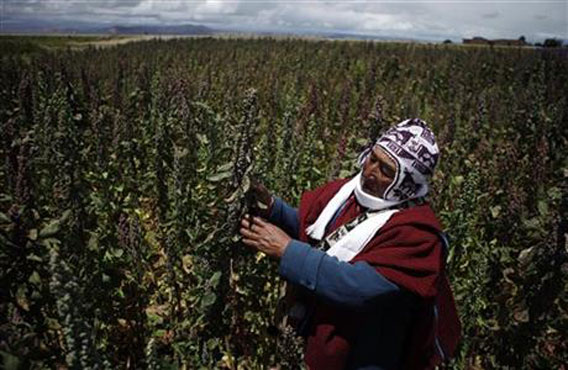 Quinoa has been cultivated in the Andean highlands since at least 3000 B.C., growing natively from Chile north to Colombia. It grows best at high altitudes in climates with cool days and even cooler nights.

In December, Morales mounted a tractor and plowed furrows into the soil of his highlands hometown, Orinoca, to promote quinoa as sowing season got under way. Townspeople sacrificed a llama to ask Pachamama, or Mother Earth, for a good harvest.

But last week, Morales was out chastising farmers for having planted quinoa in pastures where llamas traditionally graze. Without the llamas' manure, little would grow in the arid highlands more than two miles (three kilometers) high where the most prized variety of quinoa originates.

"Quinoa goes hand in hand with the natural fertilizer that llamas produce and there must be a nutritional crossing between the two," said Rossmary Jaldin, an expert in the crop.

Bolivia's deputy minister of rural development, Victor Hugo Vasquez, said 30 percent of his country's 70,000 quinoa producers are now children of peasants who left the farm but have been drawn back by high quinoa prices.

He and the president of Bolivia's National Association of Quinoa Producers, Juan Crispin, say many of the growers don't follow traditional farming methods and are depleting soils because they don't rotate crops.

Morales' government declared quinoa a strategic priority two years ago and has since disbursed $10 million in credits for increasing yields to cash in on the boom.

The United States imports 52 percent of Bolivian quinoa while 24 percent goes to Europe, where France and the Netherlands are big buyers.

Their gains have caught the attention of potential competitors. Farmers are beginning to plant quinoa in other countries, including Canada, Australia, China, India and Paraguay. A few thousand acres are harvested in a highland valley of the U.S. state of Colorado and also in Minnesota.

Bolivian farmers are complaining to their government that they need harvesting machinery since most of their quinoa is harvested by hand. Morales' administration has invited South Korean engineers to design the desired machines. 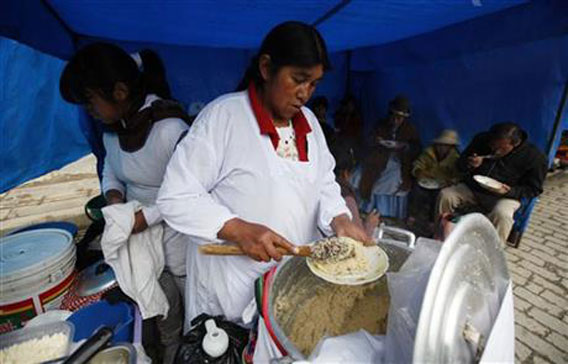 In this Feb. 17, 2013 photo, a woman serves pesque, a traditional Andean plate made of cooked quinoa with cheese and milk at a street market in El Alto, Bolivia. A burgeoning global demand for quinoa is spurring new cultivation all across Bolivia's western highlands as prices for the Andean "super grain" soar. But agronomists say quinoa fever is running up against physical limits. Quinoa does not lend itself to industrial-scale production and the rush to increase yields is prompting Bolivian growers to abandon traditional agricultural practices, thus endangering the fragile highlands' ecosystem. Bolivia's President Evo Morales will attend a U.N. event on Feb. 20 declaring 2013 the International Year of Quinoa. (AP Photo/Juan Karita)

Duane Johnson, a former Colorado state agronomist who helped introduce quinoa to the United States three decades ago, said quinoa can be commercially planted and harvested just like grain.

"It's just the size of millet," said Johnson, who now lives in Bigfork, Montana. "I think the problem you get into in South America is getting enough land to justify a combine."

When he was growing quinoa in the late 1980s, the United States accounted for 37 percent of the world's quinoa crop, Johnson said. Today, it has about 2 percent, he said.

Environmental concerns about the expansion of quinoa in Bolivia aren't the only problems that experts see.

Near Lake Titicaca, in some of the highlands' most fertile soils, quinoa is now showing up where it hadn't before been planted, replacing potatoes, beans and oats in some fields.

Experts fear that trend could harm food stocks in this poor nation where one in five children suffers from chronic malnutrition.

And with quinoa now costing three times as much as rice in La Paz markets, it isn't eaten much by Bolivians. Its consumption averages a little more than a kilogram, (2.2 pounds) per year for each Bolivian.

The U.N. Food and Agriculture Organization hopes to promote more use of quinoa at home by promoting the serving of quinoa in subsidized school breakfasts.

Morales said at U.N. headquarters Wednesday that "it's not true that due to an increase in the price of quinoa less and less is being consumed" in Bolivia.

Domestic consumption is actually up threefold in the past four years, he said, to 12,000 metric tons.

Reprinted with permission of the Associated Press

podcast by Mary von Aue
Making the most of a disappearing space: Fair trade for Palestinian farmers
Literature by Devin Kelly
When Even the Living Are Lost: A Meditation on My Time at Arlington Cemetery
Conversations by Matthew Schum
Image Decomposed: Alfredo Jaar’s May 1, 2011
Opinion by Kristofer Petersen-Overton
Torture and Moral Vision
blog by Naomi Dann
Palestinian Audacity: The PA's bid to join the International Criminal Court
blog by Jason Huettner
#TortureReport and the Media Circus
blog by Andrew Ryder
Disciplinary Power in Ferguson and Palestine
retrospectives by Fayeq Oweis & Susan Greene
A Palestinian Cultural Mural
retrospectives by shared by The Palestinian Museum
Edward Said, Out of Place
retrospectives by Lecture by Edward Said
The Myth of the Clash of Civilzations
Like any of the articles? Support our work.
Donate Now