For anyone who hasn't been paying attention for the past ten years, or even the past two, here is where we stand on the decline of "traditional media": Instead of consuming the nightly news at 6 or 10 p.m. on broadcast television or reading the print local daily newspaper with coffee each morning, news consumers are now immersed in what media entrepreneur Rory O' Connor calls "The Daily Me." That means news is delivered the way individual consumers want it, when they want in a 24/7 news cycle, and the stratification of news has unraveled the media ecosystem. Circulation is down at most daily newspapers and the inability for brands to earn money through advertising has led to layoffs, buyouts and newspapers like the New Orleans Times-Picayune discontinuing print coverage altogether on some days to save on costs.

O'Connor, the cofounder of the independent media company Globalvision, writes in Friends, Followers and The Future: How Social Media are Changing Politics, Threatening Big Brands, and Killing Traditional Media that the Daily Me has yielded information silos fueled by Really Simple Syndication feeds, blogs, Facebook and Twitter.

O'Connor's book is a modern history lesson on how social media has changed journalism and politics, for better or worse. Whereas the parents of this generation had a limited selection of news channels and only a few ways to get their news, now, news consumers can get their information with a side of humor courtesy of The Daily Show with Jon Stewart. Instead of waiting on Diane Sawyer or Matt Lauer to explain a news event, most people get their news from Twitter and Facebook feeds.

The ramifications are that when portals like Facebook offer up news, they are also filtering out alternative points of view through their personalization of the feed.

Instead of relying on news brands and individual journalist brands like the days of Walter Cronkite or Bob Woodward and Carl Bernstein, our current media information landscape tosses a steady stream of information in 140 characters or in the advertising/privacy-busting mashup of a social networking site and forces consumers to sift through it to determine accuracy and relevance. "Journalists are needed today for the work they do as much as they ever have been. While the wisdom of crowds might provide a new form of fact checking, and the ubiquity of technology might provide a more robust view of the news, citizens desperately need the Fourth Estate to provide depth, context and analysis." 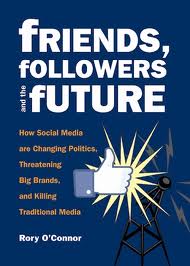 There is almost no area where the need for such things will remain as significant as politics. O'Connor begins with a description of political protest:

"On December 17, 2010, a young Tunisian street vendor named Mohamed Bouazizi set himself afire. Within months, much of the Arab world was ablaze as well. Bouazizi's fatal self-immolation sparked what later became known as the Arab Spring and led to the demise of dictators not only in his country, but in neighboring Egypt and Libya as well."

The crowdsourcing and citizen journalism created by social networkers around the world often scooped traditional media, many of which have closed international bureaus in cost-cutting measures.

"Why are people all over the world coming to similar conclusions and taking to the streets all at once to express them?" O'Connor writes. "The answer should be obvious: they feel their social systems have abandoned them. As a result, citizens of all ages, but especially young people, are throwing off old-style, top-down constructs like political parties, traditional media and corporate brands to adopt instead the more participatory and far less hierarchical ways of the Web."

This kind of bottom up approach to news - from the trenches first, then with analysis from news organizations when they can catch up - was also evident during major news events like Occupy Wall Street, Hurricane Sandy and the Presidential Elections of 2008 and 2012. Social media offers the democratization of the Internet, a mobilizing tool for regular folks without gatekeepers.

That's good news for politicians and marketers. In fact, campaigns without social media will be unheard of in our future. Barack Obama's use of the web has proven that and the subsequent response of the Tea Party and Republicans to using social media for their messaging only cements that fact.

But O'Connor points out that there are some pitfalls to consider when viewing social media as news. The diminished dependence on legacy media comes with the unstated but assumed cost of not knowing the veracity of the information floating around online. Personalized news feeds block out alternative viewpoints unless readers work to seek those out. The very definition of news is changed - much like the definition of friend or follower - by the nature and ubiquity of social media.

Without gatekeepers or filters, without a brand that consumers can rely on, what will be the definition of journalism in the future? What will it mean for politics? Are we destined to have our friends report to us - and us to them - what constitutes news? Is that enough?

As one of O'Connor's sources says, "The Internet is revolutionary, but it is not a revolution." For news and politics, though, that statement may continue to read as more of a rhetorical question than a fact.

J. Victoria Sanders has been a writer and journalist for over fifteen years. Her writing has appeared in Bitch Magazine, The UTNE Reader, Publishers Weekly, The San Francisco Chronicle, The Dallas Morning News and The Austin American-Statesman. Her work has been widely anthologized and her publication credits include Homelands: Women’s Journeys Across Race, Place and Time; Quiet Storm: Voices of Young Black Poets; Madonna and Me; and the forthcoming Seal Press anthology Beyond Belief: The Secret Lives of Women in Extreme Religion.  She just completed her first book, Single & Happy, which will be published in 2013. She is a Bronx native living in Austin, TX. She blogs atwww.jvictoriasanders.com and at http://partyofones.com

Friends, Followers and the Future: How Social M...
Paperback
$14.45
Buy from amazon.com