A Day of Creativity for Ashraf Fayadh

Asmaa Azaizeh and Ala Azzam perform the poem "A Hoarseness in the River's Flow" by Ashraf Fayadh, translated by Mona Kareem below. 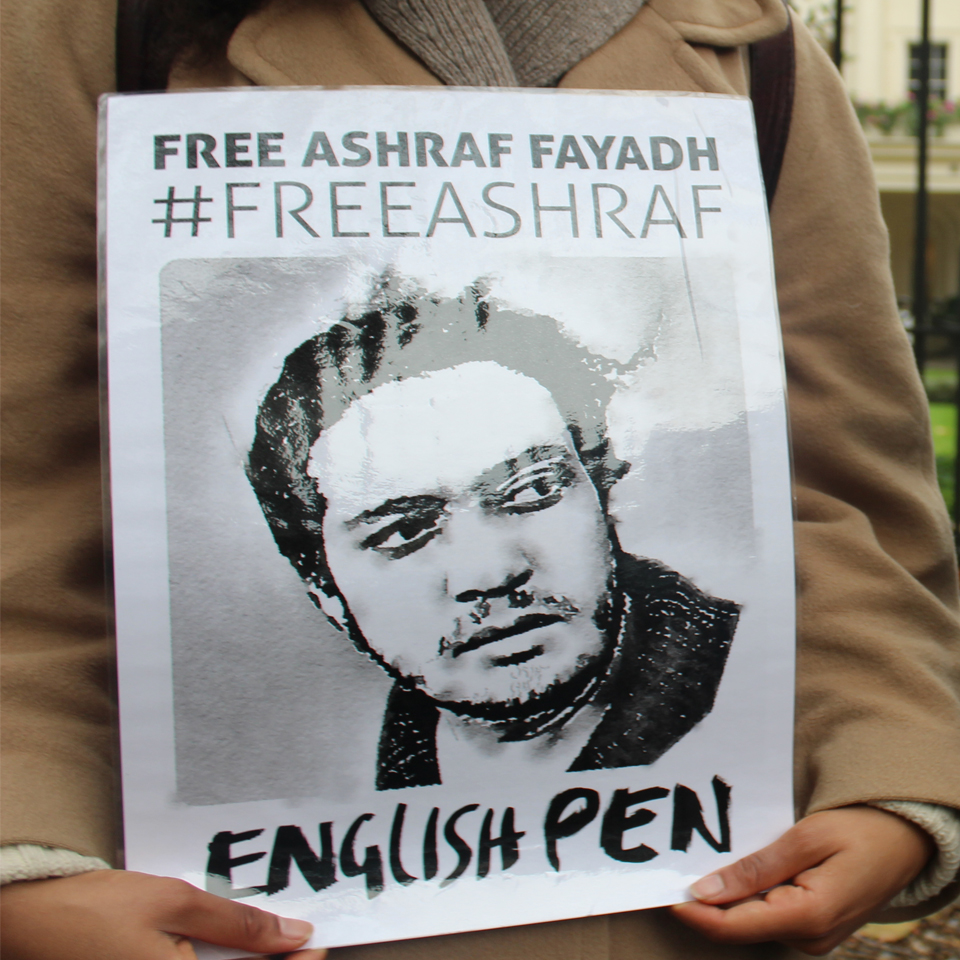 It's been nearly three years since Palestinian poet Ashraf Fayadh -- who was born and raised in Saudi Arabia -- was detained by the religious police in August 2013. He was accused of cursing God, insulting Saudi Arabia, and distributing a book of his poetry: Instructions Within.

Fayadh has said the complaint arose from a personal dispute during a discussion in a cafe, one that playwright Hassan Abdulrazzak has satirized in "The Several Beheadings of Ashraf Fayadh." In Abdulrazzak's play, an unnamed man sneers, "We gave you refuge. We gave you a home. And how do you repay this kindness? You hand out filthy literature to our youth."

But this escalated into serious charges against Fayadh, for alleged apostasy in his painful, relentless, densely nested poems. It matters that the poems are powerful. That there is a critique embedded here that authorities almost but cannot quite grasp.

The poet was sentenced to death last November, prompting worldwide protests and solidarity readings. His death sentence was repealed in February and he was resentenced to eight years and 800 lashes.

But he remains in prison. Locked in, away from the light. Today, along with others around the world, we again remember so as not to let him be forgotten in prison. We translate him, we write with him, alongside him, and to him, create art to continue on the paths that he's illuminated.
-- Marcia Lynx Qualey

A Hoarseness in the River’s Flow

On the banks of a dirty river
some boys make a circle
“I drowned just now…it’s the game of death...”
The Tigris is swallowing death
making its way to the doomed Gulf

“Embrace life to win”
I hear a hoarseness in my left ear
in my veins
and in the river, cloud,
in my heart too

The sweet girl did not rise today
neither did the bread
it’s okay
the crows had stopped laying their eggs on my ceiling.
So keep your white smile…for a black day!

The dirty river returns to sing
but the hoarseness in my voice doesn’t let it
It is a banal song…
the river’s cracking voice eats away my patience!
“the river has a Baghdad to protect it”
and the heart has forgetfulness!

One official stated:
“Take hold of what’s left of life
for the nights of time are not equal”
Note:
this is an official of the heart militias

The river has gotten so dirty
some comments float on the news;
one analysis after another.
- what about fashion news?
- what do you think of the Baghdad collective?

Wash out your desire with the river’s cold water
then cross towards your lascivious lover
for the darkness is intense.
Although the night was made for clothing,
the river went naked!

How are you gonna drink your tea?
The river has eaten death,
chewing on defeat in his journey
towards Basra

Defeat is spreading out
settling in my throat

Between the satire of Hajaj
and the novelties of Banipal,
do not close your eyes
the shame of heavenly water was unveiled
and made familiar once again

Tell your mother
not to wash your dress;
the river is dirty
colonized by the wretchedness of death.
Another question:
Can we use the river to water flowers?

You were told: settle there…
but some of you are enemies for all
so leave it now
Then look up to yourselves from the bottom of the river;
those of you on top should have some pity for those beneath…
the displaced are helpless,
like blood in the oil market that no one wants to buy!

I am the worshipped river
I am the most worthless idol
and you are shapeless statutes
disputing over the bosom,
over a bad drink and rotten tobacco
and press reports
on the banal voting chairs in the Basra night.

Abduljabbar is about to return home
and the waiter will take care of resetting the domino
and of filtering from our ears
that hoarseness in the river’s flow,
and of news broadcasts.

* This poem was originally published in Ashraf’s poetry collection back in 2008. The English version will appear in Kareem’s forthcoming translation Instructions Within by The Operating System Press.