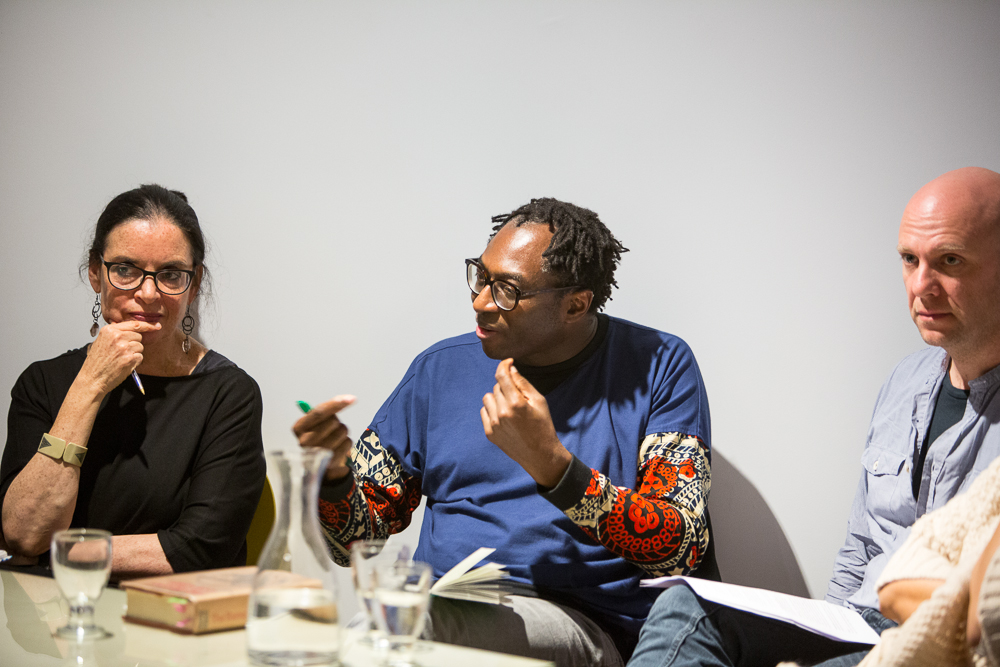 The discussion contextualized the artists’ In the Year of the Quiet Sun, a video essay on the visual culture and politics of decolonization and Pan-Africanism in the 1950s and 60s. The film follows a series of events from the 1955 Bandung Conference to the Tricontinental Conference in 1966. It is entirely composed of found material, including archival footage, scanned and magnified postage stamps and color washes, set to distorted national anthems and ominous music. It explores the role of the Inter-Governmental Philatelic Corporation (IGPC), a private agency founded in New York to design and market postage stamps and run the postal systems of many newly independent states. IGPC’s first client was Ghana, after the country declared independence in 1957. The film draws heavily on Ghanaian politics due to Ghanain leader and thinker Kwame Nkrumah’s critical role to Pan-Africanism and the Non-Aligned Movement, and as an entry-point into the politics of postage stamps.

The film’s title refers to the International Quiet Sun Year (November 1964-November 1965), which was a calm period of the 11-year solar cycle that enabled scientists to observe the sun’s surface and its planetary effects. Many governments commemorated the year with official postage stamps designed by IGPC and its team of illustrators.

For Otolith, the astronomical phenomenon coincided with an era of Pan-Africanist summits, political upheaval and military coups that occurred across the continent. Despite political divisions between African countries, the IGPC created a common Pop art aesthetic during the Cold War. The stamps form part of the visual culture of decolonization and Pan-African history, and their celestial focus is a metaphor for the failed promise of African liberation on the ground. The philatelic illustrators were, in effect, visual designers for nascent nationalism and the strongman politics that came after. “Stamps have to reduce big moments into icons….they reflect power—only states can issue them,” said Eshun.

In 1964, Ghana’s President Nkrumah declared the country to be a one-party state. Nkrumah was subsequently overthrown in a military coup in 1966, which exposed the societal divisions and authoritarian politics that have parallels in other African countries post-independence. The Ghanaian stamps issued for Republic Day and Founder’s Day served as tools for nationalist politics and Nkrumah’s cult of personality. For Garb, “[they reveal] the mimicry and recapitulation of power structures.” Newly independent African states began to look and function like their colonial predecessors.

In the Year of the Quiet Sun concludes with a poignant quotation from Fanon’s Toward the African Revolution, declaring, ”But the sun is still very high in the heavens and if one listens with one ear glued to the red earth one very distinctly hears the sound of rusty chains, groans of distress, and the bruised flesh is so constantly present in this stifling noonday that one’s shoulders droop with the weight of it.”

Feature image of  In the Year of the Quiet Sun, 2013, Photo courtesy of Delfina Foundation, Tim Bowditch.