There’s no images of the separation wall in Chapter 31: An Exhibition About the Future of Palestine. Depictions of grim concrete checkpoints are almost entirely absent from the London exhibition; scenes of riots or protests are gone, and there’s barely a hint of the red, green, black and white that make up the Palestinian flag. The familiar signifiers that in Europe and America have come to symbolize Palestine are missing.

Here, things less tangible than flags and fences tell the story. In “Eltifaf Number 13”, an ominous acrylic by Rafat Asad, familiar hills between Ramallah and Nablus in the West Bank are obscured almost entirely by a hulking black billboard. A white car appears in a landscape by Alaa Abu Asad, then is seen disappearing without explanation in the next frame, a sequence followed by empty buildings, women with their backs turned, and genderless figures with their heads covered with sheets.

“This menace was omnipresent but never explicitly referenced,” Nadia Jaglom, the exhibition's co-curator and founding member of the Sarha Collective, said. “Those are so many of the forms, the symbols and motifs that come to embody the oppression, the colonizations of the Palestinian people... The aftershock, the ramifications, the infrastructure, the network is so much more far-reaching that the obvious symbols of the soldier and the walls and the settlement.”

It can be unusual for audiences, especially outside of the Middle East, to be confronted with the more insidious reality of what is happening in Palestine. But this is the very thing Chapter 31 attempts to explore. It’s not a task undertaken easily: the works in the exhibition do not follow a clear narrative of liberation or document the concrete oppressions of military occupation, but rather hint towards omnipresent menaces that rarely appear themselves. The white car in Alaa Abu Asad’s photographs – a strange appearance in a familiar landscape that could be malevolent or benign – embodies the sense of surveillance and entrapment that lurks around many of the exhibition’s pieces. It's a frightening sense of dread that rears it head in the security cameras dotted about the galleries, and in the wire figures of Anas al Barbarawi who, in the exhibition's final piece, reach up towards a man holding a moon they cannot reach. In Yazan Khalil’s short film, Hiding Our Faces Like the Dancing Wind, a woman attempts to thwart the functioning of facial recognition technology on her own features, appearing to generate, as she does, images of colonial masks. Though sometimes the dread feels obvious, everywhere there’s the unsettling feeling of being seen when you don’t want to be, of boundaries and identity being shaped in a way that’s out of personal control.

“We wanted to show what is manifested on so many levels other than that of extreme physical violence, or the fear of extreme physical violence,” Jaglom explained. Many of the pieces, she said, are depictions of a subtle violence that's surprising to audiences: they're meant to be more dystopian imaginings of the future, but are close to what is already a present reality for many Palestinians. “We wanted to show how close these horrific, dystopian, Orwellian visions of the future were, that they exist, and they if things continued they're only going to get worse,” Jaglom continued.

The same can be said of the second half of Chapter 31, the Utopia to a Dystopian flip side. The seemingly more hopeful works find themselves unable to stray far from the relentless reality of the Palestinian present. In “Evening Ennui with Mum on a Rainy Sunday”, an older woman reads a revolutionary newspaper while a younger man, with his face hidden, lies prone, looking upwards on her lap. Photographer Alaa Abu Asad, whose work also appears in the Dystopian half of Chapter 31, has described the piece as a memento mori, and his pair give a sense of a young force spent, outlasted by a steadfast, matriarchal figure that’s endured more silently than her son. In “Girl with Parachute” by Abdulrahman Katanani, a girl is shown in flight, or falling, and both the child and her parachute are made from tin sidings that make up the roofs of refugee camps. In both pieces, the imaginings of a more hopeful future are tightly bound up with the material reality of the present: the future of Palestine is the here and now.

But it's not just the future of Palestine that's a concern here. One of the more arresting aspects of the exhibition is the nagging feeling that the sinister unseen influences, the fears of surveillance, of being trapped by present circumstances, are much closer to the UK than audiences might expect. It's an unsettling similarity: co-curator Mai Kanaaneh describes it as frightening, with special ramifications for a world in which mass displacement, too, is an imminent concern. “In the dystopian floor all the things that you see are not only in Palestine, they’re things that need to be dealt with and tackled here,” she said. “You can’t be ‘othering'.”

Still, the relevance to other circumstances is limited. Today, experience for Palestinians is particular but not unified: the population is living in vastly different circumstances, a fact represented well by a diversity of artists, their works clearly shaped by unique contexts, in Chapter 31. Amjad Ghannam's painting carries the weight of his time as a political prisoner; Al Barbarawi grew up in a Jordanian refugee camp and his work takes aim at the aid economies there, while Damascus-based Ayham Jabr has been forced to cut and arrange his collages entirely by hand. The huge differences between Palestinians’ experiences is something Nadia and Mai felt was overlooked in the picture presented by a desire for a unified Palestinian narrative, especially in international solidarity activism. 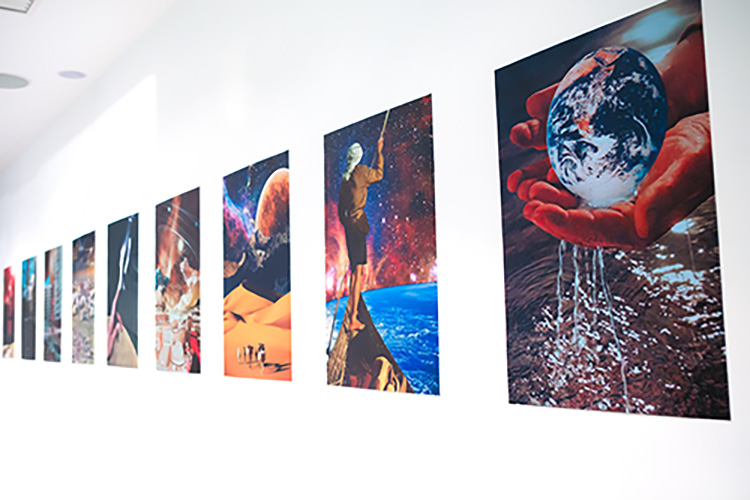 But there are still some ideas that recur again and again. Among them is a feeling of stasis: the sense, familiar to many Palestinians, of being unable to move forward, trapped by present conditions and powers beyond individual control. It's a feeling that creates a kind of timelessness, that makes imagining the future a difficult task. It's striking that the only work in the exhibition that materially considers what a future Palestine might look like – complete with a university in the south, a rail network, and cities expanded to accommodate refugees – is Leopold Lambert's “Excavated Artists from a Post-Apartheid Palestine” – one of the only pieces by a non-Palestinian artist.

In creating the exhibition, Jaglom and Kanaaneh say, the Sarha Collective hoped to open discussions about what might be “conceivably envisaged” as a Palestinian future. But the question of what this future might be is answered only by unsettling echoes of the present: a present that's dark, populated with oppressions, frustrations and anxieties that are difficult to quantify or grasp, where people are controlled and trapped, watched against their will and reaching for things that seem just out of reach. It's a frightening place. But it's an honest confrontation of what the future of Palestine actually means for those living it today.

Bethan Staton is an independent journalist based in the Middle East. She's reported from Egypt, Jordan, Palestine and Israel, Turkey and the UK for various outlets, including the Guardian, New Statesman, Al Jazeera and Quartz. Twitter @bthsts.