Last month a video surfaced online of Pakistan army officers in the country's Federally Administered Tribal Areas (FATA) that caused outrage on social media. In the video, army men look on as a fellow soldier, dressed up in Pashtun women's cultural clothing, does a caricature of a dance. This attempt to get some entertainment at the expense of others was to many an insult added to the many injuries FATA and its people have endured throughout the years.

Pakistan's so-called Tribal Areas, for the past decade and a half a front line in the global "War on Terror," have most recently been subjected to the full force of the Pakistan army's guns, tanks and bombs as part of operations aimed at clearing the region of militants. The flagship operation, named Zarb-e-Azb, began in North Waziristan in mid-2014 but military action has spread throughout other agencies in FATA in the months since. At the same time, obtaining information on the situation in FATA is increasingly difficult; on top of the army's obfuscations and barriers to entry into FATA, the tribal journalists who would serve as a much-needed source of on-the-ground reporting must work in dangerous conditions and at risk to their lives. Many have been targeted and killed, like journalist and human rights activist Mohammad Zaman Mehsud.

The people of FATA themselves must struggle to make their demands known in a system designed to exclude them from the national political fabric. There is no representative government in the FATA agencies, which are instead subject to the effective authoritarian rule of Political Agents beholden to the authority of the central government alone. Adult franchise was only introduced in the region in 1996 for the purpose of elections to the National Assembly, but political parties were not allowed. Furthermore, thanks to Article 247 of the Pakistani Constitution, the writ of the Supreme Court and High Courts do not extend to FATA, forcing people to make due with officially sanctioned yet corrupt 'tribal jirgas' to settle disputes. In fact, no laws passed in the National Assembly apply to the tribal agencies without the express consent of the central government.

Instead, FATA is largely governed under the extremely repressive Frontier Crimes Regulation (FCR), itself a product of British colonial rule. Under the guise of governance attentive to "tribal traditions," the FCR legitimizes the collective punishment of entire villages and tribes, including collective imposition of fines and arrests of people by virtue of their tribal relation with an accused criminal pursued by the authorities. It institutionalizes corruption and repression of common people by elevating artificial leaders, the Maliks, to positions of authority. Add to this a violent insurgency and an equally violent military occupation led by a security establishment that covertly supports the same militants it claims to be 'clearing' from the land, and it's not difficult to see why this latest video struck a nerve.

In response to the video, people on Twitter started a hashtag called #SlavesofFATA to air their grievances against the army and the constant injustices FATA's residents suffer. The complaints voice discontent with the military’s lack of accountability, the social and economic destruction of FATA, and the racialized thinking that is used to justify policies like the FCR. 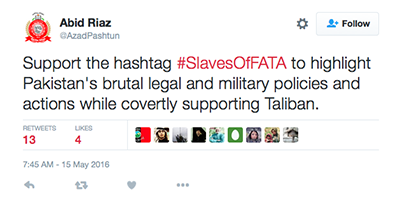 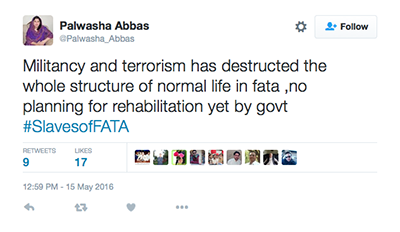 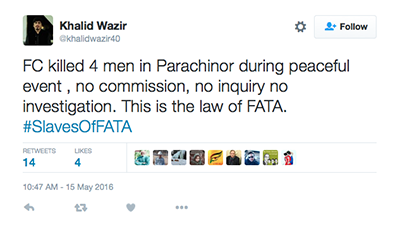 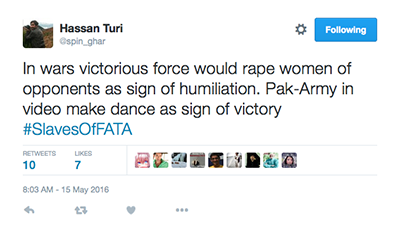 However, the nature of dissent on the hashtag is not uniform-- some question the idea that FATA would be any better off if they were granted the constitutional rights (theoretically) enjoyed by Pakistanis in the central provinces. 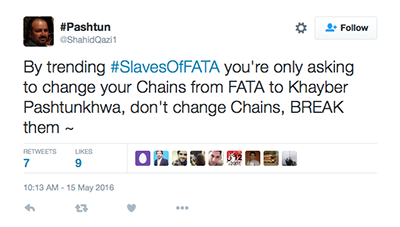 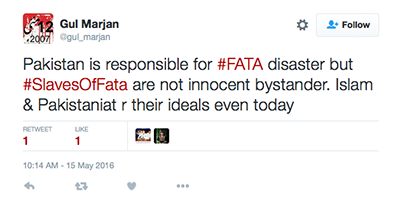 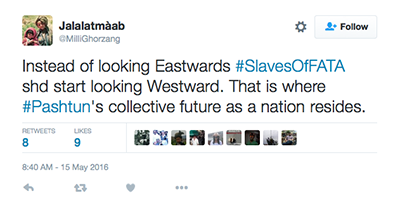 According to Saleem Mehsud, the outrage over the video evolved from a social media campaign to organized protest on 19 May.

#SlavesOfFATA is compelling in the way it has amplified the criticisms too often neglected in mainstream media, both in Pakistan and abroad, but also for its exposure of the variety of viewpoints of those enraged by the oppression meted out to FATA's people in the name of anti-terrorism. Will the government respond to their demands?

If recent history is any indicator, such an outcome is highly unlikely, even as the government has made half-hearted noises about FCR reform in recent years after increased pressure. Nevertheless, it is encouraging to see coordinated attempts at online activism making a mark on social media, and one hopes further efforts like this will afford those fighting for justice in FATA a creative means to subvert their forcible silencing by the government and security forces.

Nooreen Reza is an MPhil Candidate in Modern South Asian Studies at the University of Cambridge. Her other work has been published in Kajal Magazine, The Yale Globalist, and Film Matters. She also contributes to intolerancetracker.com, an ongoing effort to map instances of intolerance across South Asia started by students at the University of Cambridge.

Reportage by Steven Herran
Social Media State: Crushing Colombia's "Cacerolazo"
column by Esther A. Armah
BEWARE! Statementism and Tweak-o-nomics
Reviews by Nirupa Umapathy
The War on Terror Goes on Trial
Opinion by Deepali Srivastava
Liberation in Tradition: Lahore Literary Festival in New York
Conversations by Gabrielle Spear
Iraq 2103: Sci-fi Against Empire
Conversations by Deddahi Ould Abdallahi
The Guantánamo Diarist's Hometown Tormentor
Opinion by Ikram Ullah
A Century in Defiance
blog by Kashmir Scholars Action Group
Open Letter to the UN High Commissioner for Human Rights
Reviews by Gareth Davies
The Confession: Living the War on Terror
Conversations by Masarat Alam
Beyond the Killing in Kashmir
Like any of the articles? Support our work.
Donate Now