In a group exhibition at Toronto’s Power Plant art gallery, perspectives on Western imperialism and their uncomfortable legacies come to the fore. The Unfinished Conversation: Encoding/Decoding, on display until May 18th, uses Stuart Hall’s communication theory to highlight contested histories and the distortion of narratives and meanings by personal interpretation.

Gallery visitors encounter distinct rooms for each artist, with little guidance on how their art works together. Each work is decidedly political in its focus on the Cold War and anti-imperialism, but whose messages and meanings are left open. Their lack of obvious cohesion suggests a praxis-based approach to Hall’s theory: audiences are left to construct, construe, and contain an elusive overarching political message in an architectural layout that deemphasizes consensus.

This curatorial strategy might not be entirely successful if visitors are unfamiliar with Hall’s work in cultural studies. The six artists’ work, however, could be loosely thought of as three pairs in dialogue. Together they emphasize the role of personal perspective and challenge the idea of objective history. Historical facts, coloured by interpretation, are only as important as the story we use them to tell.

Terry Adkins’s Flumen Orationis (From the Principalities) pairs Martin Luther King Jr.’s 1967 speech “Why I am Opposed to the War in Vietnam” with music by Jimi Hendrix. Set against a pulsating sequence of black and white archival photos of dirigibles, the video projection combines King’s cyclical oration and Hendrix’s exaggerated style. The shifting gives the image foregrounds a three-dimensional quality, while the crowds shown maneuvering balloons and airships emphasize the blurring of boundaries between military and civilian life.

Adkins’s work weaves together civil rights, economic justice, and anti-imperialism with the contemporaneous counterculture epitomized by Hendrix at Woodstock. The rock, oratory, and image elements set a chaotic tone, with continuous speech and flickering photos creating a punctuated and jarring atmosphere in the darkened gallery.

Similarly, the rhythmic quality of Steve McQueen’s End Credits highlights the systematic state-sanctioned violence of McCarthyism. The work consists of scanned images of now-declassified FBI surveillance files kept on Paul Robeson, an American singer, actor, and Civil Rights activist with pro-Soviet stances. Robeson’s political activism resulted in him being blacklisted by the US government and denied a passport, which severely limited his artistic career and international activism.

In End Credits the FBI files are screened as rolling film credits, while an unemotional narrator reads aloud each investigative report’s serial number and observations on Robeson’s activities and affiliations. McQueen’s repetitive and seemingly mundane treatment of Robeson’s political persecution underscores the bureaucratic power used to systematically curtail dissent during the Cold War.

Zineb Sedira’s Gardiennes d’images (Image Keepers) is a video installation bringing together oral history and photographic archives. It projects images by Mohamed Kouaci beside a video interview with Safia Kouaci, his wife, recalling the couple’s role in Algeria’s decolonization.

Mohamed Kouaci was a photographer who documented the Algerian Revolution, its key moments and leading cultural figures, including visits by Frantz Fanon and Patrice Lumumba. He and Safia were active members of the FLN in Paris and later the Algerian government-in-exile in Tunis. Mohamed Kouaci was the only Algerian photographer employed at the Ministry of Information during the revolution and played a critical role in defining the visual culture of the independence movement.

Sedira’s project aimed to preserve the rare photographs, while presenting a new perspective on French colonial history. Kouaci’s photos are visual remnants of the revolutionary struggle and a counterpoint to the predominance of French reporters in depicting Algeria’s revolutionary war. By pairing the photos with present-day interviews, Sedira emphasizes history as a living process in which meaning is constructed in relation to the present.

Also splicing fragments of the past, Shelagh Keeley’s installation features two large-scale works in the Power Plant’s clerestory. The two murals scale the height of the gallery walls, completely dominating its narrow space and visitors’ field of vision.

Notes on Obsolescence was created in situ and consists of the visual traces of Keeley’s body movements in graphite, paint and wax, covering an entire wall of 25 x 40 feet. Her drawings are interspersed with photos of abandoned textile looms in Germany, cascading webs of thread and mechanical parts that create a painterly collage effect. Keeley quotes Marshall McLuhan’s unpublished text, “A Note on Obsolescence,” which stressed the critical role of technological change in catalyzing innovation.

This mural directly faces 1983 Kisangani, Zaire, a series of photographs taken by Keeley on her trip to East and Central Africa in 1983. The images were taken covertly in the former Zaire, where photography was banned under Mobutu Sese Seko’s rule. Keeley’s photographs are documents of late Modernist architecture from the Belgian colonial era—buildings that were subsequently destroyed in the Democratic Republic of Congo’s civil wars. Today, the DRC continues to be affected by conflict over the country’s mineral wealth. 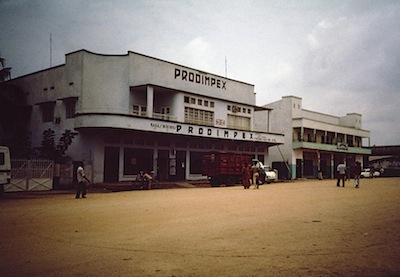 Keeley’s installations use photographic technology and drawing to initiate a conversation about her personal engagement with conflict and globalization. She recycles technology and fleeting historical events to create engrossing visual effects at large scale.

The exhibition’s namesake artwork is John Akomfrah’s video triptych, whose three screens dwarf the cavernous gallery. The Unfinished Conversation takes Stuart Hall’s personal narrative to explore the experience of immigration, race, and difference in the UK. Combining news footage, archived images, and biographical elements, the film points to personal identity and memory as contested products of British colonialism. It compares current and past images to challenge the tendency to view history as linear and sequential.

For Hall, the conversation on difference and identity in post-colonial Britain is forever unresolved. Essential elements of the Empire, such as racial difference, colorism, and class hierarchy, will continue to emerge as long as British society fails to confront its colonial past. Hall draws a direct connection between the emergence of multiculturalism and British colonial rule. Multiculturalism is not only manifested by waves of labor migration, but exists as a cultural policy shaped by the dislocation, memories, and cultures of the Other. 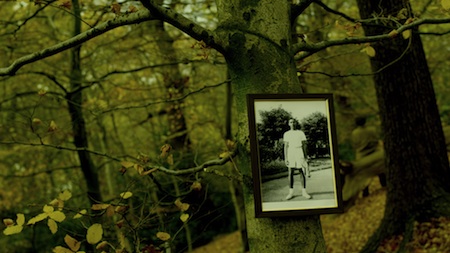 Sven Augustijnen similarly focuses on identity formation as a legacy of empire. Set in a small cinema, Spectres is a feature-length film exploring the contradictory accounts of the assassination of Patrice Lumumba, the DRC’s first democratically elected Prime Minister. Crudely shot on a handheld camera, it follows Jacques Brassine de la Buissière, who worked as a government official and defended Belgian economic interests in the DRC’s mineral-rich Katanga region. Brassine retraces the events and locations leading to Lumumba’s execution, including conversations with family members present in 1961.

In a sardonic twist, the film reveals Brassine as a former civil servant whose identity is intertwined with the mythology of Lumumba’s death. In a subconscious absolution of guilt, he comes to identify with the political agenda of his colonial overseer. Brassine’s retelling largely absolves the Belgian government of responsibility for the assassination, despite evidence that suggests Belgium deliberately destabilized the Congo by backing Katangan secession. When Lumumba sought Soviet assistance, the CIA covertly supported Mobutu’s 1965 coup d’état and was complicit in Lumumba’s murder.

Art historian T.J. Demos points to the contradictory interpretations and repressed histories that continue to haunt post-colonial Belgium and today’s Democratic Republic of the Congo. In presenting confounded identities born out of Belgian rule and the DRC’s proxy war, Augustijnen reveals how personal convictions can be inextricably linked to historical anecdotes. Pitting Brassine against the facts of Belgian rule, Spectres blurs the boundaries between personal facts and historical fiction.

The Unfinished Conversation: Encoding/Decoding unites disparate topics and artists by their challenge to orthodox histories. The installations and films borrow and reconfigure archives, imagery, sound and technologies to manipulate both received and marginal historical accounts. By presenting stories and media in fragments, the exhibition leaves visitors to deduce meaning and implicates audiences in processes of myth making and historical revision, highlighting the power relations that create official history.

column by Esther A. Armah
BEWARE! Statementism and Tweak-o-nomics
Poetry by Mona Kareem
The Final Hours of a Statue
Conversations by Nathan Suhr-Sytsma
What binds us, in this boat: Poet ‘Gbenga Adeoba on migration
blog by Warscapes
Open Call: The Corona Notebooks
column by Esther A. Armah
How To Talk About Racism in Britain
Literature by Robtel Neajai Pailey
This Is Our Country
Reviews by Nirupa Umapathy
The War on Terror Goes on Trial
column by Esther A. Armah
the STAYED and the STOLEN: Emotional Economy and the 1619 Project
Reportage by Priyamvada Gopal
Insurgent Empire: Anticolonial Resistance and British Dissent
Reportage by Lital Khaikin
Decay of the Third Kingdom: Israeli Nuclear Development, and the Future of the Negev Desert, Part Three
Like any of the articles? Support our work.
Donate Now