On the eighth floor of the Whitney Museum of American Art, a large projection brings viewers back to the aftermath of the attacks of September 11, 2001. One side of the screen plays O’Say Can You See, a two-channel film by artist, filmmaker and journalist Laura Poitras containing slow-motion footage of stunned onlookers at Ground Zero in the days following 9/11. A performance of the National Anthem recorded at a 2001 World Series game at Yankee Stadium plays solemnly in the background, looped and deconstructed. Describing her artistic process to journalist David Remnick, Poitras explains, “I think you learn a lot from these faces, trying to comprehend something that’s incomprehensible.”

The museum-goer then moves to the reverse side of the screen on which another event unfolds simultaneously: formerly classified footage shows the U.S. military’s interrogation of two prisoners captured in Afghanistan in November 2001. Osama bin Laden’s driver Salim Hamdan crouches on the floor of a dark room. An armed guard stands in the background and an interrogator asks him a series of circular questions in choppy Arabic.

“Who wrote the letter?” the interrogator asks.
“My wife,” answers Hamdam.
“What is the name of your wife?”
“Saboura.”
The footage is blurry at times, freezing and breaking into VHS static noise.
“Why did she write Fatima at the bottom?”
“To remind me of our daughter Fatima.”
A bag is placed over the prisoner’s head and he is lead out of the room.
The tape ends abruptly. In 2002, Hamdan is sent to Guantanamo.

This is the first piece in a series of installations created by Poitras for her first solo museum exhibit. It weaves together subjects she has previously examined, including mass surveillance, the war on terror, the U.S. drone program, Guantanamo Bay prison, military occupation and torture. The reverse-screen installation introduces the viewer to the dialectical nature of each work. Each piece has its “other,” layered with an alternative reality that is often dark, violent and unseen. 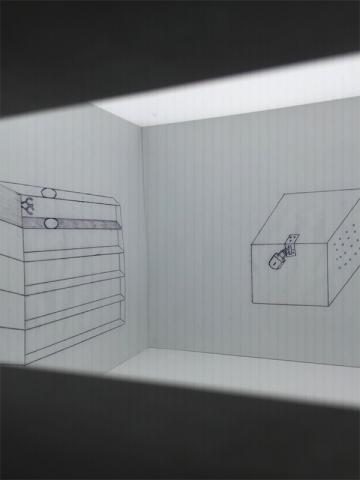 The title of the exhibit - Astro Noise - refers to the faint background disturbance of thermal radiation left over after the Big Bang, most evident in the form of microwaves that pervade the universe, unconnected to any specific source. Astro Noise is also the name Edward Snowden gave to an encrypted file containing evidence of NSA mass surveillance that he sent anonymously to Poitras in 2013. Snowden was impressed with her previous documentaries on the post-9/11 world, including The Oath and My Country, My Country, as well as “her exacting focus on detail and process [that] gave her a natural talent for security.” Their top-secret correspondence, in which Snowden revealed vast networks of mass surveillance in the U.S., resulted in Citizenfour, Poitras’ Oscar-winning film that completed her “9/11 Trilogy.” As she communicated electronically to the man she knew only as “CITIZENFOUR,” Poitras was terrified, aware of the risks to her safety and never knowing who was following her.

In 2006, after completing My Country, My Country, a documentary about the lives of Iraqis under the U.S. Occupation, Poitras was placed on a secret government watchlist and has consequently been detained and interrogated more than fifty times. Relocated in Berlin, she wrote in her journal on February 14, 2013: “Reading 1984 again is somehow an extension of my reality. God I’m tired. Will I ever be able to sleep again?” 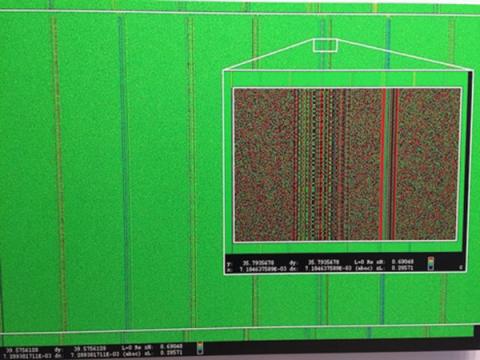 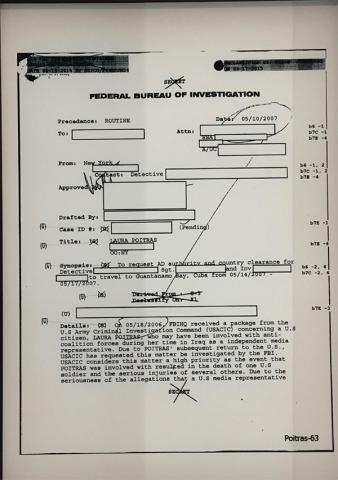 In the installation entitled November 20, 2004, Poitras displays the files she received after filing a lawsuit against the U.S. government in 2015. The series of highly redacted documents reveal that she was the target of a classified national security investigation conducted by the FBI and undisclosed intelligence agencies. Next to these documents is the footage that landed her on the watch list in the first place, an eight-minute video clip of an Iraqi family on their rooftop, watching gunfire on the streets. Children in their pajamas describe how they are “shivering” with fear, while simultaneously playing and joking around with one another. Appearing at the end of the exhibition, it is the show’s calmest moment. In an audio clip, Poitras’ voice tells visitors: “The government never asked to see what I filmed that day.”

Yet while Poitras’s life and work has been entangled in a web of surveillance and secrecy, Astro Noise is not entirely about her. It is not about the breaking news of NSA surveillance that she helped bring to light alongside journalist Glenn Greenwald. It is not a cinematic reveal, as the reverse-screen instillation in the first room of the exhibit might suggest. Instead, Poitras sets up a highly immersive environment in which the museum visitor becomes the protagonist, asked to contemplate his or her own positionality and responsibility in the so-called “war on terror” that defines our world.

The invitation to participate begins in the second gallery room, in which visitors can lie down on a carpeted platform in a dark room and gaze up at a projection of the night skies over Yemen, Pakistan and Somalia, countries where the U.S. carries out drone strikes and “targeted killings.” It also includes overhead footage from Creech Air Force Base in Nevada, where the military tests its unmanned aircrafts. The visitor assumes Bed Down Location, the title of the installation and the military term used to describe the sleeping coordinates of people targeted for assassination.

As curator Jay Sanders explains it in the accompanying book to the exhibit, “The night sky in Bed Down Location is populated with unseen drones yet visually calls to mind a planetarium or James Turrell’s skyspaces: the celestial reveal.” Yet while the view from below induces a sense of calm, the soundscape immerses the visitor in the disorienting buzzing of drones, voices of drone pilots, and radio noise. As Nasser Hussain writes in Phenomenology of a Drone Strike, “If drone operators can see but not hear the world below them, the exact opposite is true for people on the ground.” Many people from the tribal areas of Pakistan (FATA) describe the sound as a low-grade, perpetual buzzing, an anxiety-inducing signal that a strike could occur at any time. Poitras creates this phenomenological soundscape, in which one can hear what potential drone victims hear. While the view from the drone erases the body on the ground and presents a “clean war” in which targeted human subjects are reduced into digital data, Poitras’ installation places the audience on the other side of this gaze. 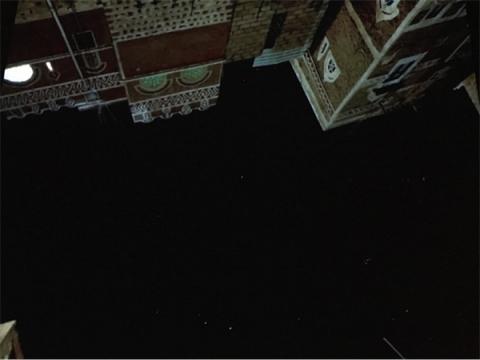 In the final room of the exhibit is an instillation titled Last Seen that projects a live-feed of everyone currently in the Bed Down Location gallery and includes a stream of the data picked up by visitors’ personal devices from Wi-Fi Sniffer software. This piece is particularly chilling, as it ties together U.S. drone warfare “abroad” to policing “at home.” Yet the expansion of militarist logic from the battlefield into civilian life looks rather mundane. Through widespread reliance on Google Earth, Facebook and even Amazon, surveillance has become a part of everyday life, ensuring that we are never alone.

Bed Down Location leads to the winding, L-shaped corridor of Disposition Matrix, in which visitors are confronted by a series of peepholes emanating with beams of light, illuminating slivers of papers, videos and still images. The content within these spyholes can be classified into two categories: the power of the state and those effected by it. The former works through concealment, obscuration and denial, veiled in an aesthetic of officialdom and business-as-usual: a 2002 memorandum detailing the CIA’s increasing cooperation with the NSA; a 2008 Department of Defense classified memo about when a cyber attack constitutes an act of war; an article describing the NSA’s procedures for choosing which candidates to put on a terrorist watchlist; a map of access points for BLARNEY, a surveillance program providing data to the NSA, FBI and other agencies. Others peepholes reveal colorful, grainy close-ups of intercepted signals collected through ANARCHIST, a classified program run by the UK intelligence agency Government Communications Headquarters (GCHQ).

Alongside official, top-secret state media are video testimonial of a Guantanamo prisoner, footage of the destruction wrought by a U.S. drone strike on a wedding party in Yemen, line drawings of torture devices at secret CIA detention sites by former prisoner Mohamed al Shoreiya Ben Soud, and footage of an Abu Ghraib prison inspection filmed by Poitras herself in 2004. This type of evidence represents what Nicholas Mirzoeff calls “countervisuality,” a contestation as to who is capable of visualizing events, through alternative subaltern or decolonial readings.1 The definition of legitimate acts of war typed up on official pieces of paper stands in devastating contrast to the human debris left behind after a drone attack. These are the narratives that the official frame would like to throw out, a remainder that exceeds the neat representations of risk and value that the war on terror aims to put forth: that of innocent people who are wrongfully targeted in drone strikes or tortured in prisons, and the liberties and human rights that are sidelined in the surveillance state.

Poitras constructs an image of the “public secret,” at once shockingly unbelievable and glaringly obvious. The grainy image of an Israeli Heron drone carrying armed missiles confirms what the public seems to know all along, despite the government’s refusal to confirm the existence of such missions. A 2005 memo by a former interrogator at Abu Ghraib that described the site as a “goldmine of intelligence” and a “lifetime opportunity” conjures the now-public photographs of torture and prisoner abuse. In contrast to the so-called “bad apple thesis” in which instances of violence are seen as minor exceptions to U.S. moral superiority, Poitras seems to be in agreement with Susan Sontag, who suggested that the photographs taken at Abu Ghraib “are us.” Through the act of seeing, contemplating, staring, gazing, listening, observing, peering and spying, the exhibit reveals the ways in which we are already implicated.

Shimrit Lee is a PhD candidate in Middle Eastern and Islamic Studies at New York University. Her research concentrates on visual cultures of Israeli militarism with a focus on how modern warfare is imagined, exhibited and commodified in virtual spaces such as international arms expositions, cyber and mock urban training grounds, videogames and war apps.

Reviews by Nirupa Umapathy
The War on Terror Goes on Trial
Reviews by Jess Rohan
What Machines See: Trevor Paglen on Invisible Images
Conversations by Gabrielle Spear
Iraq 2103: Sci-fi Against Empire
Art by Cinzia D'Ambrosi
Life Under the Color Grey
Conversations by Deddahi Ould Abdallahi
The Guantánamo Diarist's Hometown Tormentor
Opinion by Suchitra Vijayan
Curfew is the Camp
Reviews by Gareth Davies
The Confession: Living the War on Terror
Reviews by Kai Krienke
Imaginative geographies of Algeria's dark decade
blog by Nooreen Reza
#SlavesofFATA and dissent on social media in Pakistan
blog by Michael Bronner
Freedom for "Guantánamo Diary" Author Mohamedou Slahi?
Like any of the articles? Support our work.
Donate Now