"Be peaceful, be courteous, obey the law, respect everyone; but if someone puts his hand on you, send him to the cemetery." - Malcolm X (Message to the Grassroots speech on November, 9, 1963)

Fifty years ago today, Malcolm X was assassinated by three members of the Nation of Islam while he was preparing to deliver a speech to the Organization of Afro-American Unity at the Audubon Ballroom in Manhattan, NYC. Above is the image of The Audubon Ballroom stage after the murder. Circles on the backdrop mark bullet holes. After leaving the Nation of Islam on March 8, 1964, due to conflicts within the organization, deaths threats and hostile phone calls became a regular occurrence in the human rights activist's life. The FBI recorded a phone call during which Malcolm X's wife, Betty Shabazz, was told to tell her husband "he is as good as dead."

The Audubon ballroom in upper Harlem, New York, after it was roped off by police following the assassination of Malcolm X, February 21, 1965.

The FBI uploaded classified documents on Malcolm X via The Vault—the Bureau's Freedom of Information Act library. The documents include files detailing surveillance of the activist's funeral, interviews of the suspects in the assassination, and observations of Malcolm X's movements throughout his lifetime. Click below to access The FBI Vault Records on Malcolm X:

Although the online documents are extensive, many feel they are not enough. An online petition created by Paul Bitakaramire, requests that President Obama signs off on the publication of all federal government records relating to the assassination of Malcolm X. The petition mentions disappointment in a 2011 decision not to re-open the investigation after Manning Marable's biography, Malcolm X: A life of Reinvention was published. After the book was published, news emerged that a man who had not been arrested for murdering Malcolm X, but was long suspected of doing so, was living in Newark, New Jersey, under a false name. More information can be found here.

Malcolm X in 1964.  Photograph by Ed Ford for the New York World Telegram via Library of Congress.

Whether or not there were guiding hands behind the assassination of Malcolm X has long been the subject of debate in the years since his death. The Shabazz family have believed that leaders of the Nation of Islam were behind the assassination. In a 60 Minutes segment, "Who Killed Malcolm X?" correspondent Mike Wallace and one of Malcolm X's daughters, Attallah Shabazz, sat in an interview with Louis Farrakhan—the current leader of the Nation of Islam. Farrakhan acknowledged that words he spoke may have contributed to the murder. Farrakhan told Wallace and Shabazz, "I genuinely hope that perhaps a healing can come to Ms. Shabazz and her family, as I hay have been complicit in words I spoke leading up to February 21. I acknowledge that, and regret that any word that I have said caused the loss of life of a human being." Watch the video below:

Although both Malcolm X and Martin Luther King Jr. were devoted to the cause of black rights, the former took a much different approach to King and often had harsh criticisms for King's peaceful approach, or "non-violent insistence." Below is one instance noting Malcolm X's disapproval of King's methods:

The influence of Malcolm X has reached far and wide; from artists to filmmakers and city street developers.

In 1992, Denzel Washington starred in the biographical drama about the assassinated civil rights leader. Watch the trailer below:

Malcolm X has had a lasting impact on people interested in human rights and campaigning for equality for all. The Activists of New York Tumblr includes two photography series displaying the significance Malcolm X's words have, even today. 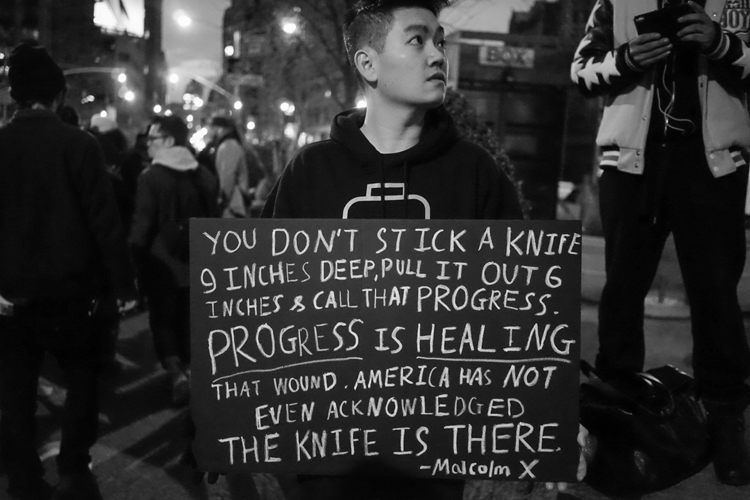 Photo via Activists of New York

Photo via Activists of New York

Criticized during his life, so too was Malcolm X excoriated after his death. The Autobiography of Malcolm X, written by Malcolm X and Alex Haley, was attacked for detailing Malcolm X's criminal life prior to becoming a Civil Rights leader, as well as for its black rhetoric which heavily criticized whites and their treatment of African Americans. According to the Howard Tilton Memorial Library, the autobiography was challenged by municipal and education authorities throughout the 1960s and 1970s. Many years later, in 1992 and 1993, Florida parents and authorities worked to keep the book out of classrooms because they believed the language encouraged racism against whites.

Malcolm X: By Any Means Necessary by Walter Dean Myers, is a comprehensive, yet succinct account of Malcom X's life. The biography introduces readers to Malcolm X's life, the connections he made, and detailed accounts on the people who influenced his deeply entrenched views. The text, instead of presenting a specific angle on Malcolm X, allows readers to draw their own opinions of the distinguished leader without having to sift through unnecessary speculating conspiracies of his assassination. 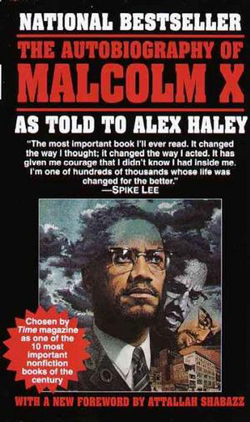 Reviews by Philipp Schulz
Born of War: Uganda and Post-Conflict Integration
Opinion by Michael Busch
What's In Store for Betsy DeVos
videos by
Patrice Lumumba: Rare interview footage before his assassination
Opinion by Ikram Ullah
A Century in Defiance
blog by Jessica Ling
Today in History: Happy 85th Birthday, Nawal El Saadawi!
blog by Diana Koehm
Today in History: Azerbaijan Turns 25
videos by Jessica Ling
Thomas Sankara: The Upright Man (A documentary)
Conversations by Michael Busch
"Next Time They'll Come to Count the Dead": A Conversation with Nick Turse
blog by Melissa Rodriguez
UN report: Syrian government is exterminating its own people
blog by Deepali Srivastava
The Panama Papers aren't about Panama
Like any of the articles? Support our work.
Donate Now